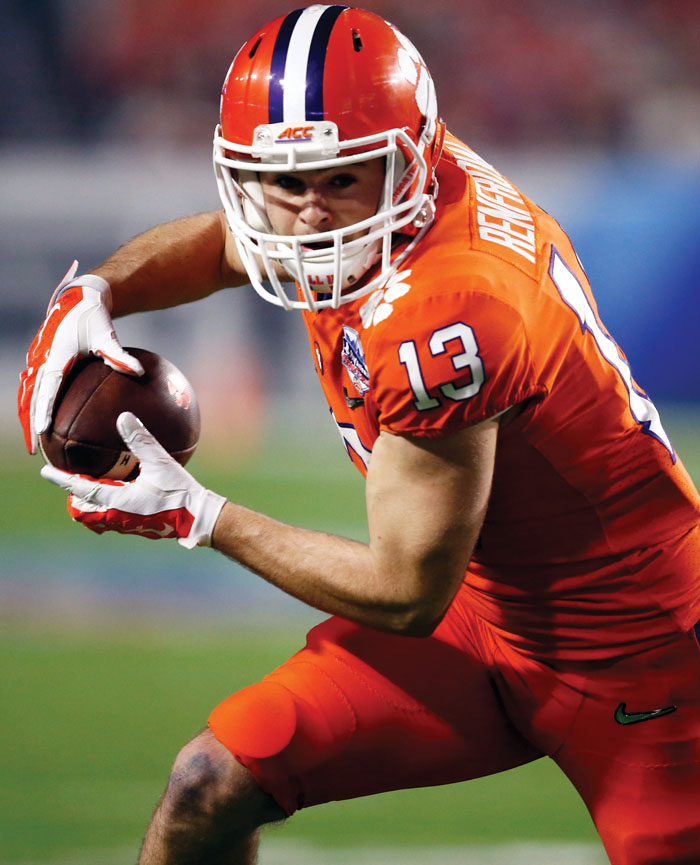 FILE - In this Dec. 31, 2016, file photo, Clemson wide receiver Hunter Renfrow (13) runs with the ball during the Fiesta Bowl NCAA college football game against Ohio State, in Glendale, Ariz. Renfrow, whose TD catch led to a national title, is already a folk-hero for Tiger fans. Now, he'd like to be a regular contributor and main cog of the offense. (AP Photo/Rick Scuteri, File)

But there was Renfrow at a Brazilian steakhouse on Hilton Head this summer alongside bigger teammates — defensive linemen Christian Wilkins and Dexter Lawrence and offensive lineman Mitch Hyatt — all projected as high NFL draft picks the next two seasons.

“I know what you three play. What do you play? Are you a student manager?” Renfrow remembered the owner asking when he met the group.

The sticky handed, super-fast Renfrow hopes to wipe out those question s once and for all with a bigger role during his junior season.

“I want to help this team anyway I can,” Renfrow said.

Renfrow began his time at Clemson as a walk-on who sat out 2014 and evolved into one of quarterback Deshaun Watson’s favorite targets. Renfrow’s value shown brightest in Clemson’s two national title games with Alabama where he combined for 17 catches and four touchdowns against the Crimson Tide’s group of NFL-ready defensive backs.

The highlight was Renfrow’s pitch-perfect route on Clemson’s final play last January, a two-yard catch from Watson with a second left that lifted the Tigers to a 35-31 victory.

The image of Renfrow’s grab was captured forever on Sports Illustrated’s cover — and for Renfrow, it seems like he has signed thousands of copies of the magazine for giddy Tigers fans since then.

“It’s going to be a platform that I’ll have for the rest of my life to engage people with,” he said. “I love that.”

What he’d love this season is to make more of a mark on Clemson’s offense.

Renfrow started 19 of 26 games the past two seasons with 77 catches for 987 yards and 11 TDs. But the Tigers offense was filled with talented pass catchers like NFL first-rounder Mike Williams, Clemson’s all-time receptions leader Artavis Scott and tight end Jordan Leggett.

After making a difficult sideline catch at practice last week, someone called out to Renfrow, “You catch everything.”

“I have to,” Renfrow responded with a grin.

“It’s what drives him to get better,” Scott said.

Renfrow wants to expand his role to special teams on punt returns, using his sure hands and vision once he’s caught the ball to make an impact.

Clemson coach Dabo Swinney stopped betting against Renfrow’s ability at training camp three years back. Renfrow came to the Tigers out of Socastee High near Myrtle Beach who projected more as a college baseball prospect than receiver.

But Renfrow wanted to play big time football and gave it a run with the Tigers. Swinney and Scott saw early on that Renfrow was smart and skilled, overcoming his lack of height with precise routes and a drive to hold on to anything thrown his way.

“He can change direction on a dime and make you miss in a phone booth,” Swinney said. “And he’s fast, too, he’s got some long speed.”

Swinney thinks Renfrow will show that off more this season as a focal point of Clemson’s attack.

Quarterback Kelly Bryant, a junior most likely to start off as Watson’s successor, said he and Renfrow have worked together to make sure the offense won’t miss a beat with so many pieces gone from the title run.

Renfrow happy to put the magazines in a box for now and take the next step forward.

“We’re tired of hearing about last year,” Renfrow said. “We’re ready to move on and develop the chemistry on this team.”