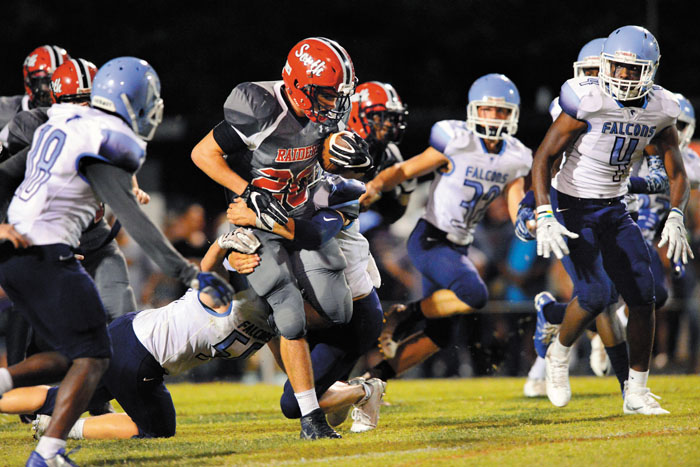 LANDIS — Optimism can be heard in the voice of South Rowan head coach Daniel Yow, the former Catawba College offensive lineman, as he starts this third season at the helm.

South enters its first football season as a 2A school, so the playing field for league games finally has been leveled.

South’s  student population was measured at 947 by the NCHSAA for the 2016-17 school year when the Raiders were competing — or at least trying to compete —  in a South Piedmont Conference that included Hickory Ridge (1,714 students), Central Cabarrus (1,704) and Cox Mill (1,688).  Robinson had 400 more students than South, while Northwest Cabarrus and Concord had about 300 more.

“I can remember one of our jayvee games with Central Cabarrus, and we’ve got 35 kids in uniform, and you look across the field, and they’ve got 75,” Yow said. “Sure, it’s been a challenge.”

Numbers alone don’t account for 100 percent of South’s recent football struggles — 10-65 the last seven seasons;  2-20 in the last two, with one of those two wins by forfeit. But numbers do explain a lot of it.

South is a new member of the Central Carolina Conference, which has eight Davidson schools and only two Rowan schools. That’s not ideal in some respects, but student population is  no longer a serious factor.

South is the same size as East Davidson and Central Davidson. South has quite a few more students than Thomasville, West Davidson, Salisbury and Lexington.

Oak Grove, which has a young student body, won’t be competing in varsity football this season, but plans to join the fun in 2018.

Travel-wise, South has more miles to ride now, but travel going north from Rowan is a lot less taxing than going to Cabarrus.

“I think there are a lot of positives to playing so many new schools that are new to us,” Yow said. “South hasn’t played most of these schools in a very long time, maybe never. There’s no history of our guys losing to them, and it’s a fresh start. I think we can be a sleeper. I think we’ll  surprise people who aren’t expecting us to be anything.”

Talent cycles, but Thomasville, Lexington and Salisbury will have faster football teams  than South most years. Those are always going to be three challenging football games for the Raiders.

Still, after a steady diet of Hickory Ridge, Robinson and Concord,  South fans will be glad to take their chances against a new set of opponents. There were conference games in recent years that were over in 10 minutes,. That’s not a good situation for anyone.

South will  have small numbers this year, but while those numbers probably would be disastrous in 3A, they might be survivable in 2A.

“We’ve got 65 kids out, but that’s 65 that are committed, so we’ll take it,” Yow said. “Numbers don’t mean anything if you don’t have commitment, and these kids have been with us all spring and all summer.”

“The offense was clicking pretty well in that first scrimmage and our new quarterback (Brett Amburn) looked good,” Yow said. “The second scrimmage was very  wet, and  Amburn was struggling to throw a slimy ball. He said he didn’t play well, but I’d attribute most of that to the weather conditions.”

If he succeeds, Amburn will be quite a story. He didn’t play at all as a freshman, played jayvee as a sophomore.

“He was fourth-string varsity QB as a junior, but he’s one of those kids who never stops working,” Yow said. “He’s made himself into a player.”

South lost Austin Chrismon and Sayquan Anthony, the duo that provided most of the positive offensive stats last season.

Patrick Brooks, the all-county right tackle, does return to lead the offensive line.

Defensively, Michael Sloop can be a force at linebacker, and Yow is excited about defensive back Malachi Littlejohn.

“Littlejohn is the voice we hear the most at practice,” Yow said. “And everything he says is positive.”

A coaching staff that is determined to see some sunshine after years of cloudy days, returns just about intact.

Yow will wear multiple hats as defensive coordinator and outside linebackers coach, as well as head coach.

The schedule is missing A.L. Brown for the first time since South opened the doors in 1961, but that’s a move that makes sense. As tremendous as the rivalry with the Wonders was back in the day, especially the 1980s, that era is long gone. A.L. Brown had won 13 of the last 14 meetings with South, mostly in ugly routs that weren’t helping either program much, and the gate wasn’t what it once was.

South’s rivalries with East Rowan, West Rowan and Carson will be continued in the Raiders’ three non-conference games. The Raiders open at Carson on Friday in what looms as a really huge contest for both programs. South’s lone victory last season came against Carson.

South will be dropping one of those three county games next season to make room on the schedule for Oak Grove. Probably West. South hasn’t beaten the Falcons since 2000.

Salisbury may become a much bigger rival for South than it has been. The Hornets and Raiders are conference opponents now for the first time since since 1973. South will play its regular-season finale against the Hornets at historic Ludwig Stadium on Nov. 3.