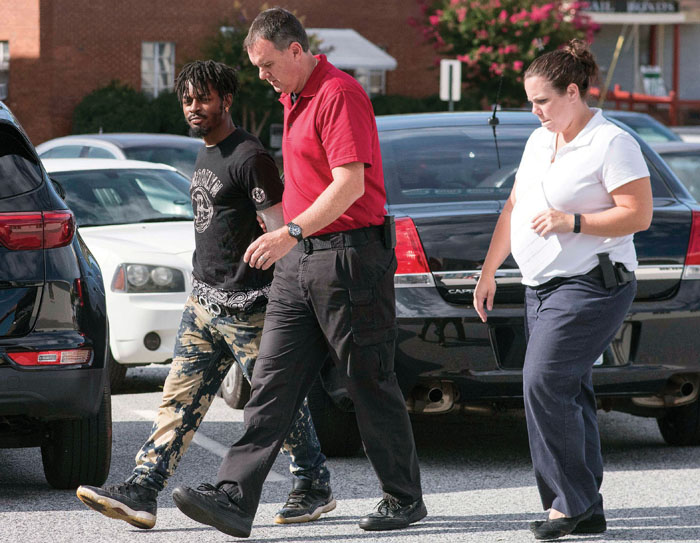 JON C. LAKEY / SALISBURY POST Salisbury Police arrested Joseph Whitmire on Tuesday after he turned himself on charges in connection with the murder of Shawn Spry. Tuesday, August 15, 2017, in Salisbury, N.C.

SALISBURY — A Salisbury man wanted in the murder of 21-year-old Shawn Spry declared his innocence after turning himself in to authorities Tuesday afternoon.

Joseph William Whitmire, 24, told reporters as he was being ushered into the Rowan County jail that Spry was his friend and he is sorry that he was killed.

“I wish I could talk to his family, but I’m innocent,” Whitmire said.

Whitmire, who is also known as Joey Portis, is being charged with murder and common law robbery.

Police were called to 210 S. Link Ave. on July 31 after someone walking by saw an unconscious man lying on the ground at the apartment complex. Family members and friends said Spry had been reported missing earlier that morning after he did not return home the night before.

Police investigators have not provided details about a motive. Spry was shot, police have said.

“We are also very grateful for the community coming together almost immediately after the death and supplying law enforcement with valuable information that helped solve this senseless crime,” Salisbury police officials said in a statement.

Whitmire will have his first appearance in court Thursday. He was placed in the Rowan County Detention Center under no bond.