The Dart: Family soaks up last bit of summer break with crawdad hunt 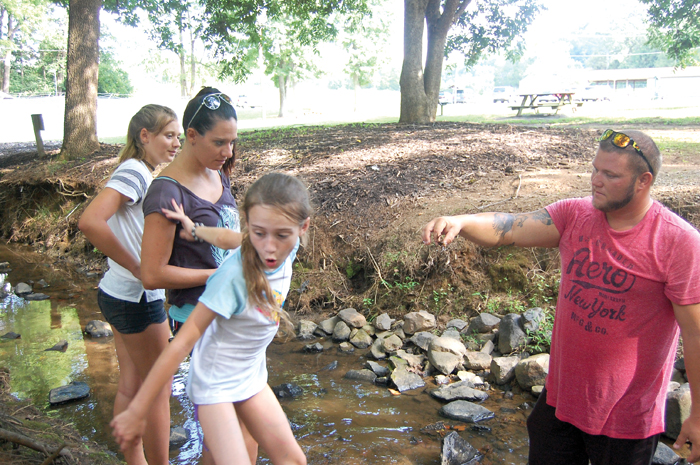 SALISBURY — Although the Bomelys said that they don’t come to Rockwell Park often, they sure knew how to find some crawdads in the park’s creek.

After spending the afternoon playing volleyball and basketball at the park, Rockwell resident Sarah Bomely, her two daughters – Kailin and Kierstyn – and Sarah’s friend, Hunter Hildreth, finished their day with a crawdad hunt in the creek that runs through Rockwell Park.

“We were just sitting up there, and I said, ‘Hey, I think there’s crawdads down there,’” Hildreth said.

Sarah said that, since then, they’d found “a bunch” that day, with the largest one being about as long as a man’s middle finger.

Hildreth did most of the heavy lifting in the search for them. In order to find the crawdads, he had to turn over large rocks in the creek and see what was hiding underneath.

Sarah, Kailin and Kierstyn helped from the shore, pointing when they saw movement or ripples in the water.

“Woah, what was that!” Kailin shouted, making Hildreth turn quickly toward where she was pointing.

When Hildreth did find one, he would grab it by its midsection and hold it out so that Sarah and the girls could have a chance to hold it.

Sarah and Kierstyn took him up on the offer several times, carefully avoiding the crawdad’s pinchers as Hildreth passed it over.

Kailin, the younger of the two girls, was less enthused by the idea.

She said that she wasn’t scared of them. She just didn’t want to hold them.

“I would hold them, but they have claws and pinchers,” she said.

When asked what it was like to hold one, Kierstyn said that its shell was “squishy” and that she was worried she would get pinched.

It wasn’t a far-fetched fear, either. In his hunt for crawdads, Hildreth got pinched several times, yelling out and shaking his hand off before diving it back into the shallow water.

Kierstyn said that they lived nearby the park, so they came every once in a while.

And, with the start of school fast approaching, the girls both knew that lazy afternoons at the park wouldn’t be possible for too much longer.

But Kierstyn, who is going into seventh grade, said that she was looking forward to heading back to school.

“I’m excited to go so I can get it done with,” Kailin said.