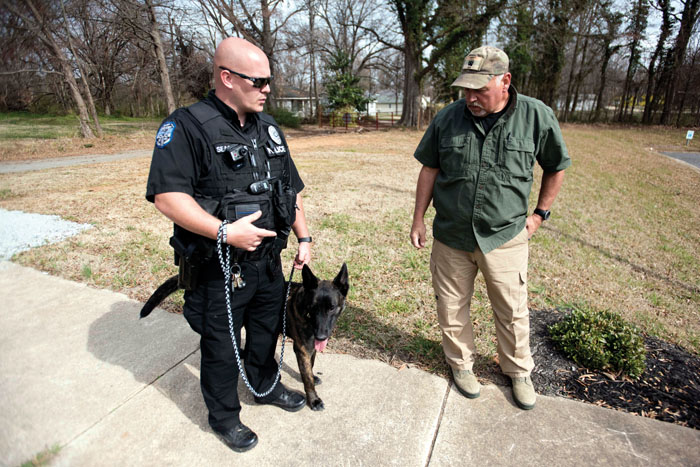 EAST SPENCER — What started out as a conversation with his neighbor was just the spark of inspiration Rod Graham needed to lead him to the East Spencer Police Department.

Graham, the owner of Graham Tree Nurseries LLC, learned from his neighbor that there were area police agencies that had small budgets and little of what they needed in the way of equipment.

Seagraves began over a year ago with the hope of establishing the first-ever K9 program. Seagraves started from scratch with research and fundraising efforts via community and business donations. Havoc, a mostly black Dutch shepherd, and Seagraves have been training together for sometime now.

On the officer’s wish list has always been a bulletproof vest for the dog. This week, Graham was able to make that happen.

Seagraves researched a number of vests and gave Graham a few options and let him choose what he wanted to purchase. Havoc was outfitted with an Armor Express Tex 10 provided by Dana Safety Supply in Greensboro.

“It’s so much hurt in the world and so much bad news and lives, especially children touched by drug use and abuse,” Graham said.

Graham said he’s not a millionaire, but he is financially able to share what he has with others.

Graham said he saw how passionate Seagraves was about his job and about his K9 partner.

For more information about the East Spencer K-9 program and its Go Fund Me effort, visit https://www.gofundme.com/EastSpencerK9 or email eastspencerk9fund@outlook.com.