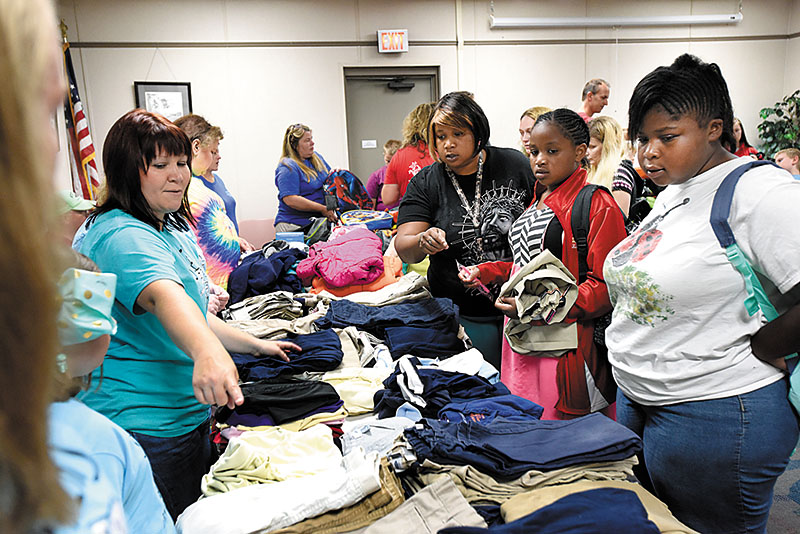 ROCKWELL — With the start of school just weeks away, many kids are clinging to the feeling of hitting snooze on their alarm clocks.

But on Saturday, for approximately 100 kids who lined up at the Rowan Public Library’s East branch with their parents and guardians, waking up early was essential to being prepared for their upcoming school year.

For the second year in a row, Saint Peter’s Lutheran Church hosted a school supply drive at the library’s east branch, located at 110 Broad St. in Rockwell.

The church group arrived early to set up the backpacks, arrange the tables and figure out the best way to get people safely into the building, since it was raining for most of the morning.

But the church members were not the first people to arrive. Shameka Jackson, a single mother of three, was there with her three children and her niece an hour and 15 minutes before 10 a.m., when the library doors were set to open.

“When we got here (at 8:45 a.m.) it was drizzling. It started pouring down about 9:15 real hard,” Jackson said. “I thought there would be a line, but there wasn’t nobody out there. I was shocked.”

Jackson said that changed around 9:30 a.m., when approximately 20 families began lining up outside of the library’s front doors.

By the end of the morning, when the drive closed at 11:30 a.m., approximately 65 families had come through to receive backpacks and supplies.

“They’ve got to have supplies for school,” Jackson said of her kids. “With me being a single mom, I’m kind of limited…so anything is helpful.”

Carol Goodman, who takes care of her six-year-old granddaughter, Jatelyn Spears, said that hearing about the drive was a big relief.

“We just found out about this yesterday,” Goodman said. “The librarian is actually the one who told us. We didn’t know. So yeah, we were excited, because it’s hard.”

Goodman said that both of Spears’ parents are heroin addicts, and that she had been raising Spears since she was 2 years old.

Sean Barrett, the pastor of Saint Peter’s, said that one of the reasons they host the school supply drives at the Rockwell library is because they want the drives to be accessible to area families.

“We are out in the country,” Barrett said of their church, located at 2510 Saint Peter’s Church Road between Rockwell and Salisbury. “So this is a little easier for folks to find.”

The 236 book bags offered at the drive — and the school supplies that were stuffed into each of them — were paid for almost entirely with money raised by children in the congregation.

“During children’s sermon, we have a ‘noisy offering.’ So it’s a big…bucket kind of thing and our children bring change every Sunday,” said Terrie Tidwell, the youth leader at Saint Peter’s. “And they put pennies, any types of change, some dollars, they put in there.”

Tidwell said that the children had been doing this collection for last year and that, just through the noisy offering, the church had raised about $1,000.

Then, with the help of a few other contributors, the church was able to raise an extra $250.

When the supply drive was finishing up around 11:30 a.m., many of the backpacks were still left sitting on the tables.

But Tidwell said that every one of them would go to a child in need, even if she “has to go door to door.”

She said that she would be personally delivering around 40 of the leftover bags to families that she visits on her weekly food delivery trips, done through a church program called Food for Thought.

She said that the rest will likely be distributed to area elementary schools.

There were two other school supply drives in the county on Saturday, Aug. 12.

Gethsemane Missionary Baptist Church, located at 719 S. Caldwell St. in Salisbury, had a school supply drive from 10 a.m. to 2 p.m.

The Refuge Church of God in Christ, located at 1202 Short St., had a “Back to School Community Fun Fest” from 11 a.m. to 3 p.m. It featured free food, free clothes and free school supplies.

In the driver’s seat: After 19 years of working…