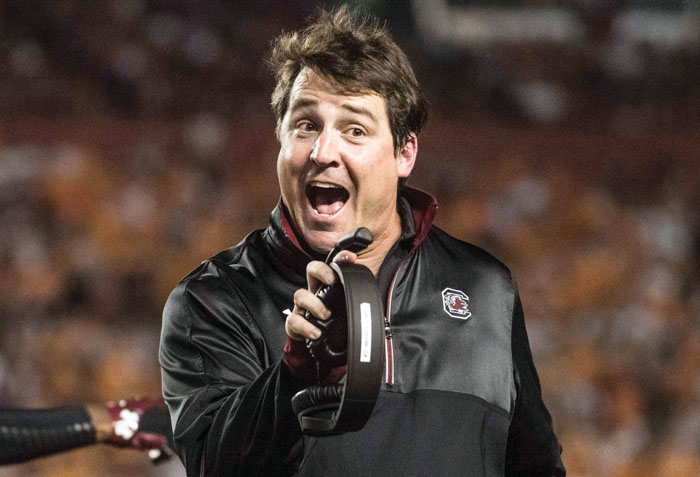 COLUMBIA, S.C. (AP) — Will Muschamp had a welcome start to South Carolina’s first scrimmage of summer drills — a three-and-out by his defense. For Muschamp, there were few better indicators that the challenge he’s laid down for his defenders since last season ended had been taken up by the Gamecocks.

“I do think that those guys have responded to our challenge to improve,” Muschamp said a short time after his team concluded a 140-snap scrimmage on a sticky, hot summer Saturday.

Muschamp has been seeking a better showing from his pass rushers and linebackers in year two than in his first South Carolina season, where the team ended next to last in stopping the run. It was only a couple of weeks ago before camp began that Muschamp was exhorting uncommitted high school players who could rush the passer to take a look at the Gamecocks.

But Muschamp said they’ve used speedy linebacker Bryson Allen-Williams, a fast, 230-pound senior, at defensive end at times to pump up the pass rush. Experienced linemen like Dante Sawyer and Taylor Stallworth, both seniors, have combined with sophomore D.J. Wonnum to make an impression on Muschamp two weeks into camp.

Defensive line coach Lance Thompson said Stallworth and Sawyer have stepped up their games and made an impact in practices. Stallworth, Thompson said, is a 6-foot-2, 305-pounder who’s got strength and speed to show out in the Southeastern Conference.

Where Muschamp thinks the group has room to grow after this scrimmage is in their focus. Too often, he thought players did not stay as engaged as a sequence continued as they’ll need to be when the Gamecocks open against North Carolina State in Charlotte, North Carolina, on Sept. 2.

“I don’t know how quickly we’re playing right now,” the coach said. “What we need to work on next week is sustaining drives on both sides of the ball, keeping our mental focus.”

That often disappeared last season as the Gamecocks were ninth against the rush in the Southeastern Conference. They were near the bottom of the SEC in sacks, allowing first downs and letting opponents convert on fourth down. It led to many frustrating moments for Muschamp, especially during his team’s 2-4 start.

An offense uptick, triggered by starting true freshman Jake Bentley at quarterback, helped South Carolina rally down the stretch to finish 4-2 and qualify for a bowl game. In the postseason, though, the Gamecocks’ defensive problems showed up once more as South Florida gained 469 yards and five TDs in a 46-39 OT win at the Birmingham Bowl.

The return of injured linebacker Skai Moore, the team’s top tackler his first three seasons who missed last year with a serious neck injury, gives South Carolina an experienced, polished leader on defense eager to finish his career with a flourish.

Two weeks ago, Muschamp only saw untested questions behind starting linebackers Moore, Allen-Williams and T.J. Brunson. Now, he thinks freshman Sherrod Greene and will be a major contributor.

In the secondary, senior Chris Lammons will be a leader and versatile performer who Muschamp could use at cornerback, safety or in a five-defensive back set. Safety Steven Montac, a likely starter, will miss about 10 days because of a stress fracture in his foot, Muschamp said.

One young player who was expected to play, defensive back Jaylin Dickerson, will need shoulder surgery and will miss the season, Muschamp said.

Thompson, the line coach, said the Gamecocks are still building up their depth, meaning young players will get their chances.

“At the end of the day, everybody we’ve got will have a chance to play,” he said. “And that’s OK.”