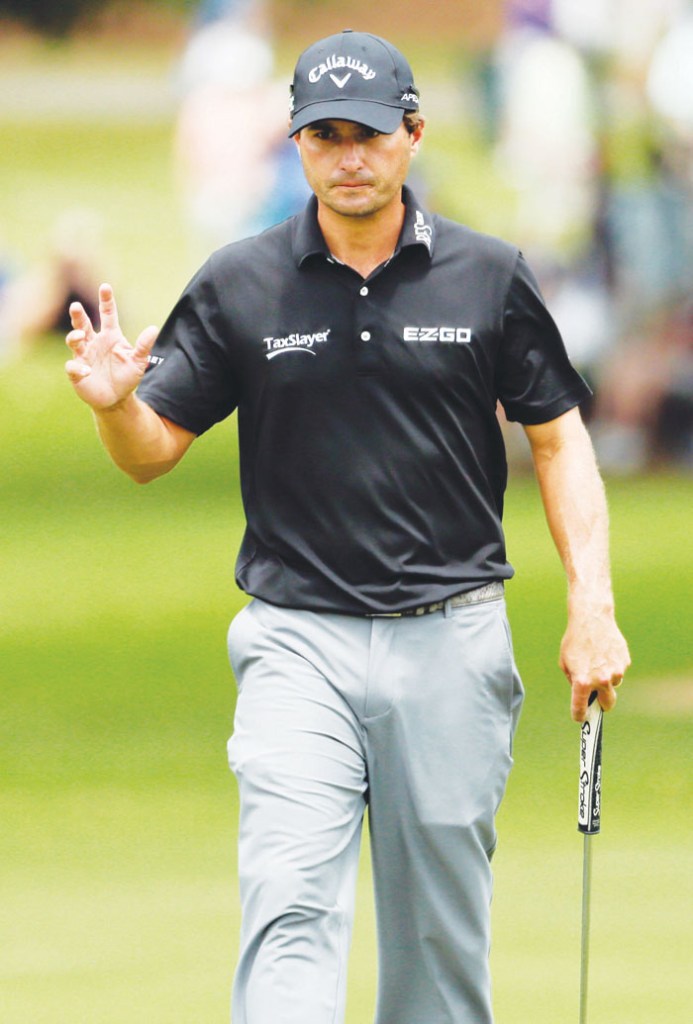 Kevin Kisner waves after a eagle on the seventh hole during the second round of the PGA Championship golf tournament at the Quail Hollow Club Friday, Aug. 11, 2017, in Charlotte, N.C. (AP Photo/Chuck Burton)

CHARLOTTE (AP) — Kevin Kisner survived a calamitous finish at the PGA Championship thanks to a good bounce off a bridge that allowed him to escape with a bogey and take a one-shot lead into the final round at Quail Hollow.

Kisner already gave up a two-shot lead with a 6-iron into the water on the 16th hole for double bogey.

Then, he nearly did it again at the end of Quail Hollow’s fabled “Green Mile.” His 7-iron went left toward the creek until it landed on the concrete bridge, sailed high in the air and disappeared in the thick grass on the hill above the water. Kisner did well to chop that onto the green and two-putt from 45 feet for a 1-over 72.

Jason Day wasn’t so fortunate, most of that his own doing. Day took a big risk and paid a big price, going from behind a tree to flower bushes, into the rough and short of the green. The final result was a quadruple-bogey 8, leaving him seven shots behind.

Kisner had the lead going into the final round, a great spot to pursue his first major championship.

He just doesn’t like what he sees in his rearview mirror, where the players are a lot closer than they once appeared.

Hideki Matsuyama made only one birdie and wasted two good scoring chances on the back nine. Then again, he had a rather dull finish that allowed him to salvage a 73 and leaves him only one shot behind as he tries to bring Japan its first major championship.

Chris Stroud, the last player to qualify for the PGA Championship, was briefly tied for the lead until he three-putted his last two holes for a 71. He was one shot behind and will be playing in the final group with Kisner.

“I’m happy I’m in the position I’m in,” said Kisner, who was at 7-under 206. “I had a chance to run away from guys and take people out of the tournament that were four or five, six back. And I didn’t do it. Now I’m in a dogfight tomorrow, and I have to be prepared for that.”

After the final hour of the third round Saturday, he should be prepared for anything.

Justin Thomas, the son of a PGA professional, had the right formula. He didn’t drop a shot over the last 12 shots and shot a 69 to finish just two shots behind along with Louis Oosthuizen, who saved par on the 18th with a bold shot for a 71.

It was everyone else in the hunt that fell apart.

Rickie Fowler, quietly lurking with four birdies in an eight-hole stretch, failed to birdie the par-5 15th — the easiest hole at Quail Hollow — and followed with a three-putt bogey on the 16th, an 8-iron into the water for double bogey on the 17th, and a three-putt bogey from just over 20 feet on the 18th. That gave him a 73, and after getting within three shots, he trailed by six.

Paul Casey also was in position until his shot on 18 missed by a fraction and settled in the rough above the hole. His chip ran off the green, and he made double bogey. Casey played the final three holes in 4 over and shot 74. He was seven behind.

The shocker was Day, the former No. 1 player in the world and a PGA champion two years ago. He looked more like Jean Van de Velde, only he was standing amid bushes of flowers instead of knee deep in the burn at Carnoustie.

Day was stymied by a pine tree, and instead of playing safe out to the fairway as Oosthuizen had done in the group ahead of him, he tried to hook an iron around the trees and the gallery to get a clear look at the green. But it went right into the flowers, and after a penalty drop, Day couldn’t even get that back to the fairway.

He came up short of the green on his way to a quadruple-bogey 8 and a 77. He left without speaking to reporters.

Of the 15 players who remained under par, Oosthuizen is the only one who has won a major, and that was seven years ago.

The South African had his own problems. His right arm tightened up on the front nine and he required a therapist to work on it. Then he hit a root on a shot with an 8-iron and bent the club, meaning he couldn’t use it when he needed it late in his round.

He still has a chance to add to that British Open title at St. Andrews in 2010.

“It’s the type of golf course you don’t have to go out and make birdies. You just need to keep everything together,” Oosthuizen said.

Kisner did that as well as anyone for so much of the day. He was rarely out of position except on the par-5 seventh when he hung a 3-iron to the right and near the hazard. He caught a decent lie and chipped close for his first birdie. And after ending a streak of 25 holes without a bogey, he two-putted the 14th green from 100 feet and two-putted the 15th green from 20 feet, both for birdies, to stretch his lead to two shots as players behind him were fading.

Kisner joined them with mistakes of his own, setting up a final round on a course that is playing as tough as any in the majors this year.