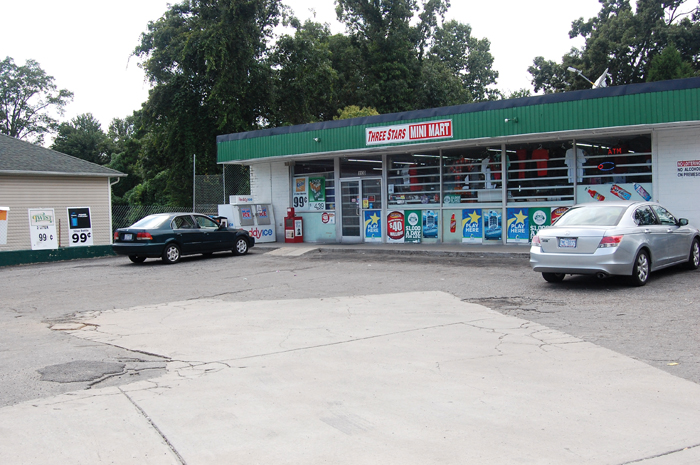 The Three Stars Mini Mart -- formerly known as M&L Mini Stop -- was the site of Saturday night's homicide. The victim and the driver met the suspect in this parking lot. (Jessica Coates/Salisbury Post)

SALISBURY — Another person in Salisbury has been killed in a homicide — the fourth fatal shooting within two weeks.

He was declared dead shortly after he arrived at the medical center.

He was driven to the medical center in a private vehicle, though the driver’s identity has not yet been confirmed.

When Salisbury police officers arrived at the medical center, they found out that Ramsey and the driver of the vehicle had met the suspect at the parking lot on North Main. An argument ensued and Ramsey was shot once in the chest.

Salisbury Police detectives say that they have good leads on the identification of the suspect.

Ramsey’s father, Jeff Ramsey Sr., said that his son was quiet and “centered his happiness around being free.”

“He wasn’t one to start trouble, but he was fearless,” Ramsey Sr. said. “You knew he loved you whether he was around every day or if you hardly ever saw him.”

Ramsey Sr. said that he had spoken with his son two hours before he was shot.

“We were talking about our future plans, our future dreams,” Ramsey Sr. said. “I said, ‘I’ll talk to you later.’ ”

He said that when he got the call that his son had been shot, he thought the injuries weren’t life-threatening.

“But then, when I got into Salisbury, (my daughter) Chandra said, ‘Daddy, Jeff’s dead.’ I wish I was there and able to hold his hand if he was going to die. I wanted to let him know he wasn’t alone.”

Ramsey Sr. lives in Statesville, but he said that many of his children — nine daughters and four sons — live in Salisbury.

“His sisters … he was their idol. He wasn’t the oldest, just the biggest. They looked to him because he was the peacemaker. If they had a problem, he’d talk to them.”

Ramsey Sr. said that Ramsey Jr. always liked to make himself available to people and to help with their problems.

When asked if he thought that could have led Ramsey Jr. into the situation that occurred at the North Main Street parking lot, Ramsey Sr. said it was “more than likely.”

“I’m not sure, obviously,” he clarified. “But he liked to fix something for people. If they needed something, he liked to go and fix it.”

Ramsey Jr.’s slaying follows that of Shawn Alexander Spry, who was found shot to death on South Link Avenue on July 31 and the fatal shootings of Anthony Gill and Da’Quan Robertson in downtown Salisbury early on July 29. Police have made arrests in the latter case and have identified a suspect, who remains at large, in the killing of Spry.

Anyone with information about the Ramsey case is asked to contact Salisbury Police at 704-638- 5333 or Crime Stoppers at 1-866- 639-5245. Tips may also be submitted online at http://tips.salisburyrowancrimestoppers.org.

School board to discuss principal pay