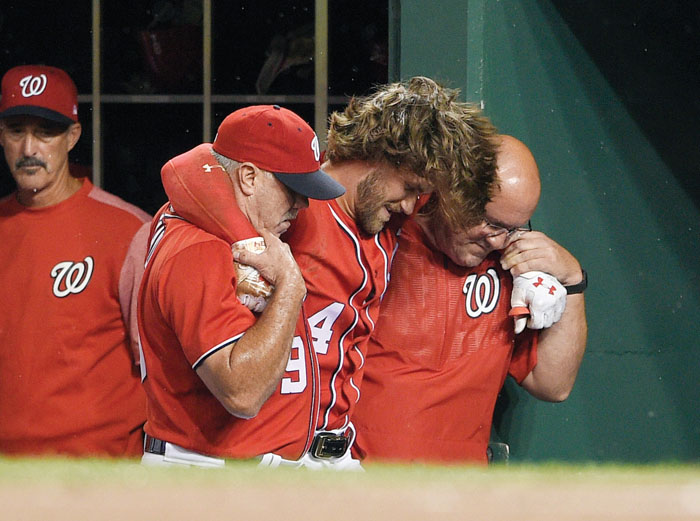 Washington Nationals' Bryce Harper, center, is helped in the dugout after he was injured during the first inning of the team's baseball game against the San Francisco Giants, Saturday, Aug. 12, 2017, in Washington. (AP Photo/Nick Wass)

WASHINGTON (AP) — Bryce Harper appeared to injure his left knee when he slipped on a wet first base, a potentially devastating blow to the NL East-leading Washington Nationals.

While running out a ground ball to the right side of the infield in the first inning Saturday night against the San Francisco Giants, Harper avoided contact with first baseman Ryder Jones and his left foot slipped on the base. His leg buckled , he went airborne and fell to the ground as his helmet went flying.

Harper clutched at his left knee after going down and was attended to by trainers. The star outfielder put no weight on his left leg as he was helped off the field by hitting coach Rick Schu and head athletic trainer Paul Lessard.

The game began just after 10 p.m. following a 3-hour rain delay. It was still raining when Harper’s injury happened.

Major League Baseball was in control of weather decisions because it’s the Giants’ final trip to Washington this season. The series opener Friday was postponed after a lengthy rain delay to be a part of a day-night doubleheader Sunday.

Harper was replaced by Andrew Stevenson, who took over in center field with Brian Goodwin moving to right.

Because of a bevy of injuries, the Nationals have used 12 outfielders this season. They have been without Adam Eaton since late April because of a torn ACL in his left knee that ended his season, Jayson Werth since early June because of a bruised left foot and Michael Taylor since July with a right oblique strain.

The Nationals lead the NL East by 14 games despite those injuries and more to starters Stephen Strasburg and Joe Ross, relievers Shawn Kelley and Koda Glover and shortstop Trea Turner.

Harper is under contract through next season and can be a free agent in the winter of 2018.

KXAN-TV reports Hall of Famer Frank Robinson recalled coining the nickname for his former teammate, after Baylor used that word in an interview to describe getting a couple hits that broke his slump.

Robinson acknowledged he “wasn’t too friendly with too many people in baseball” but said there was nothing bad he could say about Baylor, the 1979 American League MVP who died Monday after a 14-year battle with cancer.