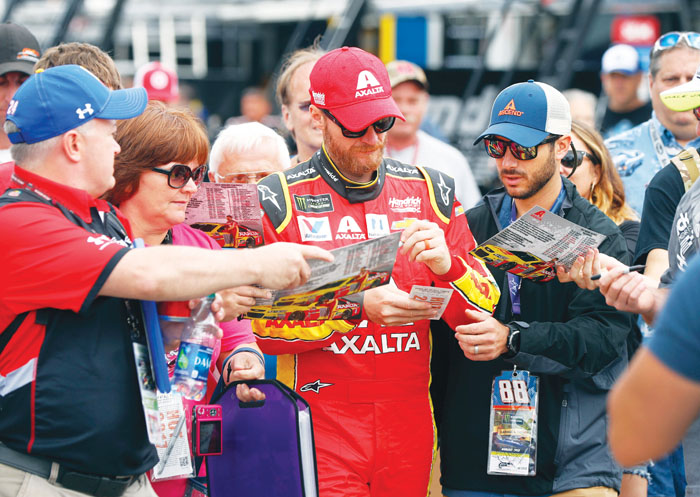 BROOKLYN, Mich. (AP) — Dale Earnhardt Jr. was racing for the win in a 1999 IROC event at Michigan.

Problem was, his opponent was in no mood to let him pass.

“Dad drove to the bottom so I just went around a little bit higher and it stuck, and I got along his outside,” the younger Earnhardt recalled. “I was going by and he hit me.”

Dale Earnhardt won that race over Earnhardt Jr. by 0.007 seconds on one of many memorable days at Michigan International Speedway for Earnhardt Jr., whose farewell tour is passing through the track this weekend. Earnhardt Jr. would go on to win Cup races at MIS in 2008 and 2012, and he’ll try to add another victory Sunday in his final race at the venue before he retires at the end of this season.

Those wins in ‘08 and ‘12 were Earnhardt Jr.’s only Cup victories from 2007-13. The latter snapped a 143-race losing streak. But his memories at Michigan extend further back than that.

The exciting IROC finish in ‘99 included some contact between Earnhardt Jr.’s car and his father’s — a fun story line if there ever was one. Later that year, Junior pulled away from Jeff Gordon — who was at that point the two-time defending Cup champion — for a win in a Busch Series race at Michigan.

“It seemed like only me and him were racing each other for the win. I was very proud of that because I thought he was the best in the sport at the time,” Earnhardt Jr. said. “It was like beating Jimmie Johnson if he came down to the Xfinity Series. So, that was a big deal for us.”

Earnhardt Jr. is winless over the past two seasons, and he has only four top-10 finishes this year. Over the past week, he has been involved in a bit of a back-and-forth with Kevin Harvick, who suggested Junior’s inability to achieve more success has hindered the sport’s growth.

But Earnhardt Jr. has been plenty competitive in Michigan over the years. In fact, only two active drivers — Kurt Busch and Matt Kenseth — have more Cup wins at MIS.

“We’ve got some really good memories here. It’s been a fun track,” Earnhardt Jr. said. “There has been some conversation about the 1.5-mile tracks with the words ‘cookie cutter’ and all that. That’s been a conversation for a couple of decades now. But this place here is, to me, the standard for the 1.5-mile or 2-mile race track. This place is so much fun to race on for a driver. It’s a great race track.”

Kyle Larson is trying for a third straight Cup win at Michigan after victories this June and last August. He’ll be in the spotlight Sunday after team owner Chip Ganassi gave him permission to go to Iowa on Saturday to race in the Knoxville Nationals.

Hendrick Motorsports teammates Johnson and Kasey Kahne both are on to backup cars after going into the wall during practice Saturday. Johnson also had to go to the backup car in June at Michigan after a practice mishap.

“You have to run so hard here that if the car slips it’s around and gone,” Johnson said. “I ran a half a second faster today in practice than I did in qualifying yesterday. So, with the grill open and tires on low pressure and all that, especially these morning sessions with overcast clouds you just run so hard that when something happens, it’s gone.”

Ford vs. Chevrolet is always a matchup to watch in Michigan. Larson won for Chevy in June, but Ford swept the top three spots in qualifying Friday, with Team Penske’s Brad Keselowski and Joey Logano going 1-2. Harvick was third.