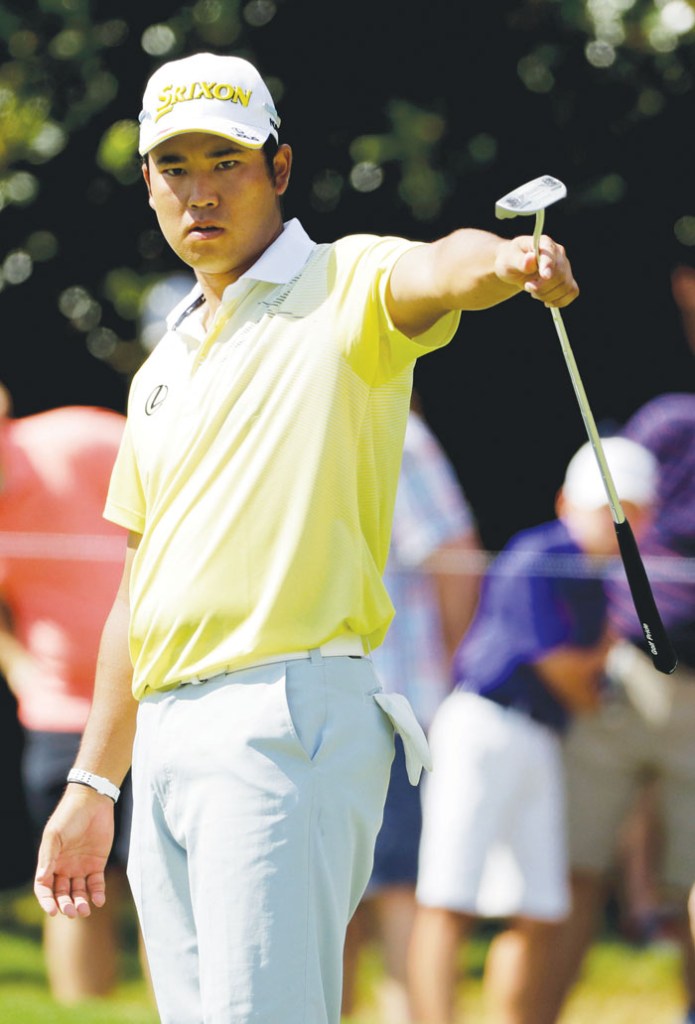 Hideki Matsuyama of Japan, watches his putt on the sixth hole during the third round of the PGA Championship golf tournament at the Quail Hollow Club Saturday, Aug. 12, 2017, in Charlotte, N.C. (AP Photo/Chris O'Meara)

Justin Thomas said it’s simply “not a lot of fun.”

Jason Day, well, he didn’t even want to talk about it, leaving the course Saturday without talking to reporters after an adventurous quadruple bogey likely took him out of contention for the PGA Championship. Day’s snowman dropped him seven shots behind third round leader Kevin Kisner.

Quail Hollow Club boasts that the 18th hole is one of the toughest holes in all of golf — and you won’t get much argument from the players this week.

“That is a really difficult hole,” Hideki Matsuyama said. “You can hit it right like Jason did today and then there is water on the left, so it is tough all of the way around.”

Rickie Fowler said other than the 18th hole at Sawgrass, he can’t think of a more difficult finishing hole in golf.

Of the 75 golfers who played the 494-yard hole on Saturday, only Thorbjorn Olesen and Patrick Cantlay made birdie. Golf clap for them and the 41 golfers who escaped with a par.

But there were plenty of other funny looking numbers on the scoreboard including 20 bogeys, 10 double bogeys, a triple bogey and Day’s disastrous quad.

The par-4 hole had a higher aggregate scoring average Saturday (4.6) than two of the three par 5s.

“That pin is just so tough,” said J.B Holmes. “You’re out there, hopefully you get it in the fairway and you just have to go at it because if you hit it 25 feet behind it, it’s just a tough 2-putt.”

For some players, the hole is borderline unfair.

The pin positon was six yards in front of the hole with a false front. There is a creek running along the left side and a couple of sand bunkers on the right side. Hit the wrong part of the green and it’s rolling off.

Webb Simpson, who is a member at Quail Hollow, said there is very small margin for error. He didn’t like the pin placement.

“The false front is eight yards, which means you are supposed to put the ball right of the hole,” Simpson said. “Now we have to get it past the hole so the ball doesn’t come back off the green. Little things like that, me and my caddie said if they just put the pin four yards farther back, then it’s still a really hard hole but it’s fair.”

Added Thomas, who made par on Saturday: “That tee shot, when you are not driving it well, it’s not exactly the most comfortable shot in the world. It’s a hard hole for everybody.”

Chris Stroud said he hit the best putt he hit all day on No. 18 — and it still didn’t go in.

“It’s difficult because you can’t leave it under the hole as the greens are firm,” Thomas said. “Then you hit to where I did and you have a treacherous 25-footer that you are trying to get down in two. It’s tough.”

Kisner played in the same group as Day, who got into trouble when he tried to snap-hook his second shot around a tree but slipped on the pine straw, sending the ball behind a bush. He had to take a penalty stroke but was still in trouble. In took him six shots to even the green.

While Day was blowing up, Kisner was having his own drama on the other side of the fairway after his ball hit a rock in the creek and bounced into the heavy rough, leaving him with a tricky downhill lie.

He managed to get it over the creek and onto the green and gladly settled for bogey, giving one shot back to the field.

“I wasn’t too concerned with watching Jason,” Kisner said of the antics on the 18th hole. “I was trying to figure out how the heck I could make five and get out of here. I don’t want to be there (Sunday) for sure.”