In the driver’s seat: After 19 years of working her way up, Dillard is head of Team Auto 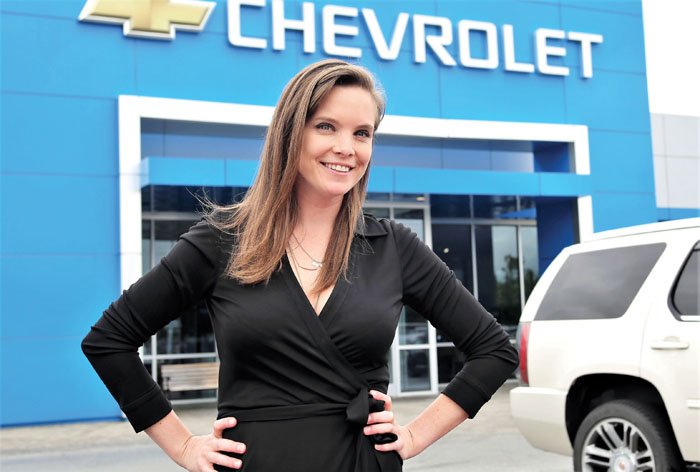 SALISBURY — It all started with hot dogs.

When Kristin Dillard’s father, Thom Dillard, was running a dealership in Fayetteville in the late 1980s, Kristin decided to work at the store’s hot dog stand.

From that point on, Kristin said she was hooked.

“I started working when I was 16 here. And then worked in every chair all the way up,” Kristin said.

Now, 19 years later, her father has passed the keys for Team Auto — the dealership that he ran in Salisbury for 25 years — to her.

“I grew up here. My dad would sometimes pick us up from school and we’d come and hang out here after school was over,” Kristin said.

Kristin, 35, said that she worked for a car dealer in Maine for six months after she graduated college. But, since then, she said she’s been putting her heart and soul into Team Auto.

During the course of her 19 years working for Team Auto, Kristin saw her visions used in lots of different areas of the store.

One of those areas was the most recent remodeling of the store, which began in 2007 and finished last year. Kristin said that she did basically all of the coordination for the project, from choosing the floor tiles to hiring contractors.

Then, she said, there were the dozen or so jobs that she held on her way to becoming the store’s dealer.

She said that her favorite position along the way was finance, because it was the most time that she got to spend with customers.

“Because you’ve got to do their paperwork. You have that chance to make that lasting impression with the customer. And I always felt like that was rewarding,” she said.

Because Kristin grew up in the car business, she said she feels ready to take on the job of dealer, even though, as a woman under 40, she is a rarity in the industry.

Kristin is trying to keep the dealership’s family tradition alive by bringing her two daughters — Emory, 8, and Finley, 6, — on visits to the store.

“They fight over who’s going to be the next boss,” Kristin said, laughing.

But she said that, while she’d be thrilled to have them in the car industry, she’ll be happy with whatever they want to do.

“It’s up to them. They’re both really, really smart. So it just depends on what’s going to fuel that passion for them,” Kristin said.

With regard to other young women who might want to get into the car business — or any business, for that matter — Kristin has one main piece of advice.