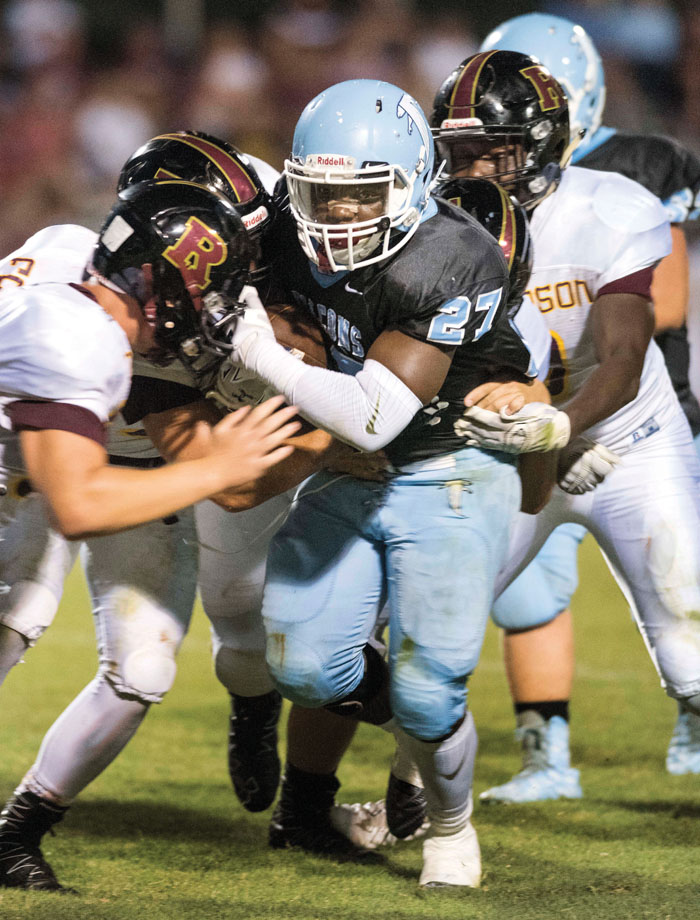 MOUNT ULLA —  West Rowan’s  2015 and 2016 seasons couldn’t have been any more similar — back-to-back 10-4 overall records, back-to-back 7-2 league marks, with both seasons halted in the third round of the 3A state playoffs.

The challenge for Joe Nixon in his third season as West’s coach will be to maintain a winning formula in a season of change. West moves on without two of the best players ever to wear the light blue — receiver Kortez Weeks,  who was a big-play machine, and linebacker Lawrence “L.J.” Robinson, who tackled about as many people as anyone in the country.

“We didn’t just lose a ton of guys, we lost two guys who were players of the year in the South Piedmont Conference,” Nixon said.

West has been good at football for a long time — the most recent losing season was in 1998 —  but the true glory days for the Falcons came when they were stationed in the NPC. Four straight trips to state title games and three state championships from 2008-10. Names like K.P. Parks, Chris Smith and Jon Crucitti still echo in the hallways and cornfields in Mount Ulla.

“It’s exciting for us to be back in the old NPC,” Nixon said. “The travel is better, the gates should be better, and it’s going to be good to see traditional rivals from Iredell County again.”

If the Falcons are going to stay in that 10-4 range, they have their work cut out against a bruising schedule. There’s little doubt that the non-conference gauntlet, which includes A.L. Brown, Concord, Davie County, Mooresville and North Rowan, will be even more demanding than the NPC part of the slate.

While the schools are just 17 miles apart through the Rowan countryside, West hasn’t encountered A.L. Brown on a football field since the Wonders smashed a 13-0 West team in the third round of the 2005 3AA state playoffs. West will be taking on the Wonders (in Mount Ulla) and Concord (on the road) back-to-back in September.

“Well, you want to play good teams to prepare you for the conference and for the playoffs,” Nixon said. “We’ll find out quick who we are.”

Tough preparation already has started. West’s scrimmages were no pieces of cake. There was action against Hickory Ridge, now 4A, on Friday. Prior to that, the Falcons took part in a high-powered scrimmage that included Charlotte Catholic, expected to be a bully in 3A, and strong 4As Hough and West Forsyth.

“We’ve seen a lot of top-10 teams in the scrimmages,” Nixon said. “But no coach goes into a scrimmage worrying about winning or losing. We did some good things, but we also saw we’ve got a lot of things to work on. The biggest thing is we’ve got film now to show our kids. They’re going to learn from it.”

Nixon has about 100 Falcons in uniform, with 54 players expected to be on the varsity squad.

A stable coaching staff has been one of West’s strengths over the years. Hall of Famer Ralph Ellis seems to have been around since the school opened, and he’s back for more.

West’s defense returns three anchors. Devin Turner, a powerful, 290-pound lineman, could be the county’s dominant defender. Brandon Wallace, the drop end in West’ scheme, doesn’t have size, but he gets people on the ground. Only Robinson had more tackles than Wallace in 2016. Free safety Malcolm Ingram has intercepted 10 passes during the last two seasons and could lead the county in picks.

Offensively, Payne Stolsworth threw for 2,034 yards and 25 TDs as a sophomore. Weeks was incredible and helped pump up those numbers, but Stolsworth still enters this season as the county’s top QB. Martavio Rankin has never been West’s feature running back, but he’s quietly powered for 900 career yards in supporting roles.

West’s return game and backfield have been bolstered by North Rowan transfers Jayden Jones and Jaden Perry. Both are home-run threats, as is  young receiver Jalen Houston, a rocket who was one of the county’s dominant track athletes (sprints/hurdles) as a freshman.

“When we look out there, we don’t see a lot of returning starters,” Nixon said. “But we’ve got another great group of kids. I like their effort and I like the way they come to work every day.”