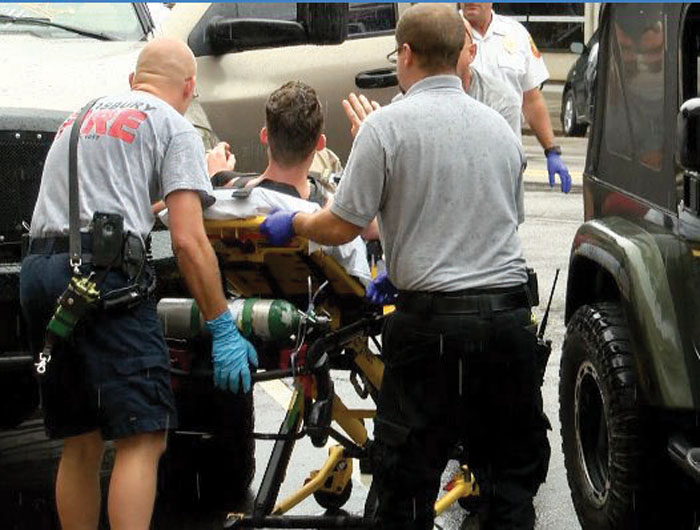 Fire, police and other emergency responders work to revive a couple believed to have overdosed and passed out in downtown Salisbury recently. A 5-year-old boy was in their pickup parked in front a downtown business. Photo courtesy of WBTV

SALISBURY — Downtown Salisbury was a flurry of medics, firefighters and police officers who responded Friday to the apparent overdoses of a couple who were found passed out on the sidewalk in the 100 block of North Main Street.

The pair, who reportedly had a 5-year-old boy in their pickup, were found with drug paraphernalia in the truck. Medics administered Narcan, a prescription medicine used to temporarily counteract the effects of an opioid overdose.

More than 52,000 Americans died of a drug overdose in 2015, the majority caused by opioids, according to the U.S. Centers for Disease Control and Prevention.

Drug overdose death rates have continued to rise across the nation, and local authorities say Rowan County is no different.

This week alone, emergency workers have responded to 11 overdoses in the city, three of which were fatal. Police officials say they continue to investigate a Thursday incident at the Economy Inn motel in which a woman was found inside a room with two children, one of whom has special needs.

It’s believed the woman died from a drug overdose, but police investigators say they are looking into the matter further. Drug paraphernalia was found in the motel room, a detective confirmed. The Rowan County Department of Social Services was called to the scene, and the children were placed with a grandmother.

The Spencer Police Department reported a fatal overdose Thursday. A man with a history of drug use was found dead when authorities arrived. Police Chief Michael James said officers had been called to the property before. The man was living in a tent between Seventh Street and South Whitehead Avenue with the permission of the property owner.

The man’s companion tried to call 911, but she wasn’t able to get a cellphone reception, so she left the area to get help, James said.

Officers found her walking, and she told them she became lost and couldn’t find where they were staying.

“We suspect an overdose, but we won’t know what happened until we get an autopsy,” he said.

James estimates that police had been called to revive the man at least three times after an opioid emergency.

James said Spencer may not have as high a number of drug overdoses as neighboring towns, but “it seems to be a growing problem.”

He said within the past year, one person was found unconscious at Food Lion in Spencer. Medics with the Spencer Fire Department revived the woman with Narcan, and when she came to she told authorities a friend was inside her car.

When police and medics went to the car, the second woman also was unconscious. James said the woman was blue by the time responders reached her.

“People have no fear because they think EMS and the fire department are going to get there in time to save them, and that doesn’t always happen,” James said.

He said it will be up to the General Assembly to put some teeth in the law as to what authorities can do.

The Good Samaritan or 911 drug immunity law is one that provides immunity from arrest, charge or prosecution for certain controlled-substance offenses when a person is experiencing an opiate-related overdose.

The law also protects a person observing who calls 911 for assistance or seeks medical attention for a person who has an opiate-related overdose.

Landis Police Chief Kenny Isenhour said although his town has not had any recent overdoses, there was one a few weeks ago at a private residence. He said opioid overdoses are a problem that many local law enforcement agencies are having.

“Every part of the county has it. It’s everybody’s problem,” he said.

Police Chief Sharon Hovis said East Spencer is not immune to the drug overdose epidemic. She said the town has had two overdose incidents in recent weeks in which the people survived.

Both incidents involved the drug fentanyl, and both victims had to be revived with Narcan by rescuers.

Investigators are finding drugs like heroin laced with the potent drug fentanyl. Fentanyl is a synthetic opioid that mimics the effects of morphine but is 50 to 100 times more potent than morphine.

The Rowan County Health Department has planned a forum for later this month on the overdose epidemic in the county.