Local eclipse watchers will be out in force 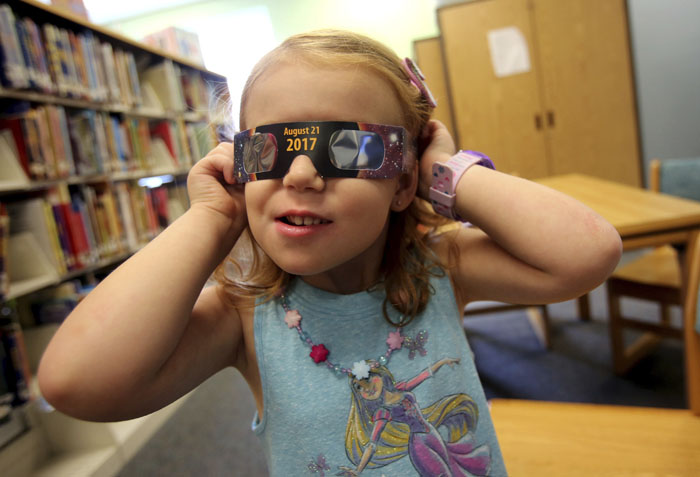 Emmalyn Johnson, 3, tries on her free pair of eclipse glasses at Mauney Memorial Library in Kings Mountain, N.C. Glasses are being given away at the library for free while supplies last ahead of the big event on Aug. 21. Brittany Randolph/The Star via AP

SALISBURY — People from across the country are expected to flock to a thin band crossing the U.S. on Monday, Aug. 21, to witness a rare solar eclipse. It will be the first time the U.S. has seen a cross-country eclipse since 1918.

Strips and corners of 14 states will have the chance to see a total solar eclipse — when the moon completely blocks the light of the sun and casts a shadow on Earth. Lucky viewing states include Oregon, Idaho, Wyoming, Nebraska, Kansas, Missouri, Illinois, Kentucky, Tennessee, Georgia, North Carolina and South Carolina.

Salisbury will not see totality like Murphy or Columbia, South Carolina, will, but the view should still be a good one. Local residents will get a chance to see a partial solar eclipse, just a few degrees shy of totality.

Special “eclipse glasses” are necessary when viewing an eclipse to avoid vision damage if looking directly at the sun. Eclipse glasses at viewing parties are available on a first-come, first-served basis. Local retailers such as Walmart and Lowe’s have reported that the glasses are sold out. An associate at Lowe’s said stocks will not be replenished. Walmart sai another shipment is expected, but it could not say when it would arrive.

Several viewing events are planned around Rowan County and the Piedmont for those who might be reluctant to fight eclipse traffic.

• Horizons Unlimited: An eclipse information session will be held from 7 to 8 p.m. Wednesday. The first 100 attendees will receive eclipse glasses.

• Rowan-Cabarrus Community College: A seminar on the eclipse is planned at noon Tuesday on the school’s south campus. The speaker will be Jack Howard, a former RCCC professor and current NASA Solar System ambassador.

On Aug. 21, the college will host an eclipse viewing party at the north campus fire and emergency training grounds. There will be a balloon release at 10:30 a.m. and the viewing will begin about 2:30 p.m. The event will feature music and food.

• Rowan Public Library: An eclipse story time and viewing is set for 10: 30 a.m. Aug. 21 at the Salisbury, East Rowan and South Rowan branches. Eclipse viewing will begin at each branch about 1:13 p.m.

The libraries received 3,200 free pairs of safety glasses through grant funding and participation in the Carolinas Solar Eclipse Party, hosted by the University of North Carolina Morehead Planetarium and Science Center. Participants at the watch parties will receive a free pair of safety glasses, while supplies last, along with demonstrations led by trained staff members.

• Daniel Stowe Botanical Garden, Belmont: A viewing party is set 1-4 p.m. Aug. 21. The eclipse begins about 1:11 p.m. in Gaston County, and maximum coverage will be about 2:40 p.m. A limited supply of eclipse glasses will be available to borrow or can be purchased from the garden store. The viewing party will feature crafts for kids including a do-it-yourself pinhole viewer, sundial and Earth, sun and moon model. Sproutycakes Bakery will sell themed desserts, and an eclipse-themed cocktail will also be available for purchase among other snacks and beverages.