Kisner sets a daunting target at the PGA 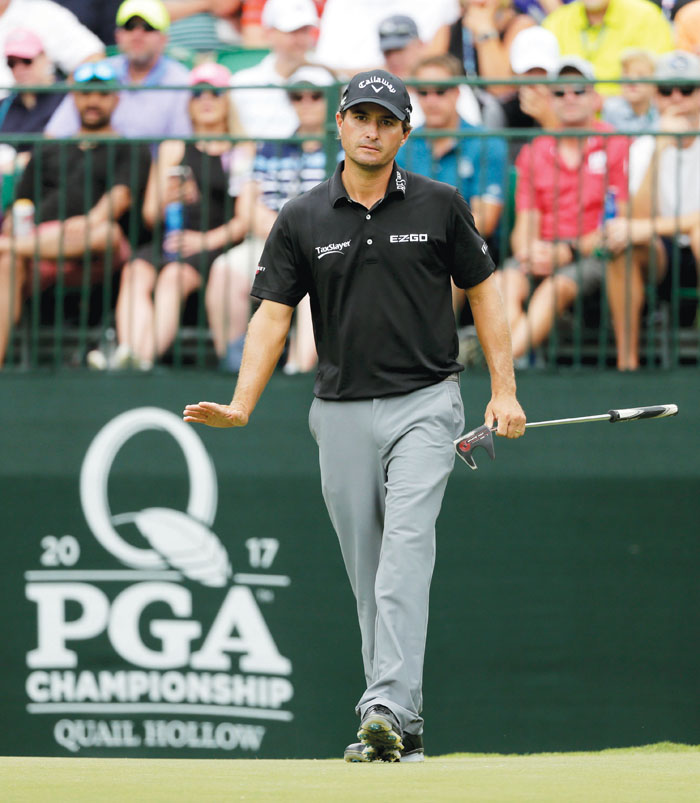 Kevin Kisner reacts after his putt on the ninth green during the second round of the PGA Championship golf tournament at the Quail Hollow Club Friday, Aug. 11, 2017, in Charlotte, N.C. (AP Photo/Chuck Burton)

CHARLOTTE (AP) — In the dozen times Kevin Kisner has played in majors, he has learned they are not much fun unless he’s playing well.

He’s having a blast so far in the PGA Championship.

Sticking to a simple plan on a challenging course at Quail Hollow, Kisner holed a 50-foot eagle putt from off the green that carried him to another 4-under 67. That gave him a five-shot lead among those who played in the Friday morning side of the draw.

Kisner was at 8-under 134 as Jordan Spieth, Dustin Johnson and others headed out in the afternoon just as a light rain began to fall. That might be the worst thing that happened all day to Kisner. The notorious greens of Quail Hollow were slick as ever, keeping low scores at a minimum.

“These guys going out in the afternoon, they break 70 they’ve done a hell of a job,” Rory McIlroy said after he suffered another bad stretch and shot 72.

Kisner doesn’t have the length for this 7,600-yard course, but he has golf smarts, a reliable swing and a good putting stroke for the greens. He saw the changes to the course earlier this year on a soft, damp day and wondered how he would manage.

The plan was to make birdie on the par 5s and the two short par 4s, and play for par everywhere else.

Rickie Fowler tried to do his part. Playing conservative at times to be in the fairway, he avoided a big number early in his round when a 60-foot chip didn’t quite get up a ridge and rolled all the way back to his feet. He lagged the next shot up to 5 feet and escaped with bogey.

Fowler picked up two birdies and then had to settle for pars the rest of the way for a 70 that put him at 3-under 139. No one else was closer to Kisner among the early starters, particularly not Phil Mickelson. He finally made a birdie on his 31st hole of the tournament, but by then it was much too late. Mickelson shot 74 and missed the cut for the first time in the PGA Championship since 1992.

Ryan Fox of New Zealand posted the low round of the tournament at 66 to reach 1 under overall.

McIlroy, meanwhile, made an amazing escape of his own with a shot that bounced so far down a cart path on the par-5 10th that it was pin-high, 100 yards away. He bounced a 6-iron from 110 yards up the cart path, through the bunker and onto the fringe about 40 feet away, and got up-and-down for par.

That was the biggest excitement he had all day.

Still lurking in range, McIlroy fell apart early on the front nine with four bogeys in five holes and had to rally with birdie on the two easiest holes on that side.

“Obviously, Kiz is on fire right now,” McIlroy said. “But take him out of the equation, I feel like I’m still right there in the tournament.”

That’s a practical way of thinking whenever most anyone has a big lead, and the fact it’s Kisner adds to the intrigue. He is tough to beat when he’s hitting it where he’s aiming because of his short game and his fortitude. Traveling the mini-tours toughened him, and he has won twice on the PGA Tour.

But he didn’t play his first major until the 2014 U.S. Open at Pinehurst, and his finishes have largely been in the middle of the pack.

“I’ve been upset with how I’ve played in the majors so far in my career,” Kisner said. “I feel like I have the game to compete in majors, and tons of 30th to 40th, 50th-place finishes. That’s kind of been our goal for the year. We haven’t played well in them yet this year, but every year you learn more about the majors.”

“They are really hard,” he said. “And they are not a whole lot of fun unless everything is working out for you.”