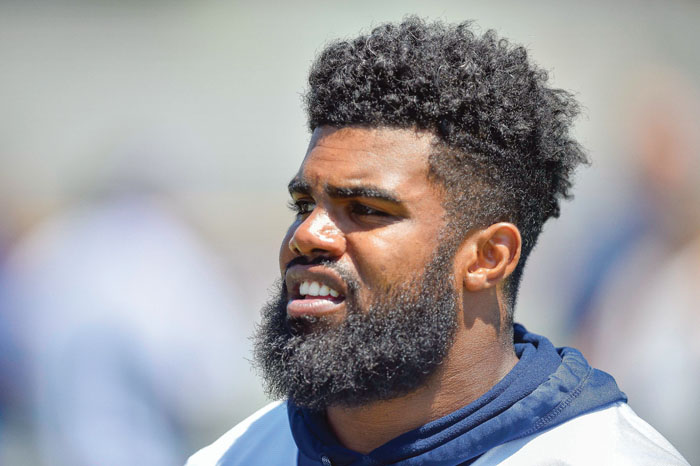 FILE - This is a July 25, 2017, file photo showing Dallas Cowboys running back Ezekiel Elliott during NFL football training camp in Oxnard, Calif. Elliott has been suspended for six games under the NFL’s personal conduct policy following the league’s yearlong investigation into the running back’s domestic violence case out of Ohio. The 2016 NFL rushing leader was suspended despite prosecutors in Columbus, Ohio, deciding more than a year ago not to pursue the case involving Elliott’s girlfriend at the time in the same city where Elliott starred for Ohio State. The league said Friday, Aug. 11, 2017, there was “substantial and persuasive evidence” that Elliott had physical confrontations last summer with his ex-girlfriend, Tiffany Thompson. (AP Photo/Gus Ruelas, File)

According to the letter Elliott received informing him of the suspension, the NFL believed he used “physical force” three times in a span of five days in a Columbus, Ohio, apartment last July resulting in injuries to Tiffany Thompson’s face, neck, shoulders, arms, hands, wrists, hips and knees. She was his girlfriend at the time.

Prosecutors in Columbus decided nearly a year ago not to pursue the case in the city where Elliott starred for Ohio State. In announcing the suspension under the NFL’s personal conduct policy, the league said its investigation was based on photographs, text messages and other electronic evidence. Commissioner Roger Goodell made his decision based on the findings and in consultation with four advisers, including Hall of Fame player Ken Houston.

Elliott posted a statement on his verified Twitter account Friday night, saying that he was “both surprised and disappointed” by the NFL’s decision and that he strongly disagrees with the league’s findings. He said he was “sincerely sorry” for the distraction and disruption that he has caused for the Cowboys and his family.

Elliott’s ban means the Cowboys will have four players suspended when last year’s NFC East champions start the season in a month — with the possibility of losing two more.

The 22-year-old Elliott has three days to appeal the ruling. While he made no direct reference to an appeal in his statement did, his legal team did in a separate statement.

“The NFL’s findings are replete with factual inaccuracies and erroneous conclusions and it ‘cherry picks’ so-called evidence to support its conclusion while ignoring other critical evidence,” attorneys Frank Salzano and Scott Rosenblum said in a joint statement.

The attorneys said “a slew of additional credible and controverting evidence will come to light” through the appeal.

If Goodell’s ruling stands, Elliott will go on the suspended list the first week of the regular season and be eligible to return to the active roster Oct. 23. His first possible game would be Week 8 at Washington.

The ruling requires Elliott to get an evaluation to determine whether he needs counseling or treatment, and to show proof that he is following up on any recommendations.

“I admit that I am far from perfect, but I plan to continue to work very hard, on and off the field, to mature and earn the great opportunity that I have been given,” Elliott said in his statement.

Peter Harvey, one of the advisers to Goodell, said the NFL had access to forensic electronic evidence that prosecutors didn’t have, including proof that photographs were taken by Thompson the same day she alleged that she was injured by Elliott.

Harvey also said some of the explanations offered by Elliott’s representatives, including that Thompson was injured in a fight with a woman or by falling down stairs, weren’t supported by evidence.

Despite some conflicting testimonial evidence, the letter said that “there is no dispute that you and Ms. Thompson were together in the same location on the dates identified, and no evidence to suggest that anyone else could have caused these injuries.”

Cowboys owner Jerry Jones had maintained he hadn’t seen anything to indicate Elliott was guilty of domestic violence and he didn’t think his star back would be suspended. Jones made the comments several times, including during festivities last weekend when he was inducted into the Pro Football Hall of Fame.

The ruling potentially could put Goodell and Jones, a strong supporter of the commissioner, at odds the same way Goodell clashed with New England owner Robert Kraft over last year’s four-game suspension for quarterback Tom Brady over the “Deflategate” controversy.

The NFL revised its personal conduct policy in 2014 following sharp criticism of a case involving former Baltimore running back Ray Rice. The policy gave Goodell authority to suspend players for at least six games in domestic cases, with or without a conviction.

Elliott has had a string of off-field issues since the Cowboys made him the fourth overall pick in the 2016 draft. He was seen in a legal marijuana shop during the preseason in Seattle last year and was also involved in a bar fight in Dallas a week before training camp this year.

The NFL’s letter to Elliott cited the Ohio case as well as an incident this past spring when Elliott was caught on video pulling down a woman’s shirt while watching a St. Patrick’s Day parade in Dallas.  While not part of the decision on discipline, the league said that “inappropriate and disturbing” behavior reflected poorly on Elliott.

“When viewed together with the July incidents, it suggests a pattern of poor judgment and behavior for which effective intervention is necessary for your personal and professional welfare,” NFL special counsel for conduct Todd Jones wrote.

An All-Pro as a rookie, Elliott finished with 1,631 yards rushing in helping the Cowboys to the best record in the NFC at 13-3 before a divisional playoff loss to Green Bay. He set rookie franchise records for yards, rushing touchdowns (15) and total touchdowns (16).

Two more defensive players could face suspensions. Linebacker Damien Wilson faces aggravated assault charges in the Dallas suburb of Frisco over a dispute involving a parking space, and cornerback Nolan Carroll was arrested on a drunken-driving charge in Dallas.

IRVINE, Calif. (AP) — If the Los Angeles Rams needed someone to vouch for wide receiver Sammy Watkins before acquiring him in a trade from the Buffalo Bills on Friday, they didn’t have to go very far.

Wide receiver Robert Woods and cornerback Nickell Robey-Coleman, who both played in Buffalo for the past four seasons before signing with Los Angeles as free agents, expect the former No. 4 overall draft pick to provide a major jolt of energy to the Rams’ passing offense.

Woods said Watkins is “a big, big, big-time receiver,” while the gregarious Robey-Coleman sees him as the kind of difference-maker the Rams have lacked since the heyday of “The Greatest Show on Turf” when they were located in St. Louis.

Upgrading the options for quarterback Jared Goff has been a priority since losing all seven starts in his disastrous rookie season, and trading former starting cornerback E.J. Gaines and a second-round pick in the 2018 draft is the boldest commitment yet to that aim.

If Watkins can live up to Robey-Coleman’s assessment, it becomes a worthwhile transaction, even if it also means using the franchise tag to keep him or signing him to a lucrative long-term deal as his contract expires at the end of this season.

Watkins showed hints of that potential in Buffalo. He finished just 18 yards receiving shy of the 1,000-yard mark as a rookie, then followed it up with 1,047 yards and nine touchdowns in his second season despite missing three games due to injury.

Even as he missed eight games last season because of a foot injury that ultimately required surgery, Watkins still averaged 15.4 yards per reception, a threshold no Rams receiver reached in 2016.

Simply having Watkins on the field should make the game easier for Goff and the other receivers. Woods has first-hand experience in benefiting from the one-on-one coverage Watkins can create, and coach Sean McVay showed in Washington with DeSean Jackson that he can take advantage of a deep threat.

“I think his vertical presence and even just his threat and his name will allow defenses to play us different because you always have to have someone over the top of him,” Woods said.

“You see in McVay’s offense how he is always spreading the ball around, multiple receivers with 1,000 yards, and I think that’s the same thing that helps us. We all lose targets, but I think the main goal is to win games and be productive, and I think that will help us as an offense.”

Bringing in Watkins also gives Goff another experienced receiver to go with Woods and Tavon Austin, who has been limited in training camp with a hamstring injury.

Add in rookies Cooper Kupp and Gerald Everett, an athletic tight end drafted in the second round, and that should be enough of an improved supporting cast to judge what kind of strides Goff has made.

Watkins is expected to arrive in Los Angeles on Saturday after catching four passes for 39 yards in the Bills’ preseason opener Thursday. The Rams host the Dallas Cowboys on Saturday to begin their exhibition schedule.

“I don’t even know if you can play in two games in one week, but he did a nice job last night,” McVay said.

“We’ll get him going right away, start getting him acclimated to our verbiage and our system, and looking forward to being able to get to know him a little bit better and see how he is able to absorb the material. He is certainly going to be a good addition for our offense and I think the guys are excited about it.”

Woods was shocked by the trade, with McVay informing the Rams receivers shortly before it was announced.

“Still didn’t believe him,” Woods said, “but it’s like a crazy, crazy deal.”

Kisner sets a daunting target at the PGA