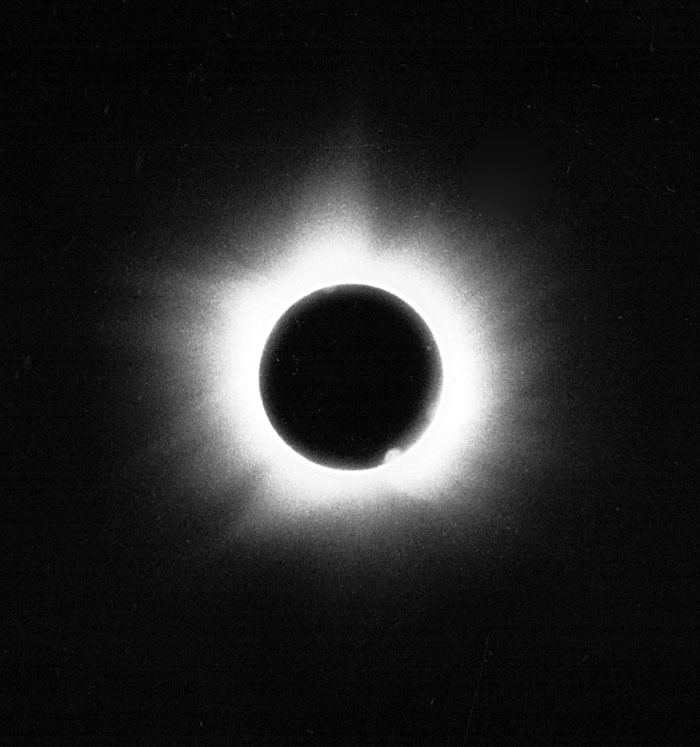 Nicknamed "The Eclipse of the Century" by the media on March 7, 1970. The photo was made with a 300mm lens on black and white Tri-X film in Cheaspeake, Va near Norfolk and Virginia Beach. photo by Wayne Hinshaw

The “Great American Total Solar Eclipse” is coming Aug. 21. That is a little over a week away, for those of you who are slow getting your Christmas shopping completed on time and are preparing for one of the great solar experiences of our lifetime.

I’m no expert on solar eclipses, but I did live through what was called the “Eclipse of the Century” on March 7, 1970. It is one of those
events that you will remember for a lifetime, so be prepared to enjoy the coming eclipse.

At the time, living in Chesapeake, Virginia, next to Norfolk and Virginia Beach, I found I was living in the direct path of the total eclipse that traveled up the East Coast.

At the time, I was a photographer for a school picture company photographing schoolchildren and publishing school yearbooks. On March 7 that year, I set my camera up on a tripod with a 300mm lens and loaded with black and white film on the porch of our apartment building.

An eclipse was described by CBS News announcer Charles Kuralt “as a time when the shadow of the moon races across the U.S.” It is the time when the moon passes between the earth and the sun casting a complete shadow in some areas. The path of the 1970 total eclipse skimmed the U.S. coast from Florida, Georgia, South Carolina, North Carolina and Virginia to Nantucket. The path was about 100 miles wide, so if you were not in the path you could experience the eclipse but not in its total darkness.

On this memorable day, millions flowed to the beaches to observe this eerie phenomenon, much like a holiday spirit of excitement. At my apartment complex, residents emptied into the parking lot between the buildings about 1 p.m. in total bright sunlight. Little by little, everything darkened. It was an odd darkness, not like the darkness at dawn or sundown. It was a time of awesome curiousness since most had never seen anything like it before.

In a half hour or so, maybe longer, the sky became very dark very fast, much like a giant thunderstorm consuming the sky. Everything became dark, like a night when there is a full moon.

Though it was dark, you could see. Looking at the sun, the moon had moved between the earth and the sun, blocking most of the sunlight. There was only a ring of sunlight around the black shadow of the moon.

During the darkness, the temperature of the air in the parking lot dropped rapidly as the heat from the sun was blocked. It was impressive, like something had put a dimmer switch on the sun. A glimmer of speeding darkness covered us like a surprise blanket tossed over our heads. It was a great experience, and it was gone.

Again quoting Charles Kuralt: “The shadow will move like a giant crayon mark over the earth.” CBS News covered the eclipse live as the streak of darkness moved from Florida to Nantucket. It was the first live TV coverage of an eclipse. Some areas along the path of the eclipse had clouds, and those folks could not see the eclipse except for the darkness that swept over them.

I heard roosters crowing thinking it was morning again as the daylight reappeared. As I stood observing, I noticed that pet dogs and cats standing with their masters were inching closer for protection from this strange occurrence.

There was a news report from Valdosta State College in Georgia that 600 students had gathered with their cameras and blankets to watch the eclipses. Clouds set in, and they didn’t get to see anything. The news announcer said the crowd of 600 was like “a crowd at a football game that gathered for the game and the football team didn’t show up.”

Here in Salisbury, Catawba College is planning an eclipse viewing party for students, while many from Rowan County will be traveling to South Carolina or Asheville so they will be in the path of the total eclipse. Rowan County viewers will see only a 90 to 95 percent eclipse, but it will still be a lifetime memory to experience.

The old “Mary Tyler Moore Show” had an episode at the time in 1970 in which Howard, the less than smart news anchor, took photos of the eclipse on film that he had pre-exposed to sunlight, so it ruined his photos. He commented that “the next total eclipse over Minneapolis will not occur until Sept. 14, 2099.” That is a funny line in the comedy show, but there is much truth about when you will get another chance to see an eclipse.

The next eclipse over the U.S. will be in April 2024, and it might not be over Rowan County. One expert said, “You have to go visit an eclipse; they don’t come to you.”

So get prepared for the local partial eclipse on Aug. 21 in the afternoon, and don’t miss the show of a lifetime. You will need special solar filters for your eyes and cameras. Don’t look directly at the bright sun; it will damage your eyes or it could blind you. So prepare to be safe with the proper equipment for the show.