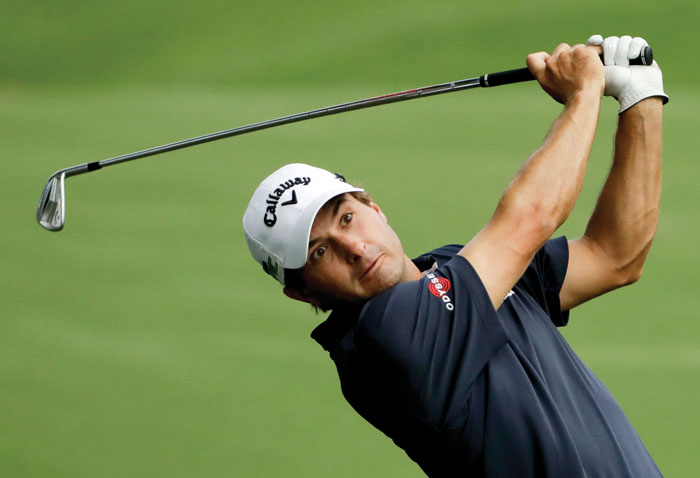 Kevin Kisner hits from the fairway on the 18th hole during the first round of the PGA Championship golf tournament at the Quail Hollow Club Thursday, Aug. 10, 2017, in Charlotte, N.C. (AP Photo/Chris O'Meara)

CHARLOTTE (AP) — Jordan Spieth began his quest for the career Grand Slam by not making a putt longer than 5 feet. What helped was that Quail Hollow punished just about everyone at some point Thursday in the PGA Championship.

Kevin Kisner and Thorbjorn Olesen of Denmark emerged as the top survivors on a course with some of the fastest, scariest putting surfaces the PGA Championship has ever seen. And both had to watch lengthy birdie putts creep into the cup on the 18th hole to share the lead at 4-under 67.

For all the talk about this 7,600-yard course favoring the big hitters, the shortest club in the bag turned out to be just as valuable.

“Any time you have a putt down grain, downhill … we just tap it and hope it stops by the hole,” Jon Rahm said after a 70.

Spieth is among the best putters in golf, especially from long range. On consecutive holes, he ran long putts some 10 feet by the cup and made bogey. He saved his round with two late birdies for a 1-over 72 and still was just five shots behind.

The 24-year-old Texan would become the sixth, and youngest, player to complete the Grand Slam if he were to win the PGA Championship.

U.S. Open champion Brooks Koepka led five players at 68. Koepka missed a half-dozen putts from 12 feet or closer, and while it looked as though he hit the ball well enough to go low at Quail Hollow, he wasn’t the least bit frustrated.

“It’s going to test your patience one way or another,” Koepka said. “That’s just a major. You’ve got to stay patient. You can’t make doubles out here. That’s the big thing. Make sure the worst score you make is a bogey and give yourself a couple of good chances on the easier holes.”

That’s the way Kisner approached it.

It helps that he grew up in the South and loves Bermuda greens. Given the size of Quail Hollow, Kisner drew up a simple plan. He identified four or five holes where he could make birdie, and he played for par everywhere else.

The 18th was not one of the birdie holes he had in mind, especially with his ball nestled in the Bermuda rough 205 yards from the pin. Kisner thought the grass was thin enough behind the ball to get a 5-iron on it, and from there it was a matter of judging how much it would bounce. It ran up to the green about 20 feet away, and he used that rhythmic putting stroke to trickle it into the cup.

Olesen picked up birdies on most of the same holes, and he finished with a 30-foot birdie that also sounded like an accident.

“It was a little bit of a safe shot into the green,” he said. “That’s what can happen on this golf course. When you play safe into the greens, you give yourself very tricky putts, like the one I had — downhill, left-to-right. It was very, very fast. But it was just a very good roll. So it was nice to see that one drop.”

Rickie Fowler made plenty of birdies, and he needed them to offset his triple bogey on the sixth hole.

Rory McIlroy, the betting favorite coming into the week because of his two victories at Quail Hollow, was motoring along just fine when he birdied the 10th hole to reach 2 under, just two shots behind. One swing changed everything. He hooked his tee shot into the water on the reachable par-4 14th, had to drop in nasty rough and missed a short putt to make double bogey. He failed to birdie the par-5 15th and closed with three pars for a 72.

Hideki Matsuyama, Dustin Johnson and Jason Day were among those at 1-under 70.

Quail Hollow played to an average score of 74.7, making the PGA Championship look like the toughest test of the year in the majors. The PGA Championship typically features good scoring because it’s held in August when water has to be kept on the greens to keep them from dying.

The club switched to Bermuda grass, and with the undulation on the greens, it became a beast to play. The 67s were the highest score to lead the opening round of the PGA Championship since Matt Kuchar shot 67 at Whistling Straits in 2010.

Spieth failed to take advantage, and while he could appreciate they were tough to putt, he had a good day off the tee. That was his main concern.

As for the pressure of trying to get the final leg of the Grand Slam?

“I don’t think I was as free rolling as I thought I would be, as you can tell by some frustration,” he said. “If I would have shot 1 over and didn’t strike it well and everything was average, it would have been fine. But when I had the chances that I had and I just couldn’t get the ball to go in on the greens, that is when I get the most frustrated I can get out there.”

At least he was still in the game.

Phil Mickelson failed to make a single birdie — the second straight major that has happened — and shot a 79, his worst score ever in the PGA Championship. Ernie Els, who might be playing his final PGA, matched his worst score in the championship with an 80. He also shot 80 when he was 22 playing his first one at Bellerive in 1992.