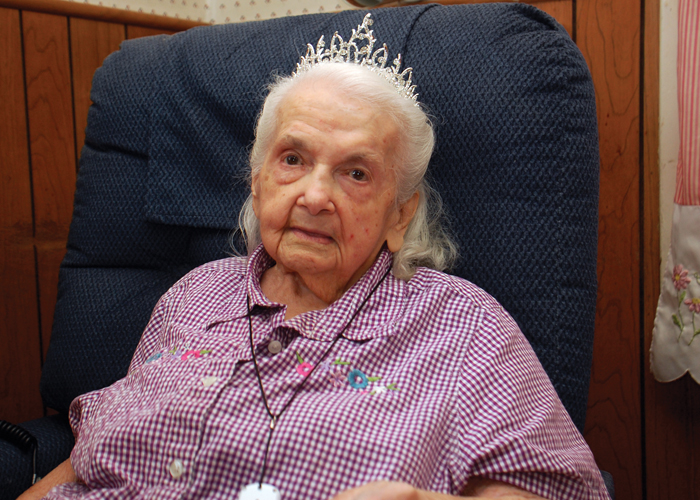 Wearing a tiara in advance of a birthday party Saturday at the VFW, Gerri Butler will be 100 years old Aug. 16.

SALISBURY — Gerri Robbins Butler, who will always be a girl from Big Sky country, attended the University of Montana in Missoula on an academic scholarship in the 1930s.

She majored in journalism, and two years into her schooling, the dean of the journalism school called all the women students together for a meeting and essentially told them there was no future for women in the profession.

After this declaration, he asked six of the women to stay behind, and he hinted that if any of them could make it with newspapers, maybe the half dozen in the room could. Still, he was skeptical.

He looked directly at Gerri and said, “Miss Robbins, why don’t you marry that boy you’re in love with?”

Some eight decades later, Gerri looks up from her recliner and says, “So I did.”

She left school and married Roscoe Butler, a boy from North Charleston, South Carolina, who had joined the Army during the Depression because he couldn’t find a job. The Army stationed him at Fort Missoula, and at a Saturday night dance in town, he met Gerri Robbins for the first time.

Early on, Roscoe protested he wasn’t much for dancing. Gerri set him straight quickly.

Roscoe became quite proficient, and Cooki Perkins, the youngest of Roscoe and Gerri’s five children, still remembers how the couple often would put big-band albums on the stereo and dance in the living room.

“My husband and I used to dance a lot,” Gerri says.

It’s hard to believe, but Roscoe died 37 years ago, and Gerri is approaching a milestone — her 100th birthday next Wednesday. To celebrate, her family has rented out the VFW on Brenner Avenue, and they are having a catered, drop-in party for Gerri from 6 to 10 Saturday evening.

Gerri probably will be wearing a tiara for the party, which also will allow her to meet a great-great-grandchild for the first time.

Gerri lives in the North Jackson Street home the Butler family moved into in 1968. Granddaughter Anna Pozyck and a big, friendly dog named Zeppelin live with her. Zeppelin is a bed-hopper at night and usually spends some time snuggling up with Gerri.

Sarah Day stops in daily as a caregiver for Gerri, who remains as active as possible. She makes it a point to walk inside the house daily and does exercises from her favorite chair. She needs only glasses for reading, and her hearing is terrific.

Into her 90s, Gerri was still driving, but she allowed her license to expire on her 95th birthday. She credits good genes for living this long. The women on the side of her French-Canadian mother had long lives — and maybe they had another secret.

“Killed off the men, I guess,” Gerri says.

Cooki says her mom has always possessed “a sharp sense of humor.”

“She’s probably one of the most independent people you’ll ever meet,” Cooki says.

“Independence is a big thing with her,” Day confirms.

Gerri was an avid bridge player — she belonged to three different bridge clubs — and Cooki says her mother still plays a mean game of cribbage.

In addition, Gerri’s active memberships in different organizations and work for Sacred Heart Catholic Church used to consume her. She dedicated hundreds of hours to groups such as the Catholic Daughters, the VFW Auxiliary, the Spencer and Salisbury Woman’s Clubs, and Meals on Wheels.

For a long time, Gerri was the nighttime person on call at the homeless shelter in case a volunteer fill-in was needed.

Friends and family also know how good a baker Gerri is. Her multigrain bread recipe is still used to teach 4-H students. Tea rings and yeast rolls were among her legendary baked goods.

The tea rings always set off a bidding war at Beta Sigma Phi Sorority auctions. “They were well-received,” Cooki says.

Looking back, Gerri says her own mother was talented in the kitchen, always baking twice a week and producing about five or six loaves of bread each time. Her father grew wheat on their Montana farm, and she remembers him taking wheat to the grist mill to be ground up into 100-pound bags of flour for all the baking.

Gerri loves a good steak, owing to those years growing up in Montana cattle country. Before Cooki was born, she was a meat cutter at a Winn-Dixie grocery store, so she knows her way around proteins.

Over the years, Gerri has traveled a lot, including trips to Europe and Thailand, where her son Roscoe Jr. lives. Even in her 70s, Butler was able to walk the steps of the Parthenon in Athens, Cooki says.

In 2011, she traveled back to Montana and a reunion of people who attended Sacred Heart Academy, a Catholic school. For all 12 years of school, Cooki says, Gerri was No. 1 in her class.

Day has heard many stories from Butler about her early years out west.

“She’s got me now where I can’t wait to visit Montana,” Day says.

Gerri Robbins Butler was the sixth of eight children in a blended family. Her mother’s first husband was killed in a railroad accident. She and her second husband — Gerri’s father — had five children, and he brought three children from a previous marriage into the family.

Gerri loved living in their ranch house in a lumber mill town not far from Missoula.

A grandfather once had a harness and saddle shop in Missoula. Her dad raised wheat and sugar beets. Their farm had eight milk cows, and her mother sold butter and eggs.

Gerri recalls churning butter with one hand and reading a book with the other.

Gerri was editor of the school newspaper at her all-Catholic girls high school. When she was dating Roscoe in Missoula, they went to dances and movies together, sledding, skiing and ice-skating, and there were hot springs around Missoula to swim in, as long as you pumped in some cold water.

“You could put an egg in one of those streams and it would boil,” Gerri says.

The Army fort in Missoula was left over from the Indian wars. Gerri and Roscoe dated about a year before they married, and it took two years of marriage before they started having children.

After his stint in the Army, Roscoe and Gerri continued living in Montana. Roscoe took a job with the Northern Pacific Railroad. During World War II, he enlisted as a Navy Seabee and served in the Pacific.

The Butlers’ move away from Montana came when Roscoe’s brother in Lynchburg, Virginia, persuaded him to join his firm and sell insurance. Was Gerri upset about the move across country?

“I think I thought it was kind of an adventure,” she says.

But Roscoe wanted to get back with the railroad.

“He told me railroading gets in your blood, and he did not like selling insurance with his brother,” Gerri says.

Roscoe went to work for Southern Railway and made railroading his career until retiring in 1976. He was a car inspector and retired as supervisor of car inspection in the Spencer Yard.

Roscoe had been transferred from Lynchburg to Charlotte, then moved to Rowan County in 1961. The Butlers lived in Dukeville and on Sowers Ferry Road until buying their North Jackson Street house in 1968.

The Butlers’ five children were separated by 15 years, from Roscoe Jr. to Cooki. That meant Gerri was in school PTA for 30 straight years. She and Roscoe also became active in Cub Scouts at Calvary Lutheran Church in Spencer, even after son Robin aged out.

“I think they helped shape the lives of a lot of young men,” Cooki says.

The couple ended up with 14 grandchildren.

Not much more has to be done before Saturday night’s party for Gerri, who plans to go to the hair salon as one last piece of preparation.

A funny thing has happened recently with Gerri’s snow-white hair. Day, Perkins and Gerri have all noticed it. Strands of her hair are turning black, as if she were getting younger.

Night skies full of stars will do that for you.