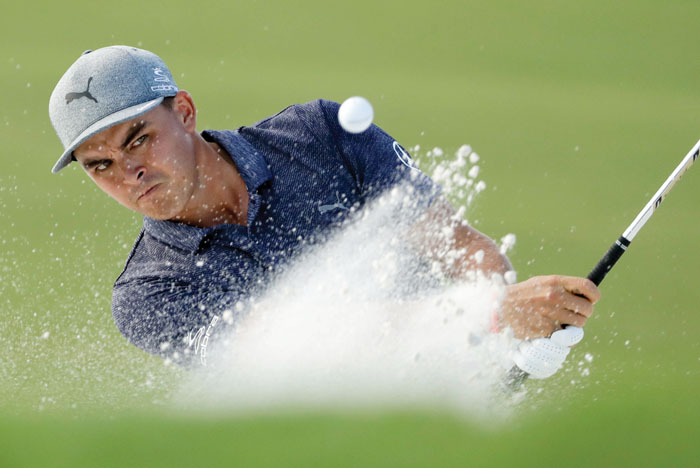 Rickie Fowler hits from the bunker on the 16th hole during the first round of the PGA Championship golf tournament at the Quail Hollow Club Thursday, Aug. 10, 2017, in Charlotte, N.C. (AP Photo/Chris O'Meara)

You can’t particularly blame him.

This is where Fowler got his breakthrough PGA Tour win — and where he now hopes to capture that elusive first major championship.

Fowler shot an opening-round 69 at the PGA Championship on Thursday, leaving him two shots behind co-leaders Kevin Kisner and Thorbjorn Olesen. He won the 2012 Wells Fargo Championship at Quail Hollow — his first win after turning pro two years earlier.

“I’ve definitely had a lot of good finishes here,” said the 28-year-old Fowler said. “Getting my first win, and then being in contention a couple years ago. This golf course has a great look to me. It suits my eye. I’ve made a lot of putts here.”

Fowler could have threatened for the lead had it not been for an ugly triple bogey at the par-4 fifth.

Fowler’s tee shot landed in the bunker on the right side of the fairway after what he called a “mental mistake” on his drive.

It was disaster from there.

He took two shots to get out of the sand and two more to find the green from the primary rough before two-putting for a 7.

It easily could have been a huge negative momentum swing for Fowler, who had birdied the previous two holes. Instead, he quickly regained his focus and birdied three of the next five holes to get back under par.

He finished with six birdies in all.

On a day when Phil Mickelson failed to make a birdie and shot 79 and defending champion Jimmy Walker finished with an 81, Fowler will take it.

“I made a lot of really good swings,” Fowler said. “I just have to put that (one hole) behind me and move on.”

Fowler was pleased with his overall play, particularly his driving — even though he only hit half of the 14 fairways.

“You have to drive it in the fairway — that’s definitely key,” Fowler said. “I feel like I did a pretty good job of that, other than one hole.”

The 5-foot-9, 150-pound Fowler won the Honda Classic in February and has six top-five finishes this season.

He’s hoping his consistent play can lead to that elusive first major championship.

“It’s been a good year kind of all across the board,” Fowler said. “Kind of going through and keeping an eye on stats and making sure that everything is continuing to get better or kind of figuring out what needs to be tightened up. I just need to continue to do what we’ve been doing.”

Fowler was paired with Rory McIlroy and Jon Rahm, two players he enjoys playing with. Rahm shot 70, and McIlroy — a two-time winner at Quail Hollow who lost to Fowler in a playoff there in 2012 — had a 72.

“It’s a great pairing,” Fowler said. “I’ve gotten paired with Jon a few times, and Rory and I have played quite a bit of golf together over the years. So I was looking forward to getting out with those guys. Yeah, hopefully we can push each other a little bit (Friday) morning and get moving in the right direction.”