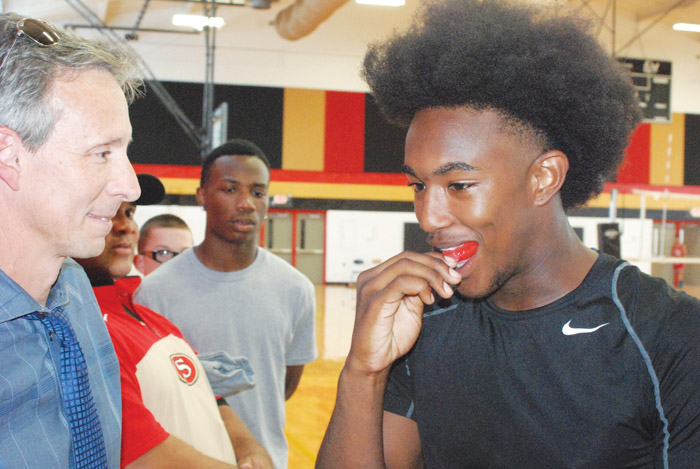 SALISBURY — Salisbury High’s football team was custom-fitted for mouthguards last Saturday, due to the generosity of a dental company  and two local dentists.

Dr. Robert Ogden and Dr. Bret Busby volunteered their time, along with some of their staff, and with supplies donated by Patterson Dental Company, organized a clinic for the Hornets’ football team.

Also key in the effort was Katelyn Storey, a Salisbury graduate and hopeful future dental student.

Storey, a former tennis and cross country star for the Hornets, graduated in May from UNC Chapel Hill with distinction and with two degrees — business and biology — and a minor in chemistry. She’s now working at the Community Care Clinic while she applies for graduate schools. If dental school works out, that’s the plan. If not, Storey will likely pursue a master’s degree in public health.

Ogden is a family friend and he and Katelyn actually started talking about the mouthguard project one day at a tennis match.

The custom-fit mouthguards can cost as much as $200 to $400. The fittings were done last Saturday morning at the Salisbury gym and the guards were made back at the dental offices by Dr. Ogden and Storey. The finished products were delivered to the team on Thursday.

For new Salisbury coach Brian Hinson, the hope is that the custom-fit mouthguards, which are made with the impression of each players’ bite, will reduce concussions. According to ScienceDaily.com, “high school football players wearing store-bought, over-the-counter mouthguards were more than twice as likely to suffer mild traumatic brain injuries or concussions, than those wearing custom-made, properly fitted mouthguards.”

“I’m just relieved that we’ve completed the project and I think a lot of the players are excited about it,” said Storey. “I had a lot of friends in high school that played football and had concussions. Even one, during his freshman year, had several concussions and couldn’t play anymore.

“I know that some of the players couldn’t afford this and might not want to spend money on it,” continued Storey. “I wanted to give back and I’m really into dentistry and want to go to dental school, so I thought, this a perfect way to get more involved.”

Hinson said he is appreciative of Storey’s efforts.

“For a young graduate like Katelyn to want to do something like this for her old school is a great thing,” said Hinson. “And the dentists who were involved, we appreciate their efforts as well.

“The kids are excited about it,” continued Hinson. “It’s an expensive piece of equipment, the kind you see Steph Curry wearing in NBA games — not just the old black, plastic ones that you form with a pot of hot water. They couldn’t wait to get them back.”

Ogden gave Storey all the credit. “It was Katelyn’s project,” he said. “She was looking for a good one to do for her former school, and she came up with this opportunity for the guys to have some mouthguards that are much more comfortable and may reduce he chance of injury. She made some phone calls and lined up some sponsorship and it became a great project.

“Hopefully, we can make this bigger in the next couple of years and maybe involve some other schools,” added Ogden. “We’ll see where it goes in the future.”

Storey is also thinking about doing it again.

“Maybe we can do it in future years, if we can find some grant money,” she added. “We were really lucky this year, with Patterson Dental donating all of the supplies.”