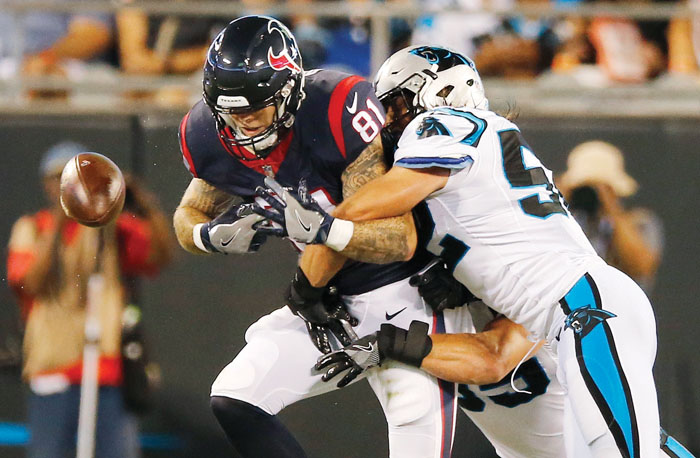 CHARLOTTE  (AP) — Deshaun Watson shined in his NFL preseason debut, completing 15 of 25 passes for 179 yards and running for a score in the Houston Texans’ 27-17 loss to the Carolina Panthers on Wednesday night.

Watson, who led Clemson to the ACC championship on this field last December en route to the national championship, received a rousing ovation from Tigers fans dressed in orange when he entered the game in the second quarter.

The cheers were even louder when Watson outran two defenders for a 15-yard touchdown — although Panthers fans tried to cover the celebration with boos.

Houston’s first-round draft pick looked comfortable in the pocket, stepping up to avoid pressure and getting rid of the football in a timely manner. He didn’t let penalties on his team affect him and didn’t turn the ball over in nearly three quarters of play.

Tom Savage went three-and-out on his first two possessions against Carolina’s first-team defense. Savage had better luck with Carolina’s starters out of the game, completing 8 of 8 passes for 67 yards on his final drive capped by a 16-yard TD run by Alfred Blue.

But it was a strong showing for Carolina’s defensive starters.

“We put ourselves in good third down situations and we were able to execute and get off the field,” Panthers linebacker Thomas Davis said. “Overall, the first half, the ones definitely had a good showing.”

Anderson completed 4 of 5 passes for 76 yards, including a 23-yard touchdown pass to Kelvin Benjamin to finish with a perfect 158.3 QB rating.

The 6-foot-5 Benjamin, who reported to training camp in good shape after being overweight in the spring, made a leaping grab in the corner of the end zone to give Carolina the early 7-0 lead.

“I am feeling good again,” Benjamin said. “I am ready to get Cam (Newton) back out there so we can rebuild that chemistry.”

J.J. Watt played one series for the Texans in his return from back surgery, which cost him 13 games last season. Kuechly returned after missing the final six games last season with his second career confirmed concussion.

Neither player registered a tackle.

SITTING OUT: Along with Newton, veteran defensive ends Julius Peppers and Charles Johnson, center Ryan Kalil and rookie wide receiver Curtis Samuel did not suit up for Carolina.

Panthers: Christian McCaffrey had 33 yards on seven carries in his rookie debut. McCaffrey showed impressive quickness and the ability to make defenders miss in his brief action.

When the conference title game resumes this season after a six-year hiatus, the Red River rivals could be facing each other for the second time that season. Or maybe it will be a rematch between the Sooners and Oklahoma State, though they wouldn’t play consecutive weeks since the regular Bedlam game is now set for the first Saturday of November and not at the end of the regular season.

The championship game is back in the Big 12, which was left out of the College Football Playoff in two of the first three years.

“We’ve been responsive to what we heard from the CFP,” Big 12 Commissioner Bob Bowlsby said, referring to that “13th data point” the title game creates for the league.

But the league didn’t return to divisions , which it had through 2010 when there were 12 teams. So the top two teams in the Big 12 standings will play again in the title game — a guaranteed rematch in the only power five league with a round-robin schedule. That could mean the first-ever December game between Oklahoma and Texas, both with new coaches and teams that haven’t faced each other twice in the same season since 1903.

Oklahoma, with Heisman Trophy finalist quarterback Baker Mayfield back for his senior season, will be going for its third consecutive Big 12 title — and 11th overall.

“I’ve always envisioned it being more like this. Of course, you get the pressure with it,” said 33-year-old Lincoln Riley, a first-time head coach after Bob Stoops’ surprising retirement in June. “If you don’t enjoy that sense of pressure and those expectations, then it’s probably not the place for you.”

New Longhorns coach Tom Herman, a graduate assistant at Texas for Mack Brown in 1999 and 2000, was 22-4 the last two years as Houston’s coach after being offensive coordinator for Ohio State’s national championship team three seasons ago.

Herman takes over a Texas team coming off three consecutive losing seasons for the first time since the 1930s.

“What’s the past is in the past,” Herman said. “Our job is to make sure that whatever happened doesn’t happen again.”

Oklahoma is a heavy favorite in the Big 12 as usual, even with the unexpected coaching change, the loss of another Heisman finalist (big-play receiver Dede Westbrook) and the early departures of two running backs (Samaje Perine and Joe Mixon) to the NFL. Mayfield is among nine returning offensive starters, and six of the top eight tacklers are back. The Sooners go into the season with a 10-game winning streak, the longest among FBS teams.

Mayfield. The former walk-on freshman starter at Texas Tech has passed for 7,665 yards and 76 TDs while leading the Sooners to the last two Big 12 titles.

Travin Howard and Ty Summers, two linebackers at TCU. Howard had a Big 12-high 130 tackles last season and Summers was second with 121.

Baylor coach Matt Rhule. After consecutive 10-win seasons at Temple, Rhule has likely the biggest challenge of the league’s three new coaches, taking over in the aftermath of Baylor’s sexual assault scandal. Rhule said his focus is on building a program, not a team, and building a culture, not an attitude.

Will Grier, West Virginia’s quarterback. Redshirted last season after transferring from Florida, where he threw for 1,204 yards in six games as a freshman in 2015.

ON THE HOT SEAT

Texas Tech scores plenty under fifth-year coach Kliff Kingsbury, averaging 38.8 points and 540 total yards a game. But the Red Raiders have allowed 39.6 points per game and gone 24-26 under their former quarterback. While going 5-7 last year, they scored 524 points — and gave up 522.