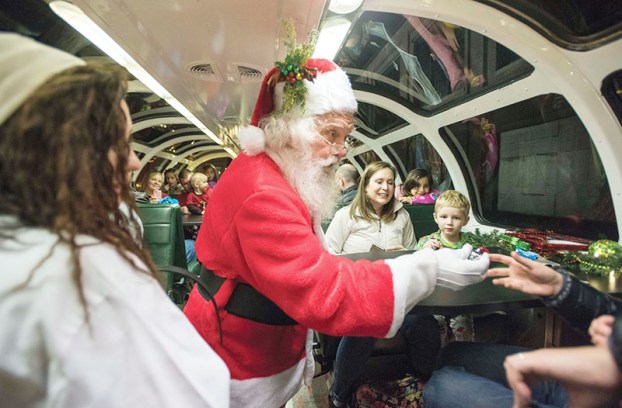 Santa Claus hands out the silver bells in one of the cars in the Polar Express as the popular attraction rolls back into town at the North Carolina Transportation museum in Spencer in 2016. JON C. LAKEY / SALISBURY POST

SALISBURY — When Rowan County hosted a regional tournament for the Little League World Series in July, the local economy saw a $675,000 boost, according to the Convention and Visitors Bureau.

The tournament had an attendance of 750 players, coaches, officials, family and fans. That resulted in 500 room nights for local hotels and a total economic impact of $675,000, Convention and Visitors Bureau CEO James Meacham said in a presentation to county commissioners Monday.

“It’s continued to be a great sports tourism event for us, not only with the local team participating but also bringing teams from all over the Southeast,” Meacham said.

That economic boost is part of a local tourism economy that is growing and expected to continue that trend, he said. From 2016 to 2017, lodging revenue increased by 11.2 percent.

Examples of the growing local tourism economy, Meacham said, include the Day Out With Thomas and Polar Express events at the N.C. Transportation Museum. Combined, both create 750 room nights for local hotels and have a collective economic impact of more than $4 million, he said.

“And we’re on record pace in terms of ticket sales, and we’re far ahead of where we were last year,” Meacham said. “Some of you may remember Polar Express had a record-breaking year last year.”

Last year, more than 30,000 tickets were sold for the Polar Express. The current rate of sales puts it on pace for 35,000 tickets sold, he said.

• The CVB supported 24 events that generated 2,700 room nights and created an economic impact of $8.1 million.

• More than 4,900 people entertained on the F&M Bank trolleys.

Each year, North Carolina releases statewide statistics for tourism revenue in individual counties. This year, Meacham said, the report will be released in the fall. The 2016 report showed Rowan County as one of the best in the state, and Meacham said the growth should continue with the 2017 report.

Future growth will particularly be focused in southern Rowan County, he said.

He also said the Convention and Visitors Bureau recently completed a marketing campaign that included ads being placed in 14 publications in the Southeast — mostly magazines.

Future projects for the Convention and Visitors Bureau include an arts and agriculture initiative that will include a “six-month-long festival experience”; a shuttle system that could help travelers move from lodging properties on a specific route to various attractions; a countywide way-finding system; and brand marketing campaigns.

SALISBURY — The Rowan County commissioners want to renovate an events space at West End Plaza but not if it... read more