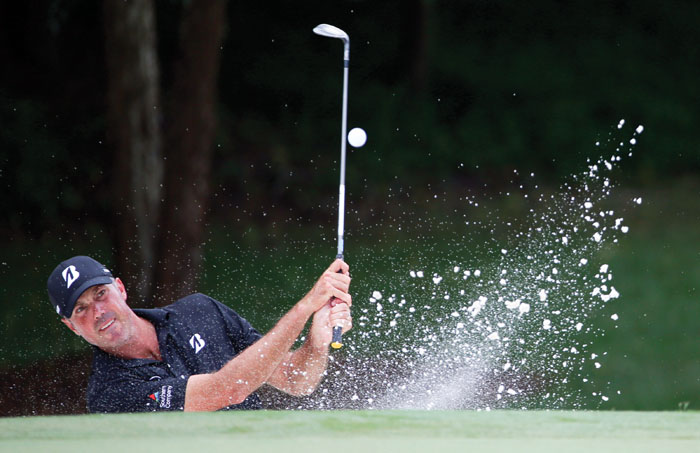 Matt Kuchar hits from the bunker on the 12th hole during a practice round at the PGA Championship golf tournament at the Quail Hollow Club Thursday, April 13, 2017, in Charlotte, N.C. (AP Photo/John Bazemore)

Arguably golf’s best player without a major championship title gets another chance to shed that distinction this week at the PGA Championship — three weeks after coming tantalizingly close at the British Open, overtaken by Jordan Spieth’s late surge.

“There’s not much you can do when Jordan finishes the way he did,” Kuchar said Wednesday. “You tip your hat to a guy who performs like that and say, ‘Well done.’ The thing is, there will be more chances, and I’ll certainly keep plugging along.”

Playing each of the last two tournaments helped. The relatively quick turnaround to the season’s final major helps even more.

“The great thing about the game of golf is, once you tee it up Thursday of the next week, nobody cares what you did the previous week — everybody starts from even par, and you have to go out and perform right then and there,” Kuchar said. “And I think that’s good therapy.”

He’s ready for the challenge that Quail Hollow poses — especially the demanding three-hole closing stretch known as the Green Mile.

“You better do everything well” this week, he said. “This course is going to punish bad shots, whether it comes with a driver, wedge, putt. This course tests everything.”

Kuchar, a 39-year-old former Georgia Tech player, ranks 13th on the PGA Tour’s career money list, with nearly $41 million in earnings — second only to Steve Stricker among players without a major win. He has finished in the top 10 in each of the four majors at least once, doing it nine times in all.

That first title was in his grasp at Royal Birkdale , where he went to the 14th tee during the final round with a one-stroke lead. He had two birdies and two pars over the next four holes and found himself two strokes back going to No. 18.

So it wasn’t so much that Kuchar lost the British Open — but that Speith went out and won it.

The experience could have crushed Kuchar.

Instead, it seems to have strengthened him.

He said his phone was flooded with supportive text messages and emails, and found it therapeutic to respond to each of them.

And during the Canadian Open the following week, he explained how tough it had been to see his young children — who “look up to you like you’re Superman” — in tears after the British Open because he so desperately wanted to be “the hero holding the trophy.”

The experience became a valuable teaching moment for the Kuchar family.

“I came so close, and it was tough to get so close to realizing a dream and to not come through and not realize the dream, but I think a few things helped,” Kuchar said, alluding to the supportive messages. “I think that was a healthy thing. Just a whole lot of positivity coming out of that.”