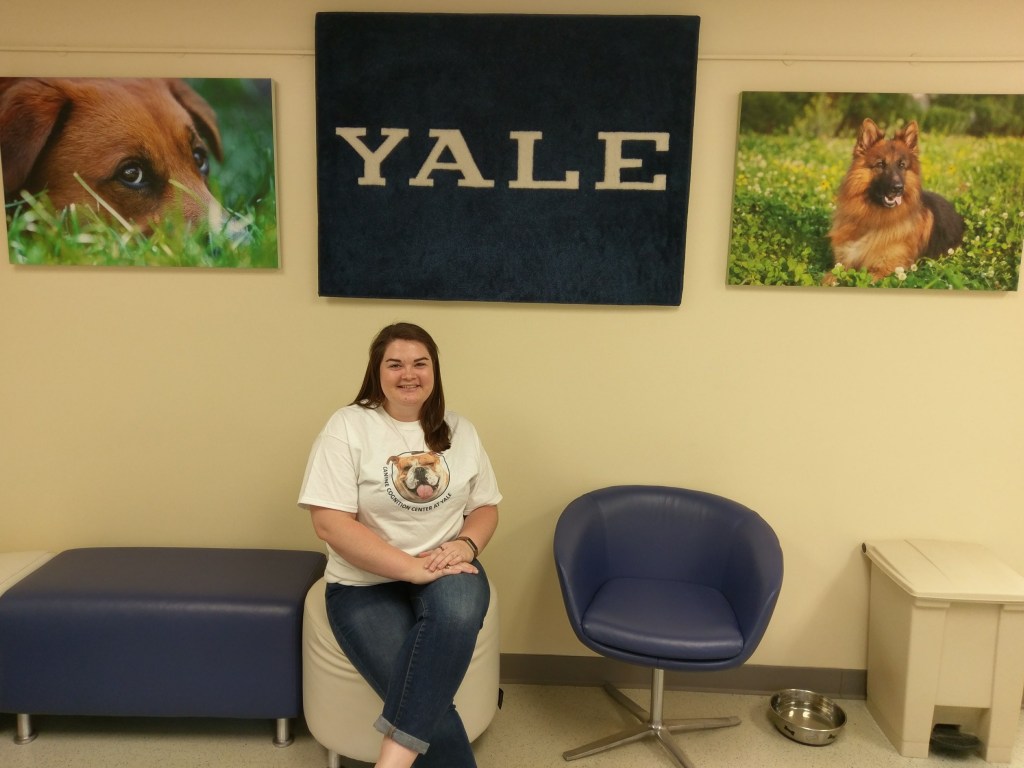 The rising senior from Burlington, Connecticut, landed a competitive internship at Yale University’s Canine Cognition Center where she joined eight other interns who studied dog thinking.

Woods, who is pursuing a double major in biology and psychology with minors in environmental science and honors, said the Canine Cognition Center is a research facility of Yale’s psychology department that studies “both the social and cognitive psychology of canines, such as how they perceive their environment, solve problems and make decisions.”

Participants, she said, “are domesticated, family dogs whose guardians participate as volunteers.”

Although the interns have to “be professional with the dogs,” Woods said, “once we bring them back into the lobby, we are allowed to give them attention and love on them” — with their guardian’s permission.

“During a visit, each dog will participate in two to three studies depending on their track and will come in multiple times throughout a semester, completing the docket of studies,” Woods said.

“The lab is quite funny. On their first visit, the dogs get an acceptance letter to Yale, and on each subsequent visit, they get certificates for completing their freshman, sophomore, junior, senior year and so on. The highest academic level a dog has been awarded so far is a master’s degree. As well, along the way, they get tapped into Scruff and Bones, take the doGRE, study abroad, get inducted into Paw Beta Kappa and are awarded the Fulbark Fellowship, to name a few. The guardians love each award.”

All interns in the Canine Cognition Center have projects that are considered their own, but they are actors or camera operators for other studies. Woods’ project involved conducting “research assessing if canines detect and develop a preference for competence in humans.”

“Borrowed from infant research in social psychology, it is known that canines detect and prefer warm human companions, but there has not been much research conducted on the topic of competence,” Woods said. “From an evolutionary perspective, it would be in their best interest to detect competence, as through the domestication process, canines have come to rely on humans much more than their wild counterparts, such as dingoes, and competent humans secure more resources and provide safety.

“Also, as an actor in a separate study, we examined if canines assume efficiency in human actions. As each project is an extension of ongoing research, at the start of the summer, we memorized scripts and the precise actions or movements associated with the studies.

“Over the course of the summer, I also completed a dependent measure looking-time coding project of the rhesus macaques of Cayo Santiago, a component of a graduate student’s ongoing research,” Woods said, “I attended weekly laboratory meetings reviewing and discussing developments in comparative cognition and participating in brainstorming sessions.

“Our week consisted of two to three days of running participants, a process commonly compared to performing a theater show, with about eight hours of performances going from dog to dog. Our additional days were assigned for coding — about 10 hours a day — lab meetings and professional development.”

Woods and her fellow interns also had the chance to attend biweekly professional development workshops outlining the pros and cons of attending graduate school, preparing them for the application process, and describing the daily life of a graduate student by those who are in the thick of the program.

As a component of the professional development workshops, Woods drafted a personal statement for graduate school applications and received feedback from her peers and Yale professors.

“Accepting a summer internship with the Canine Cognition Center at Yale University broadened my practical research knowledge and also confirmed my future aspirations.

“The field of comparative cognition is greatly tied with developmental psychology; as the name suggests, much research with canines and nonhuman primates are comparative studies to infants and adolescent children. I often found my interests floating back to the realm of social psychology when reading academic articles and during brainstorming sessions.

“I am now confident that I would like to pursue a graduate degree in the field of social and personality psychology, an insight I would not have confirmed if it were not for this internship experience.

“At the start of this summer internship,” she said, “I had plans to attend graduate school but was not confident in an academic field and only had a foundational understanding of what it means to be a graduate student. As the internship has drawn to a close, I can now say with certainty that I would like to pursue a graduate degree in social and personality psychology, with an emphasis in behavioral endocrinology, and I have my eye on four specific programs. This summer internship has provided clarity and prepared me to pursue these interests.”

Sheila Brownlow, Woods’ academic adviser, said she is proud of Woods for both landing the prestigious summer internship and the research work she completed there.

“She’s a terrific writer and has done a wonderful job telling me what she’s been up to and making me laugh (and amazing me),” Brownlow said. “She is one of our best.”