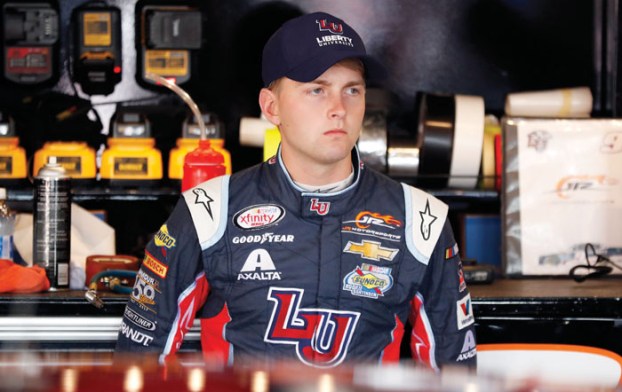 CONCORD (AP) — A racing fan who grew up in North Carolina, William Byron remembers peering into windows at Hendrick Motorsports.

Soon, he will be on the opposite side of the glass.

Hendrick Motorsports announced Wednesday that Byron will replace Kasey Kahne in the No. 5 Chevrolet beginning in 2018, giving the teenager a top-tier Cup Series ride for one of NASCAR’s most accomplished teams. Byron is scheduled to make his Cup debut at Daytona in February.

“It’s pretty cool to be in the other side of the picture,” Byron said.

Byron, who will turn 20 in November, is in his first season in the second-tier Xfinity Series. He has three wins, including ones at Daytona and Indianapolis, and currently ranks second in points while driving for Hendrick-allied JR Motorsports. He also won seven times — a record for a rookie — in the Truck Series in 2016.

“You can’t teach speed and you can’t train talent,” Hendrick said. “And he has all those other qualities: Smart, dedicated, culture, work ethic. He’s got the whole package.”

Byron will join seven-time champion Johnson, Chase Elliott and Alex Bowman in Hendrick’s four-car Cup lineup next season. Instead of the star-studded group that featured Gordon, Johnson and Earnhardt a few years ago, the team will have three drivers under the age of 25 and Johnson, who will turn 42 next month.

“I don’t really have much of a concern,” said Hendrick, adding that Johnson will be a mentor while Gordon and Earnhardt will still have roles with the organization. “So they’ve got a lot of coaches. But the main thing is just not putting too much pressure on them and letting them go out and learn.

“If William continues to do what he’s done in every series he’s been in, he’ll adapt fine and he will learn. You might as well let him learn in what he’s going to be driving for years to come.”

Kahne and Hendrick agreed to part ways Monday, just weeks after Kahne earned a playoff spot by winning the Brickyard 400. Hendrick said Wednesday that his former driver remains under contract for another year and likely will land at an “alliance” program next season.

“I’m not going to mention the team, but there are several situations that we’re talking to (about) kind of an alliance, which would be good for everyone,” Hendrick said. “We’re working on it. We’ve been working on it. We’ll just see how it develops.”

Byron’s car will be sponsored by Axalta Coating Systems and Liberty University.

His promotion is the latest in a youth movement for NASCAR, which has seen Gordon, three-time champion Tony Stewart and Earnhardt retire in a little more than two years. Former champions Matt Kenseth and Kurt Busch are among veterans who remain unsigned for next season.

Earnhardt said last weekend at Watkins Glen that there’s been “a major shift in how much drivers are getting paid,” adding that newcomers are making a fifth to a 10th of what veterans had been getting.

“You can’t pay a driver five to eight million dollars a year if you ain’t got but $10 million worth of sponsorship,” Earnhardt said. “That ain’t going to work.”

Hendrick said the “cost to race” has increased, and teams have had to find ways to save money.

“In our business, we just want to win,” Hendrick said. “Our brand is all about trying to win races and grow for the future. I plan to be in this a long time. I’m real excited about having a guy that’s won as much as William has. I love the dedication he’s shown.

“I think we are positioning ourselves for the future. We want to be here. I’ve been in it a long time and I want to see our organization grow and grow with these talented drivers.”