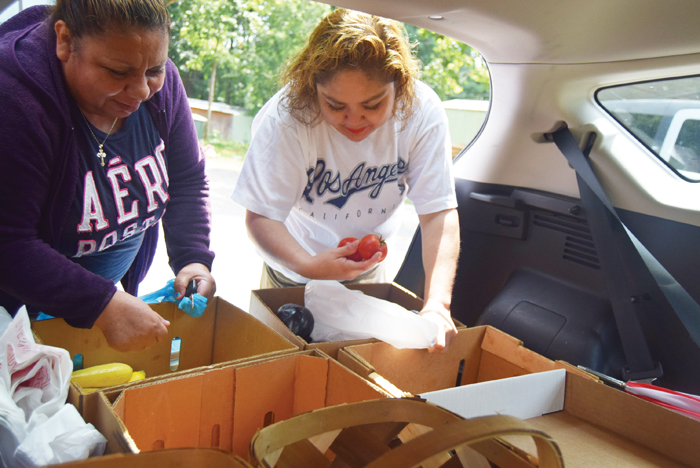 Residents from Matika Village pick out produce from local farms. This is the second summer that Bread Riot has donated fresh fruits and vegetables to certain neighborhoods serviced by the school system's Summer Feeding Program. Rebecca Rider/Salisbury Post

SALISBURY — Carol Corken handed out plastic bags as residents of Matika Village gathered around the trunk of her car. The hatchback was raised, showing off boxes of jewel-bright squash, tomatoes, eggplant and potatoes.

Behind her, the school system’s “Yum Yum bus” rumbled, and children climbed the steps to get a free lunch courtesy of the Summer Feeding Program. While the kids ate on the diner-like benches inside the bus, Corken waved the parents over.

“Come get some free fruit and vegetables,” she said. “Pick out anything you like.”

Corken, a volunteer and board member with Bread Riot, has been making the rounds with the Yum Yum bus for the past two weeks, turning the back of her car into an impromptu market. Except everything in Corken’s car is free.

It’s the second year that Bread Riot has partnered with the Summer Feeding Program, targeting rural areas and local food deserts to offer free, fresh produce. Last year, the nonprofit group handed out roughly 600 pounds of fruits and vegetables. So far this year, Corken estimates she’s given out about 500 pounds.

Everything is local, grown at and purchased from nearby farms.

“I’ve been going to different farms to get produce to kind of share the wealth,” Corken said.

Last year, Bread Riot was awarded a grant and purchased leftovers from the farmers market.

“This year, we’re just using some of our general funds,” Corken said.

She estimated the summer program has cost about $300. So far, Corken has purchased produce from All Grown Up, Larry Pruett, Two Pigs Farm, Miller Farms and Correll Farms. Any unclaimed produce is donated to Rowan Helping Ministries.

The giveaway is in line with Bread Riot’s mission, which is to educate the public and encourage shoppers to buy locally produced food. Specifically, Corken and the board were hoping to reach people who might be dependent on food stamps. Often, Corken explained, those on WIC or other benefits try to get “more bang for their buck” when it comes to grocery shopping.

“And unfortunately, the cheapest thing is carbs,” she said.

That often means the children in these households are growing up without a steady diet that includes fruit and vegetables. While some stalls at Salisbury’s Farmers Market do take food vouchers, a lot of people may not have transportation there.

“We want people to have that option — to have exposure,” Corken said.

So a few times a week, Corken loads her trunk and sets out, following the blue and green bus on its route. Wednesday’s stop at Metika Village was her last for the summer, but Corken said Bread Riot will keep up the work with upcoming fundraisers like Share the Harvest and Riot in the Pasture.