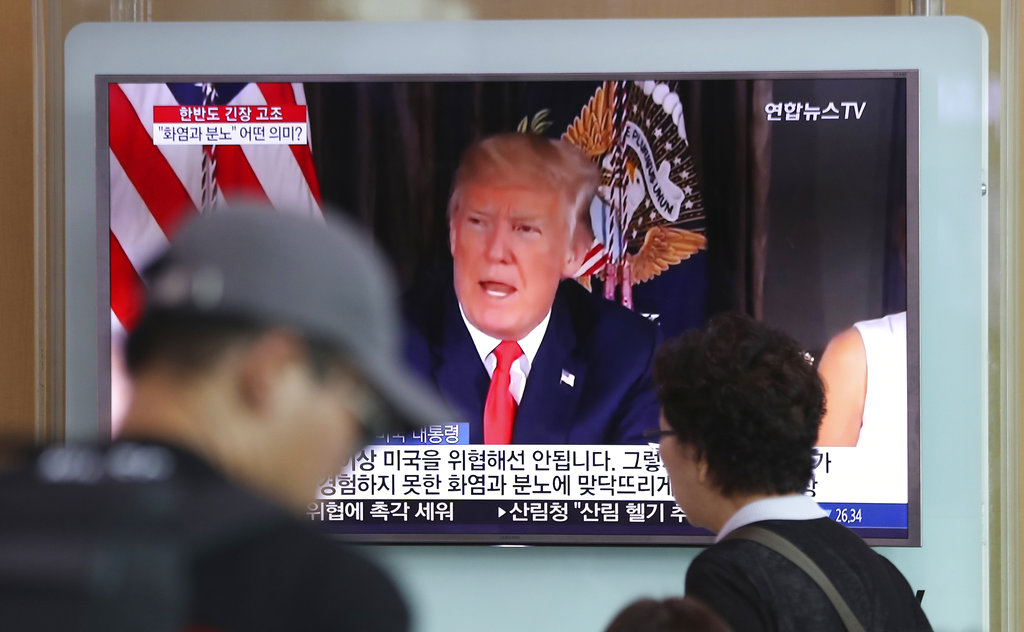 People walk by a TV screen showing a local news program reporting with an image of U.S. President Donald Trump at the Seoul Train Station in Seoul, South Korea, Wednesday, Aug. 9, 2017. North Korea and the United States traded escalating threats, with President Donald Trump threatening Pyongyang "with fire and fury like the world has never seen" and the North's military claiming Wednesday it was examining its plans for attacking Guam. (AP Photo/Lee Jin-man)

By Noah Feldman
Bloomberg View
The consensus right and left seems to be that President Donald Trump’s apocalyptic threat of “fire and fury” should North Korea continue its provocations has actually brought the possibility of nuclear annihilation closer. But hardheaded analysis suggests that, however unpresidential his rhetoric, Trump’s words have not appreciably increased the risk of war between the U.S. and North Korea.

True, the New York Stock Exchange closed slightly down after his remarks, and the Nikkei was down 1.3 percent. But those relatively mild reactions probably reflect a reminder that such a war is, in fact, conceivable — not a change in its probability.

Three prominent arguments have been made in criticism of Trump’s statement. All are valid, but none truly shows that he upped the likelihood of war.

The first and most plausible criticism is that Trump set a red line for North Korea — no threats against the U.S. — that he isn’t actually prepared to enforce. This criticism is reminiscent of what President Barack Obama faced for giving Syrian President Bashar al-Assad a red line — no chemical weapons — and then failing to enforce it.

The trouble with this argument is that it was obvious from the first and to everyone that Trump’s statement on Tuesday didn’t mean that any verbal threat by North Korea would be met by nuclear bombs. Using nuclear force in response to words would be grossly disproportionate: illegal, immoral and foolish.

And we know for a fact that North Korea didn’t take Trump’s threat literally, because within a few hours of his making it, the North Koreans threatened Guam. They wouldn’t have done that if they expected imminent fire and fury in response. They were just trying to signal that Trump was full of bluster.

Trump’s statement shouldn’t therefore be taken as an empty threat that would affect his ability to make a serious threat later. Trump was just being Trump. He wasn’t undercutting the credibility of presidential promises.

The second line of attack on the Trump statement is that his words made tensions worse rather than damping them down. That’s certainly true in the sense that he managed to elicit the Guam threat.

Yet it’s far from clear that elevated rhetoric on both sides actually increases the probability of anyone using force. The North Koreans like to talk big, but that doesn’t, or at least shouldn’t, affect our assessment of their likelihood of first use. The relevant actors on the U.S. side understand that North Korean rhetoric is designed to grab attention. It doesn’t shift the underlying strategic realities.

The same is true of Trump’s big talk. The U.S. strategic interest in limiting North Korea’s nuclear program is exactly the same now as it was before Trump spoke. The North Koreans know that. Trump’s rhetoric was an exercise in attention-getting. And in that limited sense, it worked.

The fact that Trump was using a technique — rhetorical excess — that we associate more with North Korea than with the president of the United States brings us to the third criticism of Trump, namely that he sounded bombastic (literally, I guess) and, in that sense, kind of bush league. Throughout the Cold War, it was customary for world leaders to speak about potential conflict in understated tones. Theodore Roosevelt’s dictum, “Speak softly and carry a big stick,” captures a still earlier version of this approach.

But the truth is that yelling loudly while carrying a big stick isn’t inherently less effective. Game theory, developed in the context of nuclear standoff, teaches that it’s the underlying capacity that matters, not the words used to describe it.

It’s true that words can sometimes be signals of underlying capacity. But in the case of nuclear firepower, there’s no possibility of insufficient information that requires a subtle reading of signals. Everyone understands perfectly well that the U.S. has sufficient capacity to destroy North Korea many times over.

The upshot is that Trump’s big talk seems unpresidential primarily because it deviates from how previous presidents have spoken. Trump sounds more like a TV or movie president offering a pungent rebuke to a foreign enemy than like an actual president trying to sound, well, presidential.

The world may think this makes Trump look foolish. And arguably a bit of that foolishness could rub off on the U.S.

The cumulative effect on American power, however, is likely to be negligible. The world understands at this point that U.S. democracy is perfectly capable of electing a Donald Trump — because it did. The an earlier iteration of same electorate took a chance on a former B-movie actor, who turned out to be a successful president on several dimensions.

The point is that, from an international perspective, the U.S. position in global security is more than just Donald Trump. He isn’t going to nuke North Korea for its rhetoric.

Ask yourself: Do you really, truly feel that nuclear holocaust is closer today than yesterday? I don’t. I just think that Trump is being Trump.

– Feldman is a Bloomberg View columnist. He is a professor of constitutional and international law at Harvard University and was a clerk to U.S. Supreme Court Justice David Souter. His seven books include “The Three Lives of James Madison: Genius, Partisan, President” and “Cool War: The Future of Global Competition.”