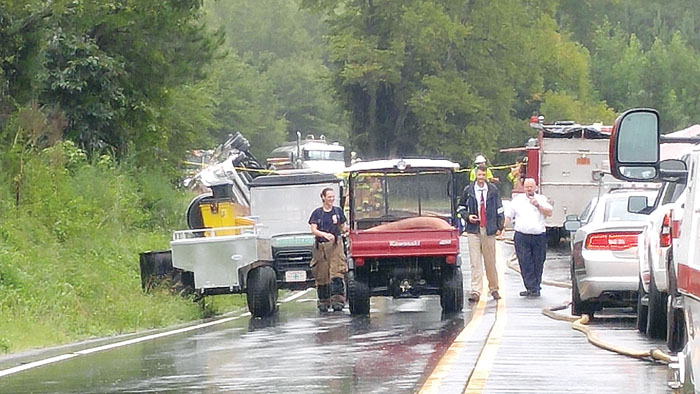 Emergency crews respond to a tanker that overturned one August morning on Bringle Ferry Road, not far from Big Buck Road. The tanker was carrying 8,000 gallons of ethanol, spilling an estimated 3,000 to 4,000 gallons onto the road. The ethanol was contained and the remaining liquid inside the truck was pumped into an empty tanker. Shavonne Walker/Salisbury Post

RICHFIELD — Sheila Shepherd and her best friend, Jackie Huffman, had a deja vu moment as they watched in horror as one after another emergency vehicles rushed down Bringle Ferry Road early Tuesday morning.

The firetrucks and soon-to-follow hazardous materials trucks made their way just beyond Big Buck Road in Richfield, where a tanker had overturned and spilled ethanol on the ground and in a nearby ditch.

Memories flooded back for the childhood friends.

“We looked at each other and said, ‘I bet it’s another tanker,'” Huffman said.

Shepherd and Huffman, along with their friend Heather Helms, were all displaced two years ago when a similar crash occurred in front of their homes. On April 2, 2015, the women evacuated their homes at 11510 Bringle Ferry Road after a tanker overturned, killing the driver and spilling ethanol. Helms lived in a mobile home next door to Shepherd and Huffman’s brick home, but they shared the same well system.

Shepherd got confirmation when she drove the nearly four miles to the accident scene to find a tanker had overturned and spilled an estimated 3,000 to 4,000 gallons of ethanol. The single-vehicle collision occurred about 8 a.m.

N.C. Highway Patrol Trooper C.J. Doty, who was the primary investigator, concluded that the tractor-trailer was traveling west on Bringle Ferry Road. The driver, David Milton Griggs, 63, of Clemmons, at some point went off the road to the right and overturned.

Griggs was driving for Hot-Z Transportation Services, based in Salem, Virginia. Moultrie said that speed did not appear to be a factor. Charges are pending in the crash.

“Shortly after the truck overturned, there was a leak. There still remains to be a small leak from the tanker. The ethanol is contained to the area immediately surrounding the accident scene. There’s no current runoff that we are aware of,” said Frank Thomason, director of Rowan County Emergency Services, who was at the scene.

Hot-Z Transportation Services had a cleanup company on the scene.

Thomason said the cleanup process includes pumping 7,500 gallons of ethanol still left in the tanker into an empty tanker.

Thomason said some 250 gallons spilled from the wreckage into a ditch alongside Bringle Ferry Road.

“There are a number of pre-planned precautions that we’ve taken and that includes establishing safety zones not only for the public, but for our responders also. Those precautions are in place at this scene,” Thomason said.

In the 2015 crash, Mooresville resident James Richard Sechler, 62, was driving a tanker carrying 8,000 gallons of ethanol that went off the road and overturned. Sechler was killed.

The tanker was owned be Eco Systems based in Franklin, Tennessee. Sechler had just returned from a fueling terminal in Denton.

Shepherd, Huffman and Helms were not able to return to their homes and, in July 2016, they left and never returned. A 600-foot ravine left by the initial cleanup efforts remains on the property. Shepherd is the plaintiff in a lawsuit filed against a number of companies, including Eco-Energy Transportation of Tennessee, Albemarle-based J.T. Russell and Sons, and Hepaco LLC of Charlotte.

The three women subsequently bought a home a short distance away.

Shepherd’s home had been in her family for decades. She said she’s been told that the water is OK to use, but Shepherd believes it’s contaminated and not safe to drink.

Tuesday’s crash happened not far from the former Kountry Market at 12955 Bringle Ferry Road and just two two miles from where the 2015 crash happened.

As with the 2015 crash, Thomason said, there was a potential risk of the fuel exploding. He said the substance is highly flammable but crews poured foam onto the truck and liquid. Crews also used absorbent booms to soak up some of the material.

Frances Morgan, who lives on Big Buck Road, not far from the crash scene, said she tried to leave her home early Tuesday morning and was told she couldn’t turn in the direction she wanted. Morgan said she didn’t hear the crash and didn’t really know why she wasn’t allowed to leave her home until she saw news about the crash on TV.

She eventually was allowed to leave and went to check on her daughter, who is ailing. When she returned, Morgan said she wasn’t allowed to go back to her home.

Officials sent Morgan to the Pooletown Fire Department, a short distance up the road, where she sat for some time waiting to find out whether she could return home. She left her car at the fire station and went in another car to get a little closer to home.

No homes in the area had to be evacuated Tuesday. The nearest home to the spill is about 600 feet away and is vacant, according to Morgan.

Pooletown Fire Chief Ryan Barkley said the crash was initially reported as a vehicle crash and quickly upgraded to a crash with a fuel spill. By the time Pooletown firefighters arrived, the driver was out of the tractor-trailer.

Traffic was detoured onto Richfield and River roads.

Barkley said there were a large number of responders in part because of the potential danger and because the fire tanker trucks were needed to pump water.