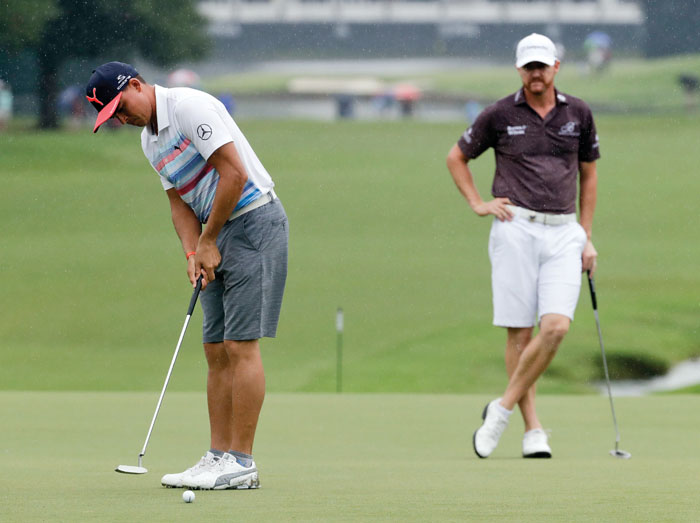 For the first time in its 99-year history, the PGA Championship allowed players to wear shorts during practice rounds this week , in part to combat the August heat in North Carolina. But on a rain-soaked Tuesday, only about half of the players took advantage of the change, with many like Rory McIlroy choosing to stick with long pants.

“This feels great,” Laird said following his practice round. “It gets a little hot out here during the summer.”

The running joke leading up the PGA Championship was that no other major championship course had so many white stakes — except they weren’t boundary markers. They were legs.

“Everybody is razzing each other a little bit,” defending champion Jimmy Walker said. “Some guys look good in shorts and some guys don’t. It’s pretty funny. There are a lot of untanned legs out there. You can tell those Florida boys, they have been soaking the sun up. I’ve been up in Utah and overseas for a few weeks so my legs are kind of untanned.”

Johnson, the world’s No. 1-ranked player, wore long pants on Monday out of habit, later saying he completely forgot about the rule. But he wasn’t about to make the same mistake twice, throwing on shorts for Tuesday’s practice round.

“Hopefully we can do this a little more,” Johnson said.

Even Ernie Els and Phil Mickelson, who are gearing up for their 100th majors this week, opted for shorts on the practice tee.

“I love that they took a risk and did something with the players in mind and I think it’s turned out well,” Mickelson said. “I hope that their example gets followed by the tour. I think it would be a great thing.”

McIlroy, the odds-on favorite to win the tournament, said he opted for long blue pants when he looked outside in the morning and saw dark skies.

“Hey, if it was sunny it would be great,” McIlroy said with a laugh. “Obviously it’s raining out. So I don’t get why people are wearing shorts.”

Still, McIlroy is one of many golfers who likes that the rules have been relaxed.

While the look Tuesday was in stark contrast to a century ago when golfers wore coats and ties on the course, McIlroy said the game needs to adapt because tournaments are being held in warmer climates during summer months.

“I know walking 18 holes around there, if it was hot and humid and in the 90s, as it is here sometimes this year, shorts are very much appreciated,” McIlroy said.

Some traditionalists have criticized the move, saying it’s inappropriate and lacks class. Others point to the LPGA Tour, where women have worn shorts and skirts for years.

“I don’t think there’s anything wrong with professional golfers showing the lower half of their leg,” McIlroy cracked.

Italy’s Francesco Molinari called the change “a step in the right direction” for golf.

He’s among many professional golfers who’d like to see the PGA Championship allow players to wear shorts during competition, not just practice rounds.

“Hopefully one day we will get there,” Molinari said.