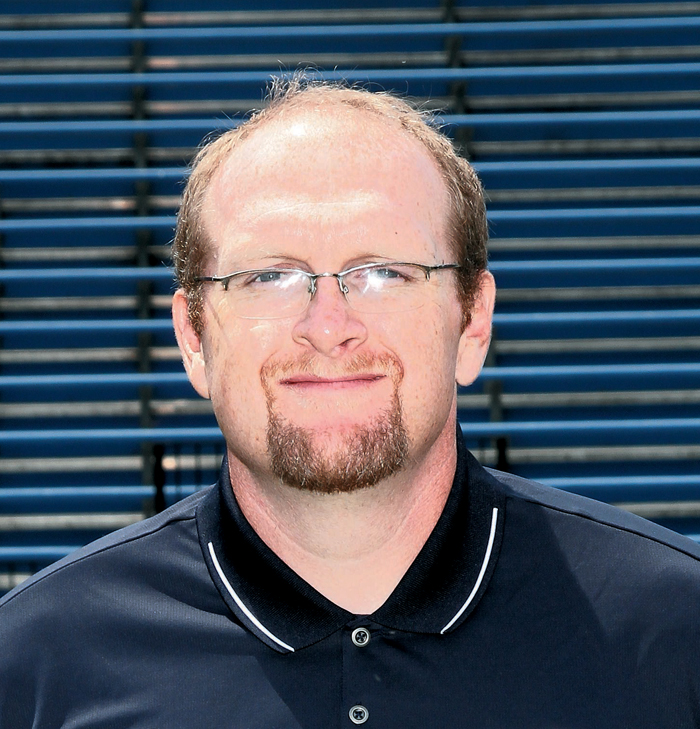 SALISBURY — At Salisbury High, the weight room is new. So are some of the coaches and many of the opponents in a beefed-up 2A Central Carolina Conference.

Brian Hinson, whose last high school coaching gig was at East Rowan in 2009, is in charge of the Hornets after a long stint as Catawba College’s offensive line coach.

Hinson, a two-time first team All-American in his playing days on the offensive line for Catawba in the late 1990s, credits the upgraded weight room with some of the enthusiasm he’s seeing from the Hornets.

“It’s like when you go to the beach and you want to stay in the nicest place that you can find,” Hinson said. “You want to give your players the very best facilities that you can. It shows that you care about them. I’m sure the new weight room has helped our numbers some. Our numbers were pretty good all summer.”

Hinson said the number fluctuates daily, but about 80 Hornets are practicing. As is always the case, it’s not easy to get non-driving kids to practice before school starts, so Salisbury’s jayvee numbers could swell a bit in the weeks ahead.

The Hornets have some intriguing coaching additions.

John Knox, who quarterbacked the Hornets to a 2AA state title in 2010, is back at his alma mater after college success in Charleston, W. Va., and numerous pro touchdowns in Sweden. Knox will coach Salisbury’s running backs.

Carson Herndon, who quarterbacked Davie County to the 2010 4A state championship game before playing baseball at Liberty University, will be the receivers coach.

Taylor Fender, who came out of the mountains to shine on the offensive line for Hinson at Catawba, will coach the Hornets’ o-line.

“Myers is smart and competitive,” Hinson said. “Steinman is giving us a lot of good leadership. Baker is one of those make-you-miss guys when he gets the ball in space.”

Defensive leaders have included inside linebacker Nick Austin, lineman Levaric Johniken and DBs Tyvion Wood and Jaquan Davis. The defensive backfield might be the Hornets’ strength.

The Hornets, who were 3-8 last season, will use some players both ways. Austin also will be part of the running back committee, while Baker will perform double duty in the defensive secondary.

Salisbury participated in a controlled scrimmage with Cannon School on Wednesday.

On Friday, the Hornets will compete in a scrimmage at Mount Pleasant at 6 p.m. that also will include 1A power West Montgomery.

“Those are two highly regarded teams we’ll see there,” Hinson said. “We’ll find out a lot about ourselves.”

Salisbury’s season starts with a bang at rival North Rowan, which is now a 1A non-conference opponent, on Aug. 18.

Former Salisbury coach Joe Pinyan, who won 100 games at the helm of the Hornets, will bring his Carson team to Ludwig Stadium for the home opener on Aug. 25.

Salisbury will finish up the regular season with South Rowan,  now a league opponent. South will be playing 2A for the first time in the school’s history.

Salisbury will play eight CCC games, including contests against league newcomers North Davidson and Ledford, who are stout in football. Both are sliding down to the 2A ranks, as they had enrollments slashed by the new school that opened in Midway — Oak Grove. Both schools will still have their varsity veterans.

Oak Grove will be getting mostly young students this year. The Oak Grove Grizzlies are only going to play jayvee football this fall, although they’ll be competing in the other varsity sports. Oak Grove plans to debut in varsity football in 2018.

“A big conference means easy scheduling, and as far as travel, this is a great conference for us,” Hinson said. “We’ll have nine conference games next year when Oak Grove is added.”

Ledford, which has been in the same league as Salisbury often over the years, is about 35 miles from Salisbury. That should be as far as anyone will have to travel in the CCC.