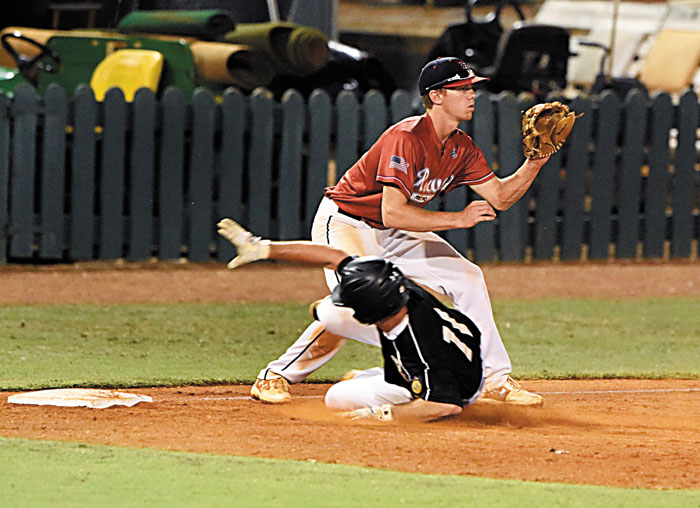 SHELBY — At Catawba College, where he got into 20 games as a freshman backup catcher during the 2017 season, Cameron Morrison was the rookie, the kid.

But on the Randolph County Post 45 American Legion team that starts play in the World Series in Shelby tonight at 8:15 p.m., Morrison is like an assistant coach. He’s beyond experienced. He’s been there and done it all.  He’s played in more games than anyone in program history.

“I started playing for Randolph County on the red (Junior) team,” Morrison said. “I’ve been on the big team the last four years. I’ve been around the longest, so I try and encourage the younger players to do the right thing on the field and off the field.”

Morrison had a chance to play for the Asheboro Copperheads this summer. That’s the college wood bat team that shares Asheboro’s McCrary Park with Post 45. Playing for the Copperheads and swinging a wood bat against Division I pitchers would have accelerated Morrison’s development as a hitter, but Jim Gantt, who coaches Catawba as well as the Rowan County Legion team, is glad Morrison made the decision that he did. Morrison’s skills as a catcher and his leadership qualities have grown by leaps and bounds. Those things are going to benefit Catawba’s program in the future.

“He could’ve played against stronger competition in a wood bat league, but the leadership aspect of things can’t be underestimated, especially for a catcher, and he’s been in a leadership role all summer,” Gantt said. “You can tell Cameron is playing for something important every time he walks on the field. That means a lot as far as his development.”

For Morrison, the deciding factor of another year of Legion ball was playing time and the chance to keep competing alongside longtime friends.

“I probably could’ve caught half the games for the wood bat team, but Legion ball meant the chance to catch just about every night,” Morrison said. “I’ve had a chance to call pitches and handle a pitching staff, and I know I’ve gotten better at those things.”

Morrison is from the small town of Robbins, about 30 minutes south of Asheboro.

He went to 1A North Moore High and did a little bit of everything for the Mustangs, including pitching. He threw a no-hitter in the first round of the 2015 1A state playoffs.

He’s played wherever Randolph County needed him over the years. Post 45 had two strong catchers last summer in Jay Rorie and Trevor Clemons, so Morrison wasn’t needed behind the dish.

“I played first base or left field depending on who was catching,” Morrison said.

Gantt wasn’t wowed by Morrison, but he did notice him.

“We knew he could hit a little bit,” Gantt said. “We didn’t have any idea what kind of catcher he was, but (Randolph coach) Ronnie Pugh recommended him to us, mostly because of the character he had and because of how hard he worked. When Ronnie recommends someone, you listen. He’s helped us recruit a lot of outstanding players and outstanding people. Cameron is one of those people you’d trust with the keys to the house.”

Gantt offered Morrison a spot on the Catawba team.  Morrison knew that’s where he wanted to go to school as soon as he toured the campus.

Morrison sweated his way into the role of Catawba’s No. 2 catcher as a freshman. The No. 1 guy was Zac Almond, an explosive power hitter with a cannon for a right arm. Almond was drafted after his junior season by the Arizona Diamondbacks and is currently playing professionally.

“Zac is unbelievably talented, but we were so alike as far as our love for the game and our willingness to work hard at it,” Morrison said. “I tried to mimic the things Zac did. I learned a lot from him and  I learned a lot about catching from (assistant coach and former Catawba catcher) T.J. Wharton.”

Morrison contributed six hits and seven RBIs in spot duty for the Indians. With Almond gone, he’ll enter this fall with a chance to be the first-stringer. This summer has helped him immeasurably.

Randolph started this summer with a 1-5 record that included two early-season losses to Rowan County. But Randolph got things rolling in the Area III playoffs. Rowan rallied for two runs in the bottom of the ninth to beat Randolph in the first game of the best-of-three Area III championship series, but Post 45 came back to win the next two. In the decisive game of the series, Randolph won at Newman Park, 8-3, the only home loss Rowan suffered all season.

“That game and that series made a difference for us,” said Morrison, who belted two homers against Rowan. “Rowan was last year’s World Series runner-up, and we knew if we could beat them, we could beat anyone. That series showed us what we could do and our confidence has been high ever since.”

The current win streak for Randolph (38-8) has reached 12 games.

At the conclusion of the Area III championship series, Morrison had four homers, four triples, 15 doubles and 33 RBIs and a .408 batting average, so he’ll be a candidate for Area III Player of the Year honors.

Randolph used the momentum it gathered in the Rowan series to steamroll undefeated through the state tournament in Greenville as well as the Southeast Regional in Asheboro.

Asheboro High’s Trevor Marsh swung a torrid bat in the regional, while Morrison drove in the only run of a 1-0 game when Randolph beat Florence, S.C.. That was the win that put Randolph in the driver’s seat.

“There was always a feeling that someone would come through in both tournaments,” Morrison said.

Morrison was surprised at the number of Rowan fans who drove to Asheboro to support Post 45 in the regional. He hopes they also will make the trip to Shelby.

As good a hitter as he’s been this summer, Morrison’s primary contribution is always going to be what he does behind the plate and what he does as the team leader.

In both the state and regional tournaments, Morrison sprinted out to the mound when a Randolph pitcher, who had been staked to a lead, was nibbling and walking people.

In the state tournament, Pugh took a step out of the dugout, but then he saw Morrison had the situation under control and remained where he was.

In the regional tournament. Pugh ambled out to the mound, but he didn’t have to say a word. Morrison did all the barking. Pugh just nodded and slapped the hurler on the back.

“Oh, yeah, I remember,” Morrison said with a laugh. “It was the same pitcher both times, and both times he responded and got the job done. All I told him to throw strikes and make them put it in play. We’ve got a good defense. We need to let them work when we’ve got a lead.”

The Randolph team arrived in Shelby on Tuesday for check-ins and meetings. After that, it was a matter of trying to relax and get some sleep. Not an easy task with the biggest games of their lives looming.

“I’m told that there might be 7,000 people watching us play (Hopewell) New Jersey on Thursday night,” Morrison said. “Playing in front of  a crowd that size is going to make it different for all of us, but it’s still baseball. We’ve just got to go out there and play like we’ve been playing.”