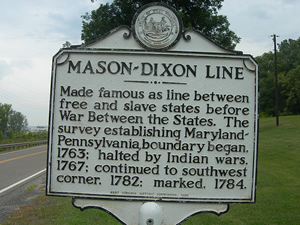 A marker in Pennsylvania notes the Mason-Dixon line.

Precisely two and a half centuries ago, two English surveyors — Charles Mason and Jeremiah Dixon — completed work on a boundary line that resolved a long, bitter dispute between the colonial proprietors of Maryland and Pennsylvania.

Their work was soon forgotten. Indeed, the official report on the survey issued in 1768 didn’t even mention their names. Without question, neither Mason nor Dixon ever heard or saw the phrase “Mason-Dixon Line.”

Yet today, 250 years later, the Mason-Dixon Line is America’s most famous boundary, and, with the possible exception of the equator, it is the most widely known line in the world. It is been celebrated in songs and books, and the phrase appears regularly on radio and television.

How, then, did it get to be so famous?

The first step came on March 1, 1780, when Pennsylvania abolished slavery — and the longest section of the 12-year-old Line, some 233 miles long, became the boundary not just between Pennsylvania and Maryland, but between freedom and slavery.

It didn’t really matter for several decades because whites were allowed to keep existing slaves. There were slaves in Pennsylvania well into the 1820s. In fact, there were Pennsylvania farmers who were able to have slaves until just before the Civil War by domiciling them in Maryland. Each day, they brought them across the Line to work in the fields.

It was during the rancorous debates in Congress over the Missouri Compromise of 1820 that the Mason-Dixon Line first came to symbolize the division between the slave-holding South and the free North.

Thomas Jefferson immediately saw the new significance of the Mason-Dixon Line, and he wrote to a friend: “A geographical line, coinciding with a marked principle, moral and political, once conceived and held up to the angry passions of men, will never be obliterated; and every new irritation will mark it deeper and deeper.”

As the national debate over slavery heated up, the Line was figuratively extended across the entire nation. This required it to have a name, and the Mason-Dixon Line seemed to fit. The phrase took on its powerful, symbolic meaning, and in a speech to the Historical Society of Pennsylvania in 1854, historian John H.B. Latrobe said:

“There is, perhaps no line, real or imaginary, on the surface of the Earth whose name has been oftener in men’s mouths during the last 50 years. In the halls of legislation, in the courts of justice, in the assemblages of the people, it has been as familiar as a household word.”

Eventually, the Line, which only runs from the Atlantic Ocean to a point in Western Pennsylvania, came to symbolize the dividing line between North and South. And it still does today.

In the years prior to the Civil War, the Line became the goal of every slave seeking freedom in the North along the Underground Railroad. Coded spirituals were used by slaves plotting an escape. The River Jordan sometimes meant the Line and the Promised Land was Pennsylvania. “Follow the Drinking Gourd” was the code spiritual for the North Star, which was found in the Big Dipper.

The fugitive slaves were helped in their escape by Pennsylvania whites and free blacks who hid them in root cellars, spring houses, crawl spaces, secret compartments, trapdoors, corn cribs and other “stations” along the Underground Railroad. In this way, a small, voluntary and spontaneous group of white and black people worked to usher black runaways to freedom, and thousands of enslaved men and women escaped by riding an imaginary railroad across an imaginary Line.

One of the great figures of this time was Harriet Tubman, who made dozens of journeys across the Line guiding fugitives to freedom. She herself escaped, and some biographers record her reaction on her initial flight to freedom:

“I had crossed the line of which I had so long been dreaming. I was free. I looked at my hands to see if I was the same person. There was such a glory over everything. The sun came through like gold through the trees and over the fields, and I felt like I was in heaven.”

The Line’s flame of fame burned even brighter during the Civil War, and when slavery was abolished the Mason-Dixon Line was still there, separating North from South. Up and down the Line, the racial hatred that had been seeded two and one half centuries earlier continued to be carefully watered every day.

South of the Line, Jim Crow laws enforced rigid segregation in airports, restaurants, schools, hotels, sporting events, theaters. During World War II, black and white soldiers on troop trains bound for training camps in the South would be separated at or near the Line.

Even today the Line is embedded in the national psyche as a powerful symbol, separating slave from free, North from South, Yankee from Rebel, oatmeal from grit. Or, as Mark Twain put it: “The North seldom tries to fry chicken, and this is well; the art cannot be learned north of the Mason-Dixon Line, nor anywhere in Europe.”

William Ecenbarger is a former Philadelphia Inquirer reporter and the author of “Walkin’ the Line,” a travel-history book about the Mason-Dixon Line. Email him at william.ecenbarger@gmail.com.