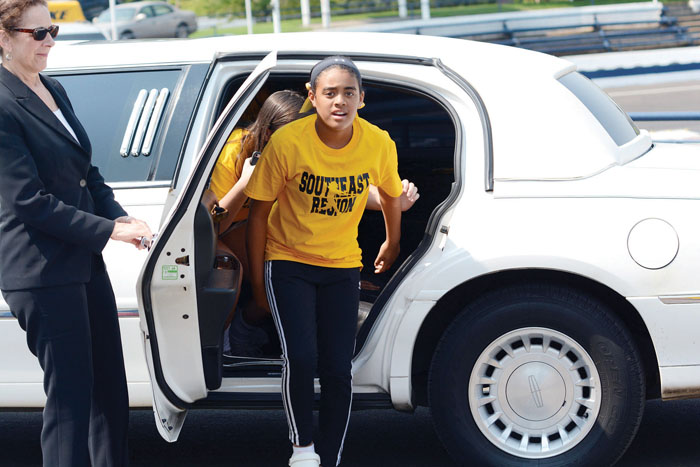 Rowan’s Cailynn Winford steps out of the limo upon arriving at the field Monday afternoon.

PORTLAND, Ore. — Rowan Little League mom Kari Ennis felt right at home when she arrived on the other side of the country for the Little League Softball World Series at Alpenrose Dairy.

She was halfway up the stadium entry when she started waving wildly and received a welcoming hug from one of the Series volunteers.
“I’m starting to feel like a local,” Ennis squealed with laughter.
It’s the third straight year that she has made the cross-country trek, watching her oldest daughter Allison play in the Series the past two years, while her younger daughter, Ashlee, is part of Rowan’s all-star squad this summer.
“Seeing both of my daughters in the World Series, being here three years in a row — it’s just not something you even think could happen,” Ennis said. “Wherever we play it seems like we have the biggest fan base.”
The team left North Carolina at 7:30 a.m., made a quick stopover in Chicago and was among the first to arrive at the Series complex around 2 p.m. Pacific time.

The team was announced on both flights, receiving excited applause from their fellow passengers.

“We won Regionals last Monday, and in just a couple days, we’ve had to plan hotels and airplane
tickets,” Ennis said. “Our community has been so supportive. We had random people giving us money in a Lowe’s parking lot to help get the girls here.”
The team was picked up at the airport in a pair of limousines for the 45-minute drive from the airport to Alpenrose.
“Little League does a great job — they treat the girls like superstars,” Ennis said.
Shortly after arriving, the girls were fitted for their yellow and black Southeast uniforms, then it was off to the main field for a photo shoot, followed by a trip to the concession stand for lunch. The day ended with a trip to Easton, to get geared up with bats and bags for the Series.
It’s a whirlwind, especially for the nine players who are making their first appearance at Alpenrose. The coaching staff is looking to returning players Kenadi Sproul, Brooke Piper, Bentli Meadows and Madelyn VonCanon to set the tone for the week ahead.
“They are being leaders on and off the field,” Rowan coach Johnny Meadows said. “They are talking to the other nine and not allowing the nerves to get the best of them.”
Meadows coached a Rowan squad at the 14U World Series last year, but the 12U Alpenrose version comes with the extra exposure of the ESPN cameras that roll in next week for bracket play.
“This brings a little more TV time, which is some pressure, then you have trying to get back to the finals again and that brings a bit of pressure … but as coaches, we are here for the kids and to help them experience something special,” Meadows said.
The Easton Skills Competition is at 7 p.m. Tuesday with Sproul in the base-running challenge, Brooke Kennerly in the catcher’s ‘Throw-Down’ competition, Karsen Simpson in the pitching accuracy challenge and Madelyn VonCanon in the home run contest.
“There’s always a lot of excitement when you see a teammate win one of those,” Meadows said.
The Rowan squad gets a break in pool play Saturday, and is planning a mix of potential excursions.
In past years, the team has taken trips to the North Oregon coast and to Multnomah Falls in the historic Columbia River Gorge. Last year, a bunch of families made a visit to the Oregon Zoo just outside Portland, while the Nike store in downtown Portland is a favorite among the players.
“I’ve been growing up with these girls since they were 7 years old — the girls, the families we’re all
good friends. It’s a group that hangs out together whether it’s going to the movies or birthday parties,” Ennis said. “This is a vacation for us — we just have fun being together.”