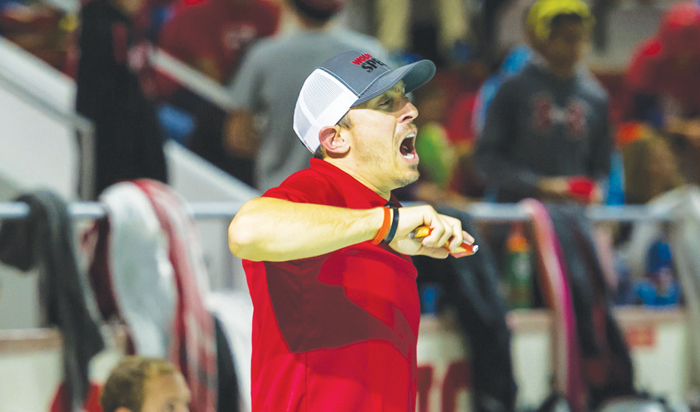 N.C. State sports information PHOTO ... Todd DeSorbo, former star at Salisbury High School and the Rowan Aquatic Club, has been named head swimming and diving coach at the University of Virginia. He had been associate head coach at N.C. State.

DeSorbo joins UVA after serving on the staff at N.C. State for the past six seasons as the associate head coach.

“I’m excited to welcome Todd to the Virginia athletics family,” Littlepage said. “He will bring great passion and energy to our swimming and diving programs. Todd has developed world-class student-athletes and he’s played an instrumental role in the transformation of N.C. State’s program to a championships level. He will bring highly talented student-athletes to Grounds and display an unwavering commitment to helping them reach their goals in and out of the pool.”

DeSorbo has been instrumental in the rise of the Wolfpack program. The N.C. State men have won the last three ACC titles. The Wolfpack women captured the 2017 ACC title, ending UVA’s streak of nine consecutive conference championships in the sport.

Both N.C. State programs produced their highest finishes at the NCAA Championships this past season. The Wolfpack men placed fourth overall while the women’s team finished seventh.

“I’m honored and humbled for this opportunity to lead the University of Virginia men’s and women’s swimming and diving programs,” DeSorbo said. “UVA’s academic reputation for excellence coupled with the support from a phenomenal athletics department provides an environment for success at all levels.  I’m appreciative to the administration at UVA, including director of athletics Craig Littlepage and senior associate athletics director Dirk Katstra for their support and confidence in me to continue to build upon UVA’s rich history. I’m excited for this next step in my career and look forward to a bright future with the Cavaliers and in Charlottesville.”

At N.C. State, DeSorbo worked primarily with the Wolfpack sprinters and was a developmental specialist. He oversaw the programs’ recruiting, training and day-to-day operations.

In 2017, his athletes earned seven individual ACC titles and garnered 14 All-ACC honors, helping to lead both programs to sweep their respective ACC Championships meets. Additionally, DeSorbo coached 13 athletes to the 2017 NCAA Championships where they collected over 30 All-America honors on the way to the teams highest NCAA finishes in program history.

On the men’s side, he led sprint standout Held to three top-eight individual performances at NCAAs, highlighted by a runner-up title in the 50 freestyle in a time of 18.60. Andreas Vaziaos also tabbed three top-eight finishes, his highest being fifth in the 200 butterfly with a conference record and school record of 1:40.80.

DeSorbo helped the women’s team clinch its first conference title since 1980. Under his leadership, Ky-lee Perry had an outstanding rookie season in which she was crowned champion in the 50 freestyle in school record pace of 21.88 and qualified for NCAAs in the 50 and 100 freestyle. Perry was named ACC Female Freshman of the Year.

In the summer of 2016, DeSorbo coached three athletes to the Rio Olympic Games, as Held qualified for the U.S.A.’s 4x100m freestyle relay, Soeren Dahl qualified for Denmark’s a 4x200m freestyle relay and Simonas Bilis qualified the 50m and 100m freestyle. Held made history as he helped the United States win a gold medal in the relay. He posted a split of 47.73 alongside teammates Caleb Dressel, Michael Phelps and Nathan Adrian to notch a time of 3:12.38.

During the 2015-16 season, DeSorbo helped Bilis finish his career as the most decorated All-American in the NCAA era with 19 honors during the 2015-16 season. At the 2016 NCAA Championship Bilis earned top-three finishes in the 50,100 and 200 freestyle, marking the fourth person in NCAA history to do so. DeSorbo also guided the men’s 400 free relay of Held, Bilis, Andreas Schiellerup and Dahl to the program and conference’s first NCAA title in a relay event.

He additionally helped the men’s squad win four of five relay events at the conference championship and the team’s second-straight conference title, as well as earn All-America honors in all five swims at the national meet.

Prior to working at N.C. State, DeSorbo spent five seasons as the assistant coach at UNC Wilmington. At UNCW, DeSorbo assisted with all facets of the Seahawks’ program, including recruiting, student-athlete development and practice.

During DeSorbo’s tenure in Wilmington, the Seahawk men won five straight CAA titles and the women finished in the top-three of the conference every year.

Prior to joining the UNCW staff full-time, DeSorbo served as the head swim coach for the Cape Fear Aquatic Club from 2005-07 and was a graduate assistant at UNCW from 1999-2000.

DeSorbo began his collegiate swimming career at the  University of Kentucky and was named the outstanding freshman swimmer for the Wildcats.

DeSorbo holds two accounting degrees from UNCW, earning a bachelor’s degree in 1999 and a masters in 2000.

DeSorbo is married to Lauren Suggs of Blowing Rock. They have a son, Jack, and a daughter, Cate.