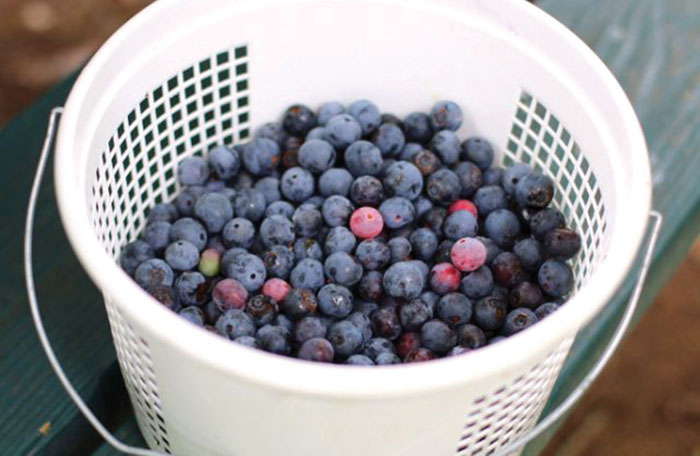 Shelia Oliver suubmitted photo A basket of juicy, ripe blueberries will benefit the picker and the Lineberger Cancer Center.

On Saturday, July 16, my mom, Sandra, and I were excited to go to Fairview to the UNC Lineberger Cancer Center Blueberry Patch near Black Mountain.

This special blueberry patch is a “pick your own” patch run on the honor system and owned by Coach Sylvia Hatchell, women’s head basketball coach at UNC Chapel Hill. Located right along Flat Creek Road in a mountain community dotted by wildflowers, it sits not far from Asheville.

The neat thing about this endeavor is that instead of charging for the berries, Hatchell simply asks that people send in whatever they can as a donation to the UNC Lineberger Cancer Center in Chapel Hill.

In October 2013, on top of the world and newly inducted into the Naismith Basketball Hall of Fame, Hatchell was diagnosed with the worst type of leukemia — acute myeloid leukemia or AML.

As the basketball season was just beginning, she immediately told family, staff and her young basketball team that she would be away to undergo treatment at UNC’s Lineberger Cancer Center after her doctors insisted they needed to get moving.

She was admitted for a month and sidelined for the 2013-2014 basketball season before returning four more times. Every day while in the hospital, she walked the halls whether she felt like getting up or not.

“It has been proven that exercise increases cancer survival rates,” Hatchell said. She believes this is what helped her successfully fight cancer. Hatchell’s treatment included aggressive chemotherapy.

“I mean, I look back and I’m just like, ‘Wow,’ you know,” Hatchell said, “when I look at that and think that I would have to go through that, I would say there’s just no way. You don’t realize how strong you can be until strong is all you have.” She believes in prayer and speaks about God being with her on this journey.

Hatchell’s blueberry patch started in 2001 with just a few bushes. The patch now holds more than 300. Hatchell helps others going through the same ordeal by raising money tirelessly for a cure. Her patch has already provided two new exercise rooms at the Lineberger Cancer Center so patients can be active while receiving care.

She wanted to motivate her fellow fighters to get out of bed like she did and move instead of getting weak. Since lighthouses outshine the darkness, one exercise room has a lighthouse theme.

The other is the blueberry room, named to honor her little patch of heaven, with blueberries painted on the walls. Both rooms include inspirational quotes. Hatchell believes that “God has a purpose for her.”

North Carolina is fortunate to have Hatchell who inspires folks on and off the court. We always talk about the “Carolina Way” which embodies “playing hard, playing smart and playing together.” Hatchell’s life exemplifies this by doing good, giving her all, making each day count and bringing people together.

Even with Hatchell’s busy schedule with recruiting and basketball camps, she was at her mountain home with the Carolina blue roof when we visited the blueberry patch and she made us feel so welcomed. I had to share this story in hopes that she will inspire others to visit the patch and support Lineberger Cancer Center.

There is an amazing connection here. Near the Western NC Farmers Market in Asheville sits a great garden center, Jesse Israel and Sons Nursery. Hatchell said Jesse’s son, Lonnie, was also treated at the UNC Lineberger Cancer Center a few years ago and because of their connection, he donates the blueberry bushes when it’s time to replace them. Shelia Oliver submitted photo Lora Owen, Sylvia Hatchell and Lora’s mother Sandra Owen, with some of the blueberries they picked. The berries are paid for by donating to Linebarger Cancer Center.

The connections continue every April, when Hatchell has a work day with volunteers who trim, replant, prune, mulch and handle any needs of the patch. One of her former players, Meghan Austin, the women’s head basketball coach at nearby Montreat College, brings her entire team to work that day.

Hatchell explained the spectacular benefits of blueberries, “Blueberries have the highest level of antioxidants and they fight cancer. These antioxidants are even more powerful than vitamin C.” Hatchell said.

Dr. Ned Sharpless, one of her UNC doctors at Lineberger, “was recently named head of the National Cancer Institute, the nation’s highest cancer agency, by President Trump.” Sharpless and his wife visited the blueberry patch recently along with other supporters to recognize and highlight the value of what Hatchell is doing.

Hatchell likes to remind folks that the bushes will keep producing until the end of August so there is plenty of time and berries for everyone to stop and pick. The patch is on level ground, accessible for seniors and small children and easy to walk. The soothing sound of the stream across the road is like soft music as it flows toward the French Broad River. Lots of visitors have picnics and enjoy the scenery. It is a soothing treat for body and soul. Nailed to a tree beside the patch is a sign, “UNC Lineberger Cancer Center Blueberries: Send donations to: Lineberger Cancer Center, University of North Carolina, P. O. Box 2411, Chapel Hill, NC 27514.”

Hatchell asked, “Where else can you go and get so many benefits?” and she’s right. You’ll have fun making memories. Everyone is friendly; you get healthy, fresh food and exercise in the cool, mountain air and there’s a good chance you’ll see all kinds of wildlife from turkeys to deer — maybe even a bear in the distance. But the best benefit is that you are supporting an important, beautiful team effort. We are all one team in the fight against cancer.

If you would like to visit Hatchell’s blueberry patch, grab a pail and head west on Interstate 40. I hope you have as much fun as I did.

Directions to the Blueberry Patch

• Continue on Flat Creek Rd for 3/10 of a mile. Destination will be on the right.