Police seeking warrants on group who brawled outside Go Burrito 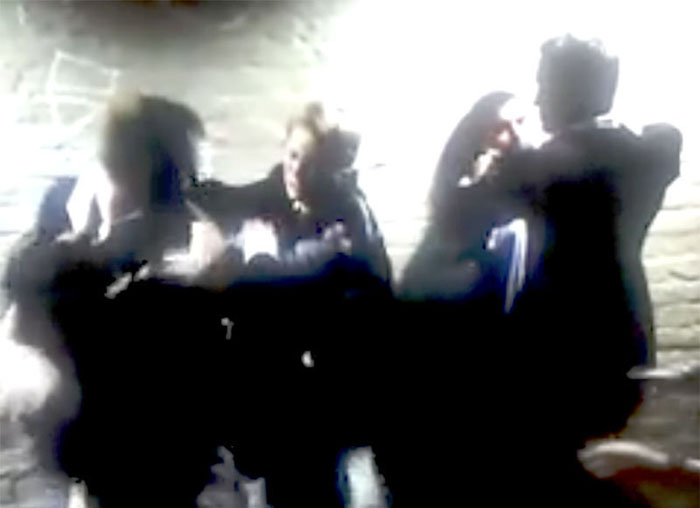 A screenshot from the video of the fight. See video below.

In a video that was circulated on Facebook, a group of well-dressed people are shown shoving and pushing each other. The video shows others trying to break up the melee. One woman who tries to break up the fight is punched and falls to the ground.

The incident occurred about 1:14 a.m. Sunday.

Deputy Chief Shon Barnes told the Post that an officer who was working off duty was on the scene shortly after the fight was being broken up, and he is believed to have some body camera footage of the incident. The officer is seen approaching those involved at the end of the video, which is less than a minute long.

Police say an officer separated two men who were fighting, and the officer saw several people with minor injuries. Other officers were called to the scene.

Police say a follow-up investigation included watching the video of the altercation.

Officials said Monday that warrants were issued for four people involved, charging them with simple affray and one for assault on a female. Warrants had not been served early Monday evening.

Police did not name the people involved.

“I don’t think anyone anticipated that the incident could’ve involved that many people so quickly, so the officer, of course, his first job No. 1 is to maintain public safety. Given the light of recent events that occurred around that particular establishment, you have to prioritize what you do,” Barnes said.

There was much discussion on social media about the delay in arresting those involved because those involved are white and were well-dressed. Two black men were shot and killed in the same area early July 29.

Barnes said the Police Department wants to give fair and equal treatment to everyone.

Barnes asked that people be patient with the Police Department, and he thanked the person who posted the video because it allowed investigators to see the incident from its beginning.

Barnes said there won’t be any changes to the way officers patrol the area because of this incident and the killings of two men in the same area last weekend. He said officers will continue to patrol the city as they always do but will reach out to Go Burrito about having a security plan in place as they have done with other businesses where similar incidents have occurred.

According to Marc Anderson, who has been a DJ at the restaurant and bar for about three years, the people involved in Sunday’s brawl came into the restaurant together. He said they had been part of a wedding party and he had met them and the bride and groom.

“I spoke to a few of them,” Anderson said. “They were energetic. You could tell they had some drinks in their system. They were loud and rambunctious, but at the time in a more positive way.”

Anderson said no one in the bar could’ve known a fight would happen later. He said if something had happened inside, the staff would have escorted the group out.

Anderson said he was upstairs as the fight occurred outside and wasn’t completely aware of what happened until the next morning when he saw the video. The video has been shared more than 540 times.

“Violence is always bad. Violence is not what you want, especially at your place of business. I believe it was handled well. The fight was broken up,” he said.

Anderson said he believes the fight was among three people, but it looks bigger because there are so many people in the video trying to break it up. He said some comments on Facebook have been a little sensationalized, but he added that everyone is entitled to their opinion.

“This is just me saying my different view. I wasn’t here, outside when it happened. I can’t say how I truly feel about it, just by what I see in the video, and I think a lot of people are doing the same thing. They just have to go by what they see in a video,” he said.

Anderson said he doesn’t think the fight is as bad as some people are making it out to be.

He said the bars in Salisbury are run by smart business owners who have qualified staff members.

“Salisbury will come through. Salisbury always comes through. This isn’t the first time it’s happened. I hate to tell ya, it’s not going to be the last. I hope it’s the last time at Go Burrito,” he said.