Editorial: The past is with us still 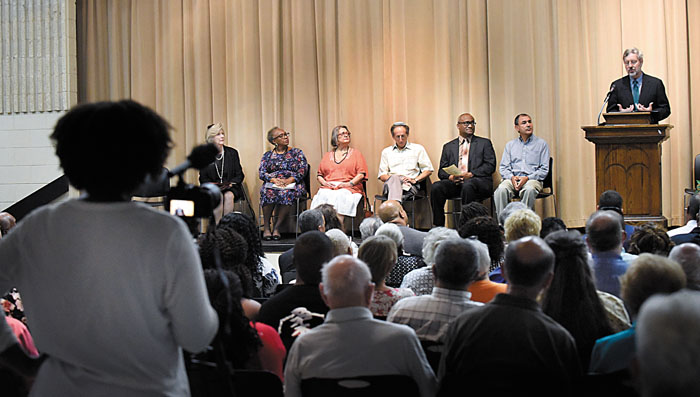 A lady shooting video of speaker Rev. Stuart Taylor, Salem Presbytery Peace and Justice Task Force speaker, at the Actions in the Faith and Justice program. photo by Wayne Hinshaw, for the Salisbury Post

Some 3,959 African-Americans died with nooses around their necks in the South between 1877 and 1950. Nothing can change that now.

Fittingly, Sunday’s public conversation about the triple lynching that took place in Salisbury 111 years ago was more about understanding the present than trying to probe the past. The people who organized the Service of Truth, Healing and Reconciliation hoped to start the process of bringing the community together. They appear to have succeeded, but they may need to steer people toward next steps.

First, though, let’s talk about the past. Terrible tragedies took place in Rowan County in the summer of 1906, starting with the brutal axe murder of the Lyerly family in their home. Isaac Lyerly, his wife, Augusta, and children Alice and John deserve to be remembered and mourned. No one wants to diminish or forget that loss.

The murders led to the lynching and mutilation of three African-America men —John Gillespie, Nease Gillespie and Jack Dillingham — who were dragged from the county jail after being charged with the crime. Rather than wait for the wheels of justice to turn, an angry mob decided to act as judge and executioner.

Nothing like that could happen today, right? Indeed it should not. We have systems of law and order. We believe in justice and due process.

Consider, though, the crowd’s frenzied rush to judgment, driven by racist stereotypes and assumptions. Quick to believe that the three men were guilty, they were determined to exact extreme punishment outside the system of justice. Could that happen today?

As William Faulkner said, “The past is never dead. It’s not even past.” The world has changed immeasurably since 1906, but the rush to judgment based on stereotypes is far from past. It is ever-present — when officers approach suspects, when store clerks eye shoppers and in countless other ways that those of us who are not African-American cannot imagine.

One example discussed Sunday was the war on crime. When cheap crack cocaine spread like wildfire through black communities in the 1980s, the government’s response was to crack down on drug crimes with zero-tolerance policies, giving stiffer sentences for crimes related to crack than for the more expensive cocaine, whose users were more likely to be white. Now that another group of drugs is tearing through largely white communities— opioids — addiction to heroin is being treated as a public health issue rather than a crime problem. Why is that?

The Salisbury community has taken a brave step, opening a grim chapter of the past that many would like to forget. Yet, organizers had to scurry to set up chairs as more people flowed in than they expected. Though this conversation is not for everyone, there’s obviously a hunger for more dialogue and understanding — for truth, healing and reconciliation. Now, what’s next?

Editorial: Sounding the alarm on opioids