Former 4-H member’s records to be put in museum 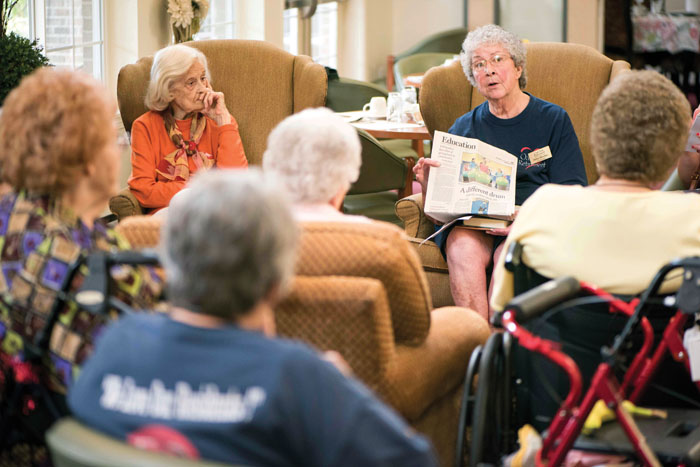 JON C. LAKEY / SALISBURY POST Oak Park Retirement resident Helen Wooten (right) shared her stories about her achievements of involvement in 4-H. She was involved with the 4-H for 50 years. Matthew McLelland , the county 4-H extension agent, was also on hand for the Fireside chat with Martina at Oak Park. Thursday, July 27, 2017, in Salisbury, N.C.

When Helen Wooten, then Helen Prevatte, first began her 4-H home beautification project, she set out with one goal in mind — to make her home more beautiful, livable and homey. Over 60 years later, the tedious records she kept as part of 4-H protocol still document her project and soon will be accepted into the North Carolina 4-H Museum in Millstone.

After seeing an article in the paper that mentioned Matthew McClellan — the Cooperative Extension’s Rowan County 4-H director — Wooten made a phone call.

“She called and said she had record books from when she was a 4-H member,” McClellan said. “I thought it was really, really cool.”

After their initial phone call, McClellan met with Wooten in April and took a look at the plethora of her meticulous records. She had several 4-inch binders full of records, mostly regarding her 1956-57 home beautification project, McClellan said. The project and her records earned her a win in the state 4-H competition and a trip to the 4-H congress — then held in Chicago.

“Seeing the record books — they were so familiar, but so different,” McClellan said. “The forms Helen had were still asking for the same information as our forms today — what you did, how you did it, how much it cost and what you learned.”

Soon after meeting with Wooten, McClellan got in touch with the N.C. 4-H museum’s curator, who became just as interested in Wooten and her records as McClellan had. The museum’s staff will vote in August to accept the books into the state museum’s collection.

“Record keeping was a way of telling people, ‘yes I did do this,’” said Wooten of her record books.

Wooten grew up as the daughter of a tenant farmer in Lumberton and joined 4-H when she was about 6 years old.

“I joined 4-H because I was so interested in becoming more just a farmer’s daughter,” Wooten said. “I wanted to excel in something that was meaningful to me.”

When Wooten was about 16, 4-H held a contest for home beautification projects. Interested in the idea of beautifying her home and transforming it from an “old farmhouse to a modern home,” Wooten said she wrote the family who owned the land on which her family lived.

“I wrote a letter to the family and asked if I took on a home beautification project, would they pay. The wife — Mrs. C. Guy Townsend — got the letter and wrote back and said yes.”

For her project, Wooten planted flower beds, transformed her family’s Robinson-County farmhouse into a modern home with running water and electricity and decorated her home.

As a state winner, Wooten was given the opportunity to travel to Chicago for 4-H Congress.

Wooten was also sponsored by Mrs. Charles Walgreen, whom she met during her trip to Chicago.

“She had her chauffeurs come and pick us up,” said Wooten. “And that night I had the first lobster I had ever had in my life.”

As a prize, Mrs. Walgreen presented Wooten with a watch. Engraved on the back of the watch “Head, heart, hands, health (the 4 h’s); presented by Mrs. Charles Walgreen to Helen Prevatte.”

Although she didn’t keep the watch, Wooten did keep a box full of loose materials such as letters she had received regarding awards, newspaper articles featuring her project, photos and even the official 4-H coupon book she used for meals during her Chicago trip. McClellan was interested in preserving these items which would not be sent to the museum. As a project meant to teach one of his summer interns, Olivia Horning, about the importance of 4-H records, he asked her to make a scrapbook with the box of papers and items.

Wooten saw the finished scrapbook for the first time on the evening of July 27 at Oak Park Retirement Home’s Fireside Chat. McClellan presented Wooten with the scrapbook as well as speaking to Oak Park residents about his journey with Wooten over the past few months.

“I’m very humbled by all of this. I really am,” Wooten said. “Hopefully it will all mean something to some young person today.”