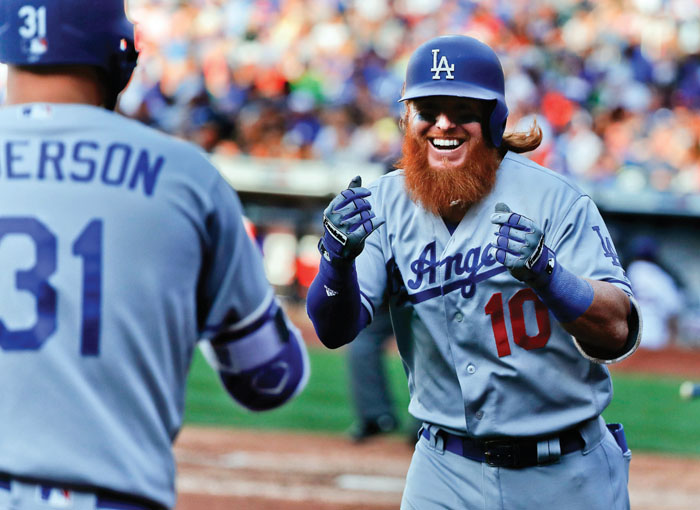 NEW YORK (AP) — Early on, everything went wrong for the Los Angeles Dodgers. They gave up three home runs in the first inning, were held without a hit until the fifth.

And then that big blue machine came storming back.

Yasiel Puig hit a tiebreaking homer in the seventh and the resilient Dodgers went deep five times, rallying past the New York Mets 7-4 on Saturday to extend their incredible surge.

Chris Taylor, Justin Turner, Corey Seager and rookie Cody Bellinger also connected for the Dodgers, who are 43-7 since June 7. That’s the best 50-game run by a big league team since the 1912 New York Giants compiled the same mark from May 14 to July 3.

“Got ‘em,” Turner said with a smile through his bushy red beard. “It’s definitely something that down the road is going to be cool to talk about for a long time.”

That team — led by Don Drysdale, Sandy Koufax and NL MVP Maury Wills — didn’t even win the pennant after dropping a best-of-three playoff to rival San Francisco. This year’s Dodgers are looking to end a World Series drought that dates to the franchise’s last championship in 1988.

“It’s a wave that we’re riding,” manager Dave Roberts said. “I know our players and they realize that we haven’t done anything yet.”

Leadoff man Michael Conforto, Wilmer Flores and Curtis Granderson homered in the first off Dodgers lefty Rich Hill, the NL pitcher of the month for July.

“You’ve got to keep going the whole game,” Lugo said. “I think we got a little complacent. They didn’t.”

Taylor homered leading off the sixth, connecting in a third straight game for the first time in his career. One out later, Turner singled and Bellinger nearly went down to one knee to lift his 31st homer over the right-center fence, tying it at 3.

“Man, it’s been fun,” Bellinger said. “Both sides of the ball as a team are clicking. So I think we’re just trying to ride it out as long as we can.”

Puig hit his 21st of the season leading off the seventh against Paul Sewald (0-4), lining a laser shot to left field for his second homer in two games. Turner sent a solo drive to center off Sewald in the eighth, and Seager added a two-run homer into the second deck in right field against Fernando Salas in the ninth.

“We’re just very confident. We understand at any point in the game we can go off,” Taylor said. “There’s just a feeling like, we’re going to come back at some point.”

CHICAGO (AP) — Willson Contreras homered and drove in three runs, Alex Avila homered for his first hit with the Cubs and Chicago beat Washington to even the series between division leaders.

Kris Bryant and Jon Jay each added a run-scoring hit as the Cubs snapped a three-game losing streak.

CLEVELAND (AP) — Brett Gardner and Ronald Torreyes made sensational defensive plays in the ninth inning to save Aroldis Chapman from another late-inning meltdown in Progressive Field, and New York hung on to stop a four-game losing streak.

Chapman (4-2), making his first appearance in Cleveland since Game 7 of last year’s World Series for the Chicago Cubs, allowed a leadoff single in the ninth before Jose Ramirez hit a fly to deep left that Gardner grabbed with a jump on the warning track. Edwin Encarnacion then hit a blooper toward right that Torreyes ran down with a dive.

Pomeranz (11-4) gave up Tim Anderson’s homer on the second pitch of the game, but didn’t allow another run before leaving with a 4-1 lead with one out in the seventh. Since starting the season 3-3, Pomeranz has lost just once in 15 starts.

ST. PETERSBURG, Fla. (AP) — Zach Davies gave up one hit in seven innings and Milwaukee remained a half-game behind NL Central-leading Chicago after a victory over Tampa Bay.

It was the second straight shutout for the Brewers, who have given up only one run while winning three straight.

Goins hit the two-out single to left field off Francisco Liriano (6-7), and Rob Refsnyder touched home plate with his left hand just before Brian McCann tagged him. The Astros challenged the call, which stood after a nearly two-minute review.

MINNEAPOLIS (AP) — Cole Hamels threw the 16th complete game of his career — his first in nearly two years — and turned in his most efficient start of the season to lead Texas past Minnesota.

With Hamels dominating on the mound, Nomar Mazara’s first-inning, two-run homer off Kyle Gibson (6-9) was all the offense Texas needed to beat the Twins.

PITTSBURGH (AP) — Rookie Dinelson Lamet allowed just one hit in 5 2/3 innings, Wil Myers broke out of a slump with a home run and three RBIs and San Diego quieted  Pittsburgh.

Miami led 1-0 in the sixth when Giancarlo Stanton slugged his 36th homer, most in the majors. One night after homering twice, Stanton crushed Foltynewicz’s fastball deep into the seats in the left field, but the Braves took a 2-1 lead in the bottom of the inning on Freeman’s RBI single and Nick Markakis’ RBI double.

Freeman hit his 20th homer and Brandon Phillips had a two-run single in a five-run seventh.

Foltynewicz (10-6) struck out eight of the first 12 batters he faced. He allowed four hits and one run in 6 1/3 innings and did not issue a walk for the first time in 15 starts.

Lynn (10-6) retired 12 of the last 14 batters he faced, walking Votto twice. The right-hander limited the Reds to three hits and a run with three walks and four strikeouts.

Seung Hwan Oh allowed a harmless two-out single in the seventh, Tyler Lyons struck out all three batters he faced in the eighth – including Votto looking to end the inning – and Trevor Rosenthal worked around a walk and a single in the ninth for his eighth save in 10 chances.

The win was the Cardinals’ first in six games at Cincinnati this season and the first in their last six overall decided by more than one run.

How ‘bout that Cowboy: Jerry Jones inducted into Hall…