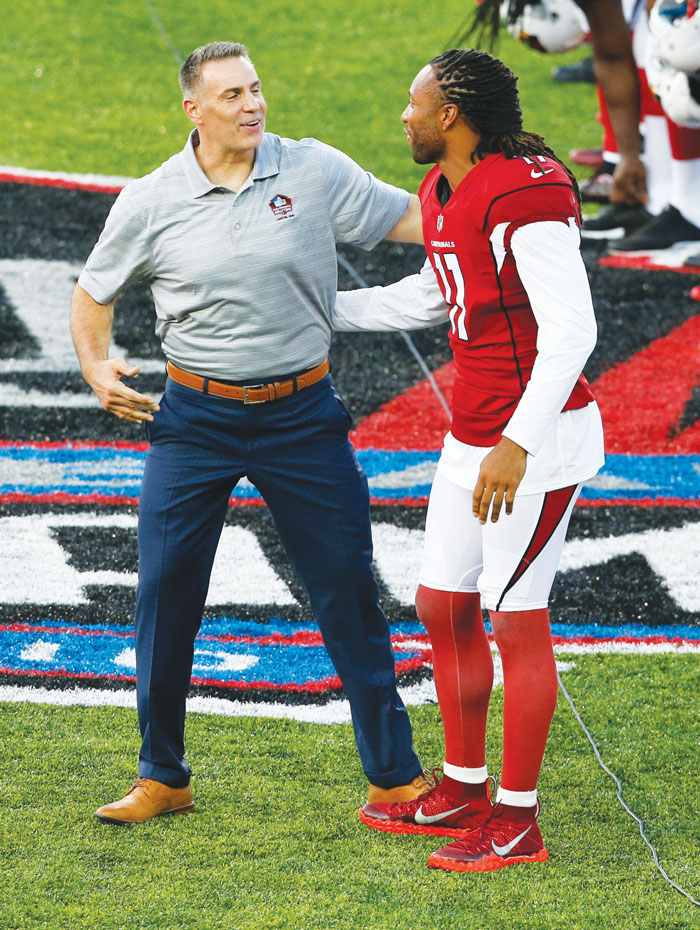 PHOENIX (AP) — Kurt Warner was 28 years old before he became a starting NFL quarterback, a late start for a Hall of Fame career.

Before that came one season as a starter at Northern Iowa; time stocking grocery shelves to make ends meet; three years of Arena Football; and one year in NFL Europe.

It’s a remarkable journey that led him to three Super Bowls with two franchises. He won one Super Bowl, was voted NFL MVP twice and Super Bowl MVP once.

And he might not have gotten the opportunity had St. Louis starter Trent Green not gone down with an injury in 1999.

Suddenly Warner was a starter, and the Rams took off, evolving into “The Greatest Show on Turf.”

By the time he called it quits after the 2009 season, he had led the Rams to two Super Bowls, winning one, and had guided the long-downtrodden Arizona Cardinals to their only Super Bowl appearance, nearly winning it.

He appreciates that Hall of Fame voters were able to look beyond his statistics, which he acknowledges don’t approach those of many of the game’s greats.

“They felt that they couldn’t write the history of professional football without me,” Warner said in an interview with The Associated Press. “I’m very honored and humbled that anybody — but that a collective group of people — felt that way.”

In between St.  Louis and Arizona was a brief stop with the New York Giants, where his style didn’t really fit the system and he was benched in favor of rookie Eli Manning.

Warner was looking for work after that and wound up in Arizona with a franchise with a history of failure.

But in 2008, he took the Cardinals on an unexpected run to the Super Bowl and a narrow loss to Pittsburgh.

In that run, the combination of Warner to a young Larry Fitzgerald was the greatest passing duo in any single postseason.

“You could see the two-time MVP, Super Bowl champion, Super Bowl MVP, you’re kind of just in awe,” Fitzgerald said. “And then you get to know him as a man, you see how humble he was and how down to earth, approachable, family oriented, just a wonderful teammate. You just gained more respect for the kind of person he was. Then how he pushed me to get better, how to play this game.”

“I didn’t get the opportunities everybody else did,” he said. “Even in the middle of my career I had some crazy things happen where some of those opportunities were taken away from me. But when I played the game, when I stepped between those lines, I took advantage of every opportunity.

“And I think I played this game the right way and as well as anybody that’s ever played it.”

He looks at his long climb to the NFL as a succession of success stories.

“I sat on the bench for four years in college (Northern Iowa), but the one year I played I was player of the year in my conference,” he said. “Then I went to Arena Football. I played three years. I was in the championship game twice and was voted the best quarterback in Arena Football during my time there. I went to Europe for a year, was the best quarterback statistically in the one year that I played there.”

In other words, all he needed was a chance.

Torry Holt was a rookie wide receiver for the Rams when Warner became the starter.

“When things happened to Trent and Trent went down,” Holt said,”Kurt’s number was called and he was ready. He came in and we never skipped a beat. With the way he prepped, his attention to detail and his love and passion for football and for quarterbacking was dead on.”

In his first year as an NFL starter, Warner led the Rams to the Super Bowl, finishing with a dramatic win over Tennessee in an MVP performance.

St. Louis made it to the Super Bowl again in the 2001 season, but lost to New England.

Arizona was long considered a laughingstock of ineptitude. But not with Warner at the controls.

In 2008, there were some ugly losses but enough wins to take the NFL West title at 9-7. Some considered the Cardinals the worst playoff team in league history.

But with the Warner-to-Fitzgerald connection working magic, Arizona went on a run that didn’t end until the close Super Bowl loss to Pittsburgh.

Warner’s last game at home came in a playoff contest against Green Bay in the 2009 season. The Cardinals won 51-45 in overtime. Warner had more touchdown passes (five) than he did incompletions (four). He said it may have been the best he’s ever played.

He was brutally beaten down in his final game at New Orleans. But he’d already decided it was time to go.

Now he has an NFL Network gig and lots of time to devote to his family and his Christian faith.

Warner and his wife Brenda operate the First Things First Foundation, using their values as a guide for helping people in need.

“I had plenty of lousy football games, but I don’t feel there’s any blemishes on the character,’” he said. “When it’s all said and done at the end of the day, that is by far the thing that I’m most proud of.”

Panthers hold Fan Fest, but Cam held out of…