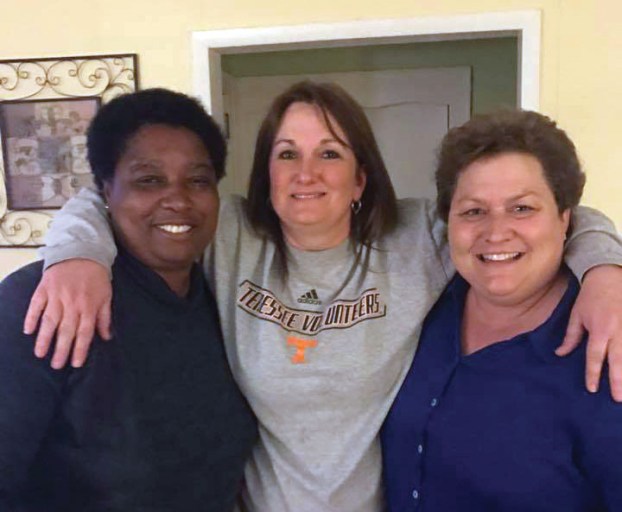 Starr Forney, the brightest star you ever met

They were referring to Starr Forney. The physical education teacher and coach had a way with kids. First, they knew not to test her, and if they did something wrong, they realized there would be consequences.

“She could be stern, and she could get a point across,” says Allison Dupree Adams, a fellow physical education teacher at Erwin. “… If we ever had a kid we were having a hard time with, we would send them to her and the problem got straightened out.”

With her voice and demeanor, Forney could get on a microphone and silence a gymnasium full of students within 15 seconds. During a gym class, she might send a kid into a corner as punishment, but it wasn’t unusual to see her hugging that same kid by the end of the period.

Forney had a way of winning people over, no matter what their age.

“She was just the kind of person who if you knew her for 5 minutes or five years, she left an impression,” Adams says. “She had a way of bringing out the best in people. I think she did that with friends, family and co-workers.

“I think she did it with people she met just a couple of times.”

The eastern Rowan County community was left in shock this week, hearing the unexpected news that Forney, 52, had died Tuesday at her home off Dunn’s Mountain Road.

As an athlete at East Rowan High, she played volleyball, basketball, softball and track. She was accomplished at throwing the discus and shot put. As an adult, she made many friends playing women’s and co-ed softball.

For a time, she assisted women’s track coach Lu Gamewell at East Rowan High. Gamewell says she only tolerated the loss of Forney because she knew she was going to the middle school, which would be feeding athletes to her.

Forney had a way, Gamewell says, of talking kids into doing things they didn’t think they could do, or talking them out of things they shouldn’t be doing.

“She had this big laugh.” Gamewell said. “If she laughed, it would make you laugh. She was a mess. We all loved her and the kids loved her, and she was great to work with.”

There was no denying, Forney had a big personality.

“Her name is fitting for her because she is the brightest star I ever met,” said Lisa Long Giles, probably Forney’s closest friend.

People are being asked to wear Carolina blue to a community vigil being held in Forney’s honor at 7 p.m. Sunday at the East Rowan High track.

A funeral service is planned for Forney at 1 p.m. Wednesday at New Zion Baptist Church on Dunn’s Mountain Road. A viewing will be held at noon at the church on the same day.

In 1989, Starr Forney wanted to play for the Jim’s Barbecue softball team. But Giles, who already played for Jim’s, didn’t think Forney would be a good fit.

Giles had watched Forney play for rival teams and always was a bit intimidated by her. When her fellow players were taking a vote on whether to add Forney to the Jim’s Barbecue team, Giles was the first to vote “no.”

But Forney won over the other players, and from their first practices and games together, Giles knew she had been wrong. “I thought, ‘She’s a big pussycat,'” Giles says.

Giles and Forney quickly became best friends, even after Giles moved back to her native Tennessee. Over the years, they traveled to at least 25 different states together. They learned to snow-ski at the same time. They regularly went on cruises.

Forney became like a second mother to Giles’ three children, who liked to say they had a white momma and a black momma.

Just this summer, Forney had spent a month at Giles’ home in eastern Tennessee after they had returned from one of those cruises. As they sat every morning on the porch, the women planned where they would travel next.

This coming Christmas, another cruise with Lisa’s mother-in-law was planned. Next summer, they were going to Yellowstone National Park, and they already were trying to line up lodging.

Every April, during Starr’s spring break, she, Lisa and two other women would spend some time in Charleston, S.C. Forney had a weakness for chicken wings, ribs and fancy hamburgers, and one of her favorite things was to try new restaurants.

“She loved old stuff — old cars, old churches, graveyards,” Giles adds. “… If Starr was on vacation, it was with me.’

Forney sometimes had famous fights in the back seat with Giles’ 12-year-old son over the card game Uno, when the Giles and her husband were driving somewhere on a trip — with Forney, of course.

When the two friends sat on Giles’ porch in Tennessee, they often talked about their almost 30 years of friendship and all the stuff they had done together.

“Starr’s life was an adventure,” Giles says. “She loved life.”

In high school, Kim Caldwell at South Rowan High often found herself competing against Starr Forney at East Rowan High. They were rivals in basketball, softball and track.

Later as adults, they were competing against each other again in co-ed softball.

But when Caldwell and Forney first met, they clicked right away, Caldwell says. “We were so much alike.” she adds.

One thing led to another in their teaching careers. For a time, Caldwell was track coach at Southeast Middle School, but eventually she was able to join the staff at Erwin, where she is girls basketball coach and assisted Forney with the track team.

Forney walked by her special needs classroom every day and shouted, ‘What’s Up, Girl!” And whenever Forney was amazed at anything, she would proclaim “Holy cow!”

“I’m going to miss all of that,” Caldwell says of her friend’s enthusiasm.

Another thing Forney liked to say was, “I’ll knock you out,” especially when Caldwell, who didn’t have a coaching office, would move her things into Forney’s tight space.

“She could fuss at them and chastise them, and they would come back to her with questions, and it was like they forgot what happened,” Caldwell says.

Forney attended college at Wingate University and got her teaching certificate from Pfeiffer.

“If anybody needed anything,” Adams says, “she would be the first to step in.”

Erwin needed a cheerleading advisor one winter, and Forney told Adams, “I can sit up there and watch them cheer,” because she liked basketball and wouldn’t mind yelling at the referees, too.

Forney still lived in the Dunn’s Mountain Road house she was raised in. She had come home from Giles’ home in Tennessee to check on her mother, who lives in senior housing in Salisbury.

Giles said Forney had planned to return to Tennessee this weekend.

Though she was never a biological mother, Forney was a mom to many, including two nephews. One of those nephews discovered her body Tuesday at the Dunn’s Mountain Road house.

Forney’s death caught everyone by surprise. Adams says Forney told her Friday that she had just completed a physical, complete with blood work, and everything was perfect.

Giles noticed a couple of weeks ago that Forney was out of breath climbing the steps to a zip line at the National Whitewater Rafting Center in Charlotte. They both agreed that was unusual for Forney.

“It’s just eating me alive thinking I missed something,” says Giles, who is an emergency room nurse.

It wasn’t long ago, Giles says, that she and Forney were sitting in her living room, and Forney was talking about moving to Tennessee when she retired. The women agreed they wouldn’t know what life would be like without each other.

The deaths of Gill, Robertson: ‘It’s tough for all of us’