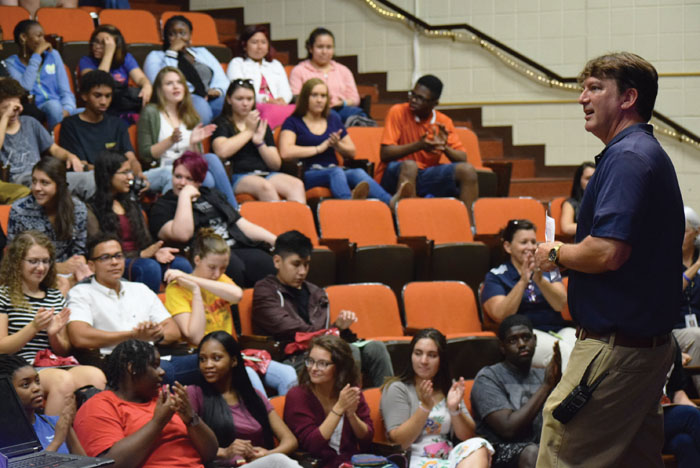 SALISBURY — There are still four more weeks of summer — for some students. But Friday morning, Rowan County Early College was already back in session.

The high school is closely aligned with Rowan-Cabarrus Community College, and follows its schedule, rather than the local school system’s. Rowan-Salisbury Schools resume classes Aug. 28.

This year, 238 students filed into the auditorium on the community college’s campus to get the rundown on new rules, events and staff. Keeping with a longstanding school tradition, students stood to their feet and clapped and cheered as this year’s crop of seniors entered the room to take their seats.

Principal Patrick Hosey kicked off his second year manning the helm with some good news: for the first time in its history, the early college has a spirit rock.

New signs identifying the mobile pods which serve as the high school’s campus have also been installed. Both measures go towards making the early college look like “an official school,” Hosey said.

“We’re trying to make you feel like a cohesive group,” he told students.

Hosey also encouraged students to be on their best behavior, and to work hard in their high school and college classes.

“Good grades in college classes translates into where you want to go to a four year,” he reminded them.

Last year, he said, approximately 92 percent of the schools seniors went on to a four-year institution.

“There’s a lot of good things happening,” he said of the school.

The upcoming year will also bring changes to the small school. Beginning this year, students will no longer take their meals in the community college student center, but will instead have their own cafeteria space. The site is currently still under construction.

Staff and students are also starting a campaign to name the school’s mascot.

Hosey himself is excited for the upcoming school year.