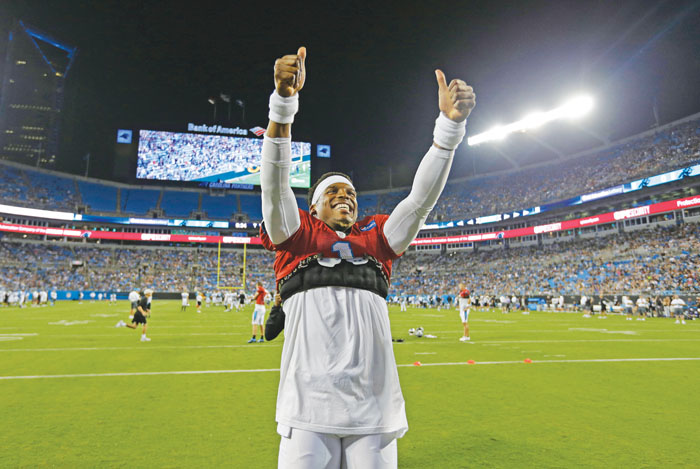 AP Photo/Chuck Burton ... Carolina Panthers’ Cam Newton gives fans two thumbs-up after encouraging them to perform a wave during practice at the NFL team’s Fan Fest in Charlotte last night. The Panthers play their first preseason game next Wednesday, at home against the Houston Texans.

CHARLOTTE (AP) — Cam Newton wasn’t able to throw Friday night, but that didn’t stop the charismatic quarterback from hamming it up with fans.

In what has become a tradition at the team’s annual Fan Fest practice at Bank of America Stadium, Newton did his best to entertain the crowd. If he wasn’t dancing in pre-game warmups to “Bad and Boujee,” the seventh-year quarterback was playing the role of “crowd conductor,” using his arms to direct the 58, 568 fans to stand, yell and do the wave. At one point Newton got two waves started at once, heading in different directions around the stadium.

“He is a dynamic personality,” Panthers coach Ron Rivera said.  “And we have a great fan base here that really supports this football team. I think it’s kind of neat. He’s engaged and that’s a big part of it with our fan base.”

Newton didn’t participate in passing drills for the fourth straight day because of soreness in his surgically repaired right throwing shoulder and Rivera offered no guesses on when he expects the former league MVP to start throwing again.

But despite not throwing Rivera said Newton has been dialed in and has had a good week.

“There are some things we do that you guys don’t get to see but he’s really on top of it and I can’t wait for them to clear him to start throwing again,” Rivera said.

Newton had surgery in March to repair a partially torn rotator cuff but started throwing at the beginning of training camp. However, he developed some soreness late in practice Sunday. The team had a day off Monday, but Newton hasn’t thrown since.

It remains unclear if he’ll play Wednesday night in the team’s preseason home opener against the Houston Texans.

Newton and other players were not available for interviews after practice as the security guards quickly cleared the field for a fireworks and laser show.

Derek Anderson continued to run the first team offense with Joe Webb also getting an increased number of reps.

Fan Fest has become a big hit in Charlotte and for the first time the team charged a $5 admission to get in.

The Panthers hold training camp practices in Spartanburg, S.C., but always return to Charlotte for one night. Despite a 6-10 season in 2016 the Panthers had a huge turnout Friday night.

It was a reunion of sorts for two veteran players and a first chance for Carolina’s rookies to see where they’ll be playing this season.

Julius Peppers and Captain Munnerlyn made their return to Carolina this offseason after playing for other teams and received a warm ovation from fans. Some fans even dusted off their old No. 90 Peppers jerseys and wore them.

Peppers, the team’s all-time sack leader, received a particularly loud ovation when introduced. He did not practice as he was given the night off.

It was a new beginning for first-round draft pick Christian McCaffrey, who didn’t waste any time showing off his speed and athleticism, turning a play up field on a pass in the flat. The crowd cheers as McCaffrey was shown on the videoboard.

The Panthers have Saturday off and return to practice Sunday at Wofford College.

NOTES: Matt Kalil returned to practice after missing most of the week with a groin injury. …. Rookie wide receiver Curtis Samuel remains out with a hamstring injury.

PITTSBURGH (AP) — Mike Tomlin’s strong first decade with the Pittsburgh Steelers has earned the coach the chance to work well into a second decade with the organization.

Tomlin and the team have agreed to an extension that will keep the 45-year-old in Pittsburgh through the 2020 season.

Tomlin is 103-57 in 10 years with the Steelers, who have captured one Super Bowl, been to another and earned five AFC North titles during his tenure. He is one of eight coaches to win 100 games in their first 10 seasons.

Steelers President Art Rooney said Tomlin “continues to prove he is one of the top head coaches in the National Football League.” Pittsburgh went 11-5 in 2016 before falling to New England in the AFC championship game.

Tomlin called his 10 seasons an “amazing experience,” adding his focus is on helping the franchise win a seventh Super Bowl.