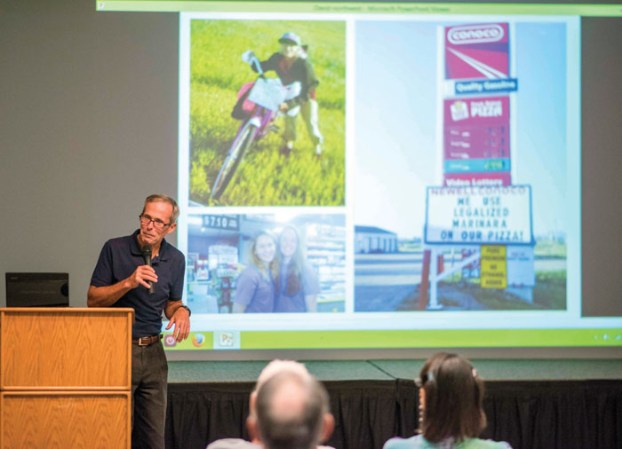 JON C. LAKEY / SALISBURY POST A reception was held at the Rowan Public Library for cross country cyclist David Freeze. Freeze spoke about his most recent trip and hinted at where would be his next one. Wednesday, August 2, 2017, in Salisbury, N.C.

Freeze enjoys the telling as much as the cycling

SALISBURY — The Cascade Mountains were grueling. He could go miles and miles without seeing a single soul or building. And four miles from the finish line, his back tire went flat.

But if you ask David Freeze of China Grove about the latest of his five long-distance bicycle trips, he’d be happy to tell you about it.

“It’s almost as fun to talk about it as it is to do it,” Freeze told an audience of 45 on Wednesday at Rowan Public Library. Recently returned from a nearly 3,000-mile trip from Anacortes, Wash., to Green Bay, Wisc., Freeze talked about the experience at a reception sponsored by the Salisbury Post.

Throughout his trip, Freeze sent nightly reports to the Post to be published in the next day’s paper. Most of the people at the reception had followed his progress daily.

This was the fifth summer sojourn for Freeze, 64, who calls himself a part-time farmer and full-time fitness buff. Though known as a runner, his solo trips have covered more than 15,000 miles. Here’s the rundown:

This year’s route was going to be nearly a straight shot from Anacortes to Green Bay until Freeze decided to add a roundabout 700-mile stretch.

“There were a lot of things I wanted to see that I couldn’t see if I went that way,” he said.

For starters, he would have missed three states — South Dakota, Nebraska and southern Minnesota. Freeze and his bike have now been in 45 states, missing only Nevada, Utah, Vermont, Alaska and Hawaii.

He would have missed seeing the day’s first rays of sunlight hitting Mount Rushmore. Other South Dakota sights included the Crazy Horse Memorial and historic Deadwood.

And Freeze would have missed his first taste of Twin Bings, a confection of cherry nougat, chocolate and peanuts that he declared “one of the best candies I have had.”

Considering Freeze’s enthusiasm, the Post ordered a box of Twin Bings to share with reception guests. Freeze got a few to take home.

Freeze described his journey from beginning to end, showing photos along the way. The Cascades were so steep that he felt like he might slide off the back of his bike, he said. He saw snow as deep as three feet. When he went through Washington Pass, with an elevation of almost 5,500 feet, the temperature was 37 degrees.

Many days later, he would cycle through nearly 100-degree heat in drought-stricken Nebraska.

And then there was “the toughest storm I’ve ever been in in my life,” with big winds, heavy rain and lightning. Someone later asked why he didn’t get out of the rain, he said. “There was nowhere to get out.”

Montana was absolutely beautiful, South Dakota had bad roads but beautiful scenery. North Dakota didn’t have much, Freeze said, but he did come across a Zesto restaurant that was still open — Salisbury’s Zesto closed decades ago — and the Roger Maris Museum.

He noted where he got this trip’s first pineapple milkshake — an on-the-road staple for Freeze, who didn’t eat much ice cream before he started these summer sojourns made him a convert. “If it’s not too cold, I can hardly ride by a Dairy Queen.”

Freeze frequently encountered — and ignored — detour signs for road construction. “My thinking usually is to ride through and see what happens,” he said.

That almost got him into trouble. As he made his way along one closed road, people stopped him and told him he wouldn’t be able to make it through. Freeze pushed on and finally encountered the problem — a huge hole where the road had washed out in a heavy rain.

Freeze said an engineer in charge of construction at the site said he could not allow Freeze to go through and then asked, “But what are you doing?”

Freeze explained his annual journey, that he likes the adventure of it and sends a write-up to the paper back home each day.

“Sounds good,” Freeze recalled the engineer saying, “but you still can’t go through.”

To cut to the chase, Freeze did eventually go through, walking his bike through steep terrain. When he got to the end, the engineer pulled up beside him. “He wished me a safe ride,” Freeze said, and quoted the man’s last words to him. “Don’t you ever tell anybody my name.”

Freeze met other interesting people along the way, such as the three young doctors who had just completed all their training and were cycling from Seattle to Boston during their last free summer.

A 74-year-old man who cycled through a hilly area without getting winded impressed Freeze until he realized the man’s bike had an electric motor.

A young woman running a bakery in the middle of nowhere — “not a town within 30 miles on either side” — said the last cyclist who came through bought a pie and ate the whole thing right there.

Even a sign could be entertaining. One posted at a convenience store in Newell, S.D., said, “We used legalized marinara in our pizza.”

As for the total mileage of this trip, Freeze said he was a little disappointed that it came to less than 3,000, but the device he was using would only measure one day’s journey at a time. He kept a log, added up the daily figures at the end of the the trip and came up short.

Maybe he should have taken one or two of those detours.

By Rebecca Rider rebecca.rider@salisburypost.com SALISBURY — There are still four more weeks of summer — for some students. But Friday... read more