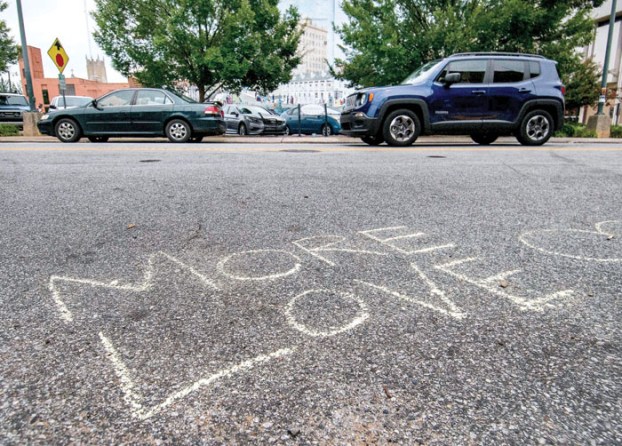 The sidewalks and street in front of Go Burrito on West Fisher Street in Salisbury were covered with chalk hearts, a bible verse and pleas for love afte, two people were killed and several injured just outside the restaurant. Jon C. Lakey/SalisburyPost

The deaths of Gill, Robertson: ‘It’s tough for all of us’

SALISBURY — Anthony Gill, laid to rest Thursday afternoon in Oakwood Cemetery, was remembered by a cousin as a good, happy person who seemed to be friends with all.

“He wasn’t a trouble person,” said Bianca Koontz, who liked to refer to the 22-year-old Gill as her “baby cousin.”

But it was trouble that found Gill and roommates Da’Quan Robertson, 23, and Quandarius R. Davis, 22, when gunfire erupted early Saturday morning along the 100 block of West Fisher Street.

The shootings led to the deaths of Gill and Robertson. Davis and a woman, 20-year-old Kayla Bennette McCullers of Dallas, N.C., were wounded, but their injuries are not life-threatening.

Da’Quan Robertson’s mother, Crischelle Patterson, said her son “was loved by everybody.”

Robertson, 23, had played football and basketball and run track at Salisbury High School, where he earned the nickname “Quick.” He worked at Fresh House Produce and had many friends in the community, his mother said. Salisbury Post file photo
Da’Quan Robertson ‘always had a smile and a joke for everybody,’ says his mother, Crischelle Patterson. He played basketball and football and ran track in high school.

Patterson said Robertson asked her on Mother’s Day to take a picture of them together, to show how much he loved her. Patterson says she treasures that picture, just as she cherishes every memory she has of her son.

“The whole city of Salisbury couldn’t say anything bad about him.” Patterson said.

Tuesday, Salisbury police arrested Jalen L. Cook, 23, and Zakelo Duren, both of Salisbury, in connection with the shootings. Authorities charged Cook with two counts of murder and assault with a deadly weapon. Duren was charged with inciting a felonious riot.

Koontz stressed Thursday that her cousin Gill did not start whatever happened last Saturday morning on West Fisher Street and that he became a victim by being in the line of fire between other people.

Koontz also emphasized that the shooting was not gang-related, but rather a story of jealousy and a “domestic dispute” instigated by Cook’s sister.

“I want her to be charged,” Koontz said. “She’s going to be held accountable for this.”

No other arrests have been made or suspects identified in this case to the Post.

Koontz said Gill, who often would baby-sit her children, left her residence about 1:30 a.m. Saturday and said he was going to Go Burrito! on West Fisher Street with friends. He also mentioned it was karaoke night at the restaurant.

The shooting occurred about 2:13 a.m. in the 100 block of West Fisher Street near the mural.

Koontz said if she could go back in time, she would tell Gill, “Go home; don’t go up there.” Submitted photo
Anthony Gill ‘was just a noble person — very respectful, treated everybody the same,’ said his cousin Bianca Koontz. He would often baby-sit for her children.

Koontz said Gill had been living in an apartment with Robertson, Davis and another guy for about a year. Before that, he resided with Koontz’s mother, Annie Partee, who provided a home for Gill after his mother (Annie’s sister) died of cancer several years ago.

Gill and Robertson both played football at Salisbury High and were good friends.

Gill was part of the Junior ROTC program at Salisbury High and still talked on occasion about possibly joining the military. He liked to play video games and was always part of family holiday gatherings, Koontz said.

Koontz works a first-shift job, and she often called on Gill, who was unemployed, to help her look after her kids, even make sure in the mornings they were on the bus for school.

Koontz said she will miss Gill’s smile the most.

“He had big brown eyes and a friendly smile,” she said. “Every Friday was wash day, and he would come to my house to wash his clothes. He was always there, and I’m really going to miss those times — especially looking up and seeing his smile.”

“… He was my favorite cousin. He had no enemies.”

The Rev. George Bates and Danielle Burrs were among the speakers at Gill’s funeral Thursday.

“He was just a noble person — very respectful, treated everybody the same,” Koontz said.

Patterson, Robertson’s mother,  said the legacy her son left behind is one of kindness and happiness.

“He always had a smile and a joke for everybody.” Patterson said. “He had a beautiful smile.”

While playing football in high school, Patterson was named as one of the Post’s Friday Night heroes for his performance as safety in a big conference game against Lexington. Then-Salisbury High football coach Joe Pinyan said afterward Robertson was “one of the best unheard-of athletes in the school.”

In a player profile in 2011, Robertson listed Salisbury’s 2010 state championship in football as his greatest accomplishment to that time. That was before his 2012 accomplishments in track.

Robertson also mentioned his love for his grandmother’s cooking, said his hidden talents were singing and rapping, and wrote down his personal motto as “Go hard or go home.”

Robertson had a love for Duke University basketball. The words that best described him, Robertson said in 2011, were “quick,” “handsome” and “devoted.”

Wayne Pickler had a big appetite for life, a big heart for others

ROCKWELL  — Wayne Pickler was never cheated at life. “He flew by the seat of his pants,” said his wife,... read more