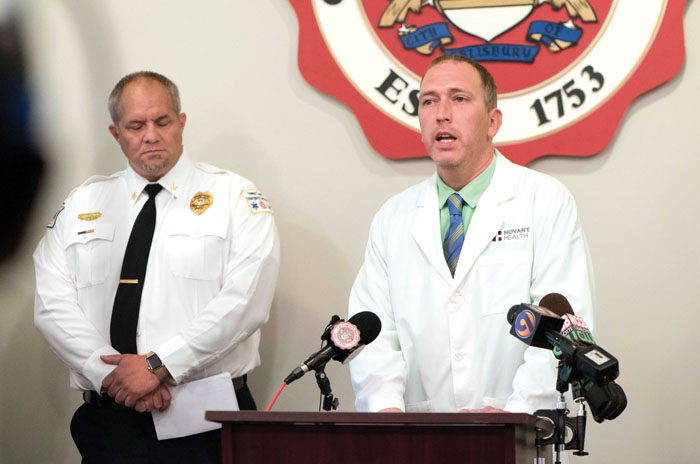 SALISBURY — In the 1990s and early 2000s, the Rowan County Sheriff’s Office didn’t see a lot of heroin on the streets, and it wasn’t readily available.

The prescription drug abuse that is widespread today wasn’t an issue then, said Sheriff Kevin Auten, who was a narcotics detective back then.

“I can count on one hand the number of times we seized heroin in the late ’90s and early 2000s. It just wasn’t available and wasn’t a problem on our streets. But that’s changed drastically,” he said Thursday during a joint news conference addressing the local opioid epidemic.

Auten said 10 years ago, the Sheriff’s Office responded to 31 drug overdose cases in a year. As of Thursday morning, it had responded to 73 in the county this year.

In 2016, the Sheriff’s Office responded to 94 drug overdose calls.

“It was our busiest year,” Auten said.

“Statistically, Rowan County is in the top five for opioid addiction and overdose problems that are occurring in our community. We really want to bring attention to this dangerous drug problem,” said Salisbury Police Chief Jerry Stokes.

He said officers are getting double the calls related to drug overdoses compared to last year. The overdoses are attributed to heroin laced with fentanyl, with the street name of gray death.

The Police Department and other agencies a few weeks ago charged a Salisbury man, Demario Antoine Morrow, with possession of heroin laced with fentanyl, among a number of other drugs.

Between 2013 and 2015, the number of deaths involving heroin slightly more than doubled in North Carolina. He said data from the N.C. Division of Public Health shows there were 545 ER visits for opioid overdoses in North Carolina in June 2017 compared to 356 in June 2016.

There were 384 visits for heroin overdoses in North Carolina this past June compared to 172 in June 2016, a 223 percent increase.

In Rowan County, there have been 45 heroin or narcotics overdoses in the past two months. In June, the county was No. 6 in the state in terms of opioid overdoses per capita.

Davidson County was No. 1, and Cabarrus, Guilford and Mecklenburg were in the top seven.

In 2016, there were 292 calls for service in which Rowan County EMS administered Narcan, a prescription drug used to treat narcotics overdoses in emergencies. This year through June, there have been 284 calls. Battalion Chief Chris Richardson said there has been an increase even from three years ago. In July 2015, Rowan EMS administered Narcan seven times. In July 2016, that number more than doubled to 16 calls. In July of this year, there were 66 calls to administer Narcan.

Bream said the rate that Rowan EMS has administered Narcan is on track to almost double this year.

“The more difficult issue is what can we do about it and how can we make a difference,” said Novant Health Rowan Medical Center President Dari Caldwell.

Caldwell said the hospital is trying to make resources available to help people who addiction problems.

“We recognize that with the huge increases you’re hearing about it, is difficult for the health care system to keep up with resources to help folks who have addictive problems. We have put together a pretty strong game plan for Novant Health Rowan Medical Center,” Caldwell said.

The hospital has a behavioral health unit with 20 beds that treats mental illness. By the end of the year, it plans to expand that unit to also include substance abuse as a primary diagnosis.

“That will be important in terms of once the patient comes in and they are medically stabilized, you still have the problem of how can we help these folks get off drugs, how can we help them with their addictive problem?” she said.

Once discharged from the hospital, where do they go for help?

“We have a number of resources in our community, but not enough. We will be opening an intensive outpatient program by the end of the year, which will be targeted at substance abuse,” Caldwell said.

This program will allow patients to be discharged from the hospital but come back daily for therapy, counseling and assistance for substance abuse problems.

The hospital received a $250,000 grant from the Cannon Charitable Trust to renovate a building on Mocksville Avenue, above the Community Care Clinic.

Adjacent to the outpatient program will be a psychiatric clinic that will also work with patients who have substance abuse problems.

Daymark Recovery Services also has seen an increase in patients who need help for substance abuse. In 2017, of the new clients that came to Daymark for services, half of them had an opiate abuse disorder.

Daymark is a comprehensive behavioral health provider that offers outpatient therapy and psychiatric services for people who are diagnosed with mental health or substance abuse problems.

Heather Hedrick, the Rowan Daymark center director, said it is working to expand the building to serve people struggling with addiction.

The centers are inpatient units operated by Daymark that can provide detoxification services as well as mental health stabilization. Another crisis center is in Cabarrus County, and one is scheduled to open at the end of August in Davidson County. Both are 16-bed units.