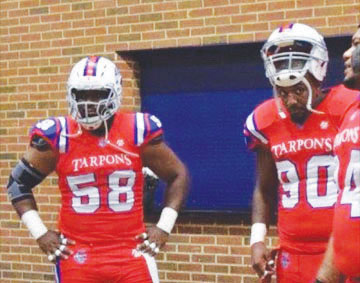 Brothers Cadarreus (58) and Devin (90) Mason both play for the Florida Tarpons in arena football. Submitted photo.

CHINA GROVE — There’s enough age separation between the 6-foot-2, 250-pound Mason brothers, Cadarreus and Devin, that their first game as teammates didn’t come until they were in their 20s.

That was a shared joy the South Rowan graduates had almost given up on, but they were reunited in the spring of 2017 as defensive end bookends for the Florida Tarpons in Arena Pro Football.

“At South, when I was a senior, Devin was still on the jayvee team,” Cadarreus said. “So this was like a dream having my brother as a teammate for the first time in a pro football game.”

The Masons played together in the league championship game, a 74-61 loss to the Richmond Rough Riders in June. That’s not a weird score for offensive-minded indoor football. The Tarpons (5-2) were good. Their only losses were to the undefeated Rough Riders.

Cadarreus was an all-county star at South. His senior season, the fall of 2009, was South’s last outstanding football run. Blake Houston was throwing passes to B.J. Grant, Thomas Lowe and D’Andre Harris were piling up rushing touchdowns, and Cadarreus and Mark McDaniel were leading a stingy defense for a 9-3 Jason Rollins-coached team that beat A.L. Brown, Robinson, Central Cabarrus and Statesville.

The final weeks of Cadarreus’ senior season were interrupted by appendicitis, but he had several scholarship options. He weighed about 240 then, but he was unusually mobile. He  headed to Division II UNC Pembroke as a combination linebacker/defensive end.

After a redshirt season, his college career blossomed. As a sophomore linebacker, he was the Braves’ leading tackler. Shifted to the defensive line for his last two years, he produced nine sacks. He made key tackles in playoff games, against powers such as North Alabama. He completed his time at UNC Pembroke with 174 total tackles and a degree in exercise physiology.

“I’m working now as a personal trainer,” explained Cadarreus, who was married in 2016 and has a child on the way. “Working with my clients helps to keep me in shape. I’m still training myself, still working out hard. You never know where Arena Football might lead. It’s opened doors for several of my teammates for tryouts with the Canadian Football League.”

Cadarreus has competed the last two seasons for the Tarpons, who play their home games at 7,000-seat Germain Arena in the small town of Estero on Florida’s Gulf Coast.

Devin was more of a late-bloomer than Cadarreus. His career at South was marked by slow, steady progress as he got bigger and stronger. He was up to 220 pounds by the time he enjoyed a breakout season as a senior for the Raiders, leading the team with 80 tackles. He was a fine student. That helped get him a shot to play for Division III Guilford.

Devin played in only one game as a freshman at Guilford, but his role grew each year. He played in six games as a sophomore. He was a regular his last two seasons in 2015 and 2016.  He contributed 40 career tackles to the Quakers with four sacks and 10.5 tackles for loss. He graduated with a degree in sports management and works now as a YMCA counselor in China Grove.

“I believed I’d played my last football when I finished at Guilford,” Devin said. “But then I got the call. The Tarpons knew Cadarreus had a brother who played and he got them some film of me. Then they called and said, ‘We’ve got to have you down here as soon as possible.'”

Devin debuted late in the 2017 season, but he made an immediate impact. He brought the same motor and mentality to the Tarpons that Cadarreus had demonstrated.

“I had three tackles, a sack and a fumble recovery in my first game,” Devin said.

And so the brothers were reunited in the wild and woolly indoor version of football, where $45 buys you a front-row seat and plenty of interaction with the players.

“Arena is intense,” Cadarreus said. “The field is shorter and the crowd is very involved. They’re right up on the wall and they’re talking to you. For me, that was fun. Even on the road, where they might be talking some trash to you, it’s still fun.”

Devin also enjoys that interaction, enjoys the fact that fans want to chat with players and have photos made with them after games.

There was a bus breakdown on the way to Richmond, but the Masons came close to winning a championship once they got there. The Tarpons actually went on top in the title game with 51 seconds left, but the Rough Riders scored two touchdowns in the final seconds, including a pick-six on the last play.

“It was neck-and-neck, came right down to the end,” Cadarreus said. “That was the first championship game I’ve ever played in, so it was a thrill even though we lost. They had a nice crowd up there.”

Devin shared a sack and made another fumble recovery in the championship game.

Devin has learned to love Florida and wouldn’t mind relocating to the Sunshine State at some point.

For the short term, both brothers plan to wear the multi-hued uniforms of the Tarpons again this spring. The season starts in March. The Tarpons are set to be part of of an expanded American Arena League organization that will include two divisions and 12 teams, seven of them in the northeastern part of the country.

“Arena football is pretty crazy, but it’s also very exciting,” Devin said. “This is a great chance to keep playing football — and to play with my brother.”